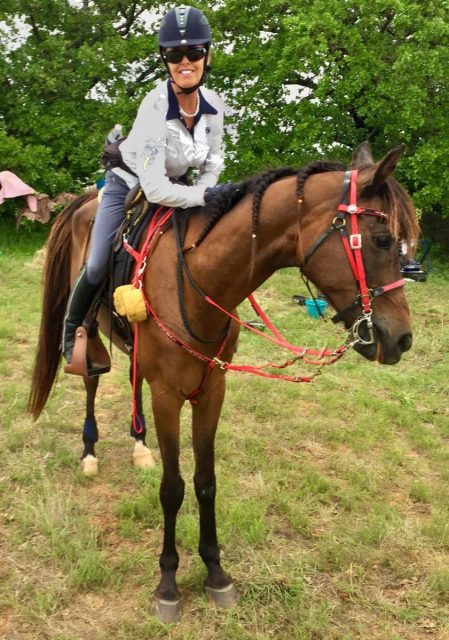 I would like to introduce Komanchi, who carried me for 100 miles last Thursday to win the FEI Lone Star Express 3* Endurance Ride in Texas. How amazing our equine partners are. Komanchi did this ride barefoot!

We set out at 6 a.m. warming up and began the ride at 6:30 a.m. in a large group. By 9 a.m. the group had spread out and we breezed through our first vet check after 22 miles. By 9 p.m. , after several vet checks and holds (where Komanchi rested, ate, rehydrated, got his legs got iced and received massaging) we set out into the dark to negotiate the final part of the trail.

The area had encountered a lot of rain so the footing was super slick and deep in many places. Most areas had a clay based soil which made it challenging given the rain. Komanchi stayed beautifully balanced and surefooted every inch of the 100 miles. We crossed rivers and rode over tall narrow bridges — yes, even in the dark. This ride used led lights instead of glow sticks to mark the trail which was terrific.

We crossed the finish line at approx 1:30 a.m. with a happy, sound horse. The final vet check deemed Komanchi “fit to continue” so we ended up winning the 3*! Komanchi received lots of pampering and returned to his paddock to rest by 4 a.m. What a star.

My day(s)’ work was not complete as I needed to prepare a few things for my young horses inaugural FEI ride ( 50 miles, a 1*) at 7 a.m. Al – Marah Speed (AKA Malone) had a very successful result, placing fifth out of approx 26 starters.

The most thrilling part of the few days was the vet’s complimenting Malone’s fitness. He pulsed in at 48 after one 22-mile trail loop. His ride card (which notes everything from horses attitude to tack rubs to gut sounds) received top marks. I was so proud of him. Malone has also started to event, having placed second at his first outing at Exmoor Horse Trials last month; he’s competing at Poplar Place H.T. May 6-7 .

I owe credit to my loyal sponsors: Tredstep Ireland ( whose paddock boots and breeches I rode in ); Voltaire Design, whose saddle I rode in in the 1* (unfortunately I have to ride in a really heavy saddle at at *** level to make the minimum weight of 165 lbs.); and Thin Line. Thank you!