Libby Henderson, creator of Higher Standards Leather Care has seen her business grow tremendously in the past year. After giving a few product samples to friends, her special leather products began to take off-- and became a big hit with members of the Chronicle of the Horse Eventing Forum. (See the "Review" topic which has grown to 56 pages with over 37,000 views). As eventers, we always have dirty tack, especially after cross-country, and what would be a better Christmas gift idea than some excellent saddle soap? We asked Libby a few questions and she was happy to discuss her business, the magic of her leather balm, and how it all started as a crush on Karen O'Connor's little bay horse, Upstage. 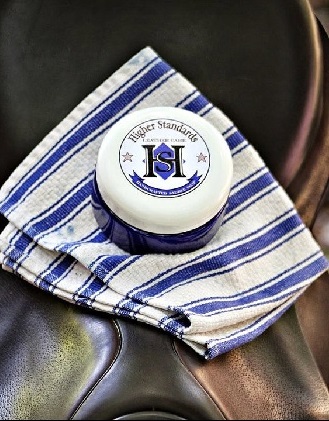 Q: Tell us a little about your business.  How did you start making saddle soap?  Where did the idea come from?

Libby: In 2003, I was looking for gifts to give barn friends for Christmas — I found a recipe for the homemade saddle soap, and gave that out that year, along with some homemade horse cookies.  I had taken a recipe for the soap, and altered it a good bit to get it to where I was happy with it, and then decided it would be fun to have saddle soap that smelled good too.  I learned some things about aromatherapy and essential oils and started experimenting.  During that time, I had developed a HUGE crush on Karen O’Connor’s horse Upstage — I’ve been the President of his fan club for a long time! I sent a care package to Karen at Rolex, with the homemade horse cookies, some people treats, and included a small tupperware container of the saddle soap (this is not quite as stalker-ey as it sounds, as I did know both Karen and Max — though I did claim and own, top stalker status for Woody!).

My friends had liked the soap, and I used it, but I was surprised when I saw Max in the Fall that year, and she asked for another tub of the soap — saying it was the best she had used.  So, from that point on, I made her several large containers a year, and made it for other friends and for myself, but didn’t think about marketing it.  Earlier this year, after Max had retired, we were talking about the soap and she encouraged me again to think about marketing it — I floated the idea to the Chronicle Eventing Forum, lots of people signed up for testers, and once the enthusiastic reviews came in, I decided to give it a try.  The crowdsourcing of ideas from other eventers has made this so much fun!

The leather balm was developed after some of the fans of the soap asked for a product — I did some research and have come up with a combination that I’ve been pretty happy with and folks have given great reviews, so it is a little bit research and a little bit trial and error!  Customer feedback is the MOST important thing I’ve used in development.

Q: What makes your soap unique?  How does it work?

Libby: I wish I could answer just *why* it works so well, but without divulging my super secret ingredient list, I don’t think I can.  It is a glycerin base, with conditioning oils added in and it seems to do a great job of cutting grime and nasty funky stuff without drying out the leather, or your hands.

Q: Where are your scents and product names derived from?

Libby: The scents for the three basic soaps are named after three event horses that are very close to my heart.  Buzz (Buzz’s Citrus Ginger) and Ben (Ben’s Rosemary Mint) were mine, and Fox (Fox’s Vanilla Lavender) belonged to my trainer, Kelley Nolan Norred.  Buzz and Fox are no longer with us, and Ben had to retire early due to having terrible feet, and complications from being insulin resistant — he rules my retirement pasture, and we still battle chronic founder with him.  I wanted to honor the memory of these special horses, and thought naming the soaps after them was a way to do that.  I also have had some of my special edition soaps named after other horses.  Alfie’s Vanilla Mint (belonging to Amanda Smith) and Phinney’s Sweet CinnaMint (belonging to Debbie Brady) were named after horses belonging to two friends who have been a huge help to me in starting my business. We have also donated the chance to have a scent named after the winner’s horse in the Canter Mid-Atlantic Fund Raising Auction and I was stunned at the amount of money it raised to help that great organization.  The scents have come from research on essential oil blends, and suggestions from fans!

Q: How did your business grow?  How much soap do you produce?

Libby: I have done no advertising so far — well, except for my first ad that will come out in the new magazine Equestrian Culture! It has been solely promoted through word of mouth, mostly through the HUGE review thread on the Chronicle of the Horse’s forums, and through the Facebook page.  I’ve teamed up with a group of other cottage industry equestrian manufacturers and done Facebook giveaways and that has been terrific!  I also have some sponsored riders in the eventing world, and they’ve been very helpful in assisting me in promoting the products.

I wish I could answer how much soap I’ve actually made since I launched the Etsy store in April, but my bookkeeping is pretty lousy (If I’d been able to do math, I would probably have become a tax lawyer and made a LOT more money!!) but way more than I expected to do this soon!  It is made in small batches in my kitchen, and everything is done by hand.  I’ve been really fortunate because my husband works from home, and has had the opportunity to get involved, and is doing a lot of the manufacturing now.  I’m afraid that without a partner, I’d be in trouble trying to keep up and still be able to focus on my “day job.” But, with his help, we’ve been able to make and ship enough soap and leather balm to meet the number of orders. 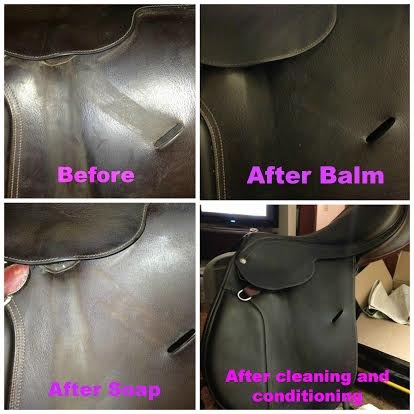 Q: What do others say about it?

“I was pleased with how well the balm absorbed into the leather without leaving a residue. I don’t own such a thing as a soft cloth, so I rubbed it in with my fingers while flexing the leather, as I would a balsam. My bridle (much better after 2 months of the soap, by the way- still inclined to be on the dry side, but no longer in a concerning way) absorbed a light coat within about 2 minutes and I put a second coat on. No stickiness, no dirt-attraction, no feeling like I had to wash my hands afterwards (I just rubbed my hands together and now my hands feel great!)

I have turned into a tack cleaner. This stuff is great! My 15-year-old paddock boots and 23-yr-old bridle look like new. (well, aside from the actual cracks in the boots) I have been cleaning my tack every DAY! Unheard of behavior for me. Plus, my good boots shined up well enough to ride in Lucinda’s clinic with no polishing! Thanks, Libby-great invention, thanks for sharing.

This stuff may change me… I’ve already cleaned my tack more in the past 2 weeks than I have total in the six months prior!  I can definitely see where this is a nice daily cleaner. It is easy to use and quick. I love that it is a conditioning soap, so I don’t have to use a wash and then also condition everything. One and done – love it! BUT, the bonus for me was that even though it is a “daily” soap, it REALLY did the trick to get off all of the old build up and gunk from my tack that hadn’t been cleaned in several months. I had a breastplate that was covered in 3+ month old dried sweat. With just a little extra force, all of that nasty came RIGHT off. And it wasn’t like I was REALLY scrubbing hard the way I have had to with some other soaps/cleaners – just that little extra bit of weight from my fingers and some extra suds took it off in a blink. The leather felt restored and soft the next day. Even better now that I’ve cleaned it after each ride I’ve used it for since.

Libby: I’d like to see the products continue to grow and spread to other areas.  A great deal of my customers are eventers (because, naturally, we are the coolest people out there!!  Even those of us who are hoping to one day return to competition at BN feel like we belong to the best community of equestrians that there is!) but I’d like to expand into other disciplines, and have begun reaching out to some western riders as well.  I would like to see it sold in more retail locations, but I also like the aspect of being in touch with my customers directly.  I’ve had so much fun developing products and have been working with a few new things that I’ve been handing out to folks to test for me.  I don’t see myself leaving my day job anytime soon, but I’m always open to opportunities! 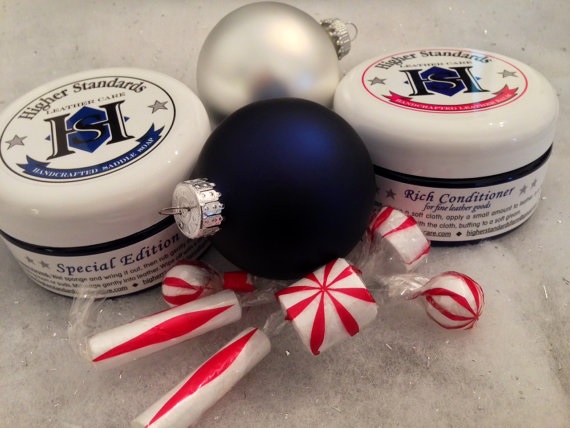 Many thanks to Libby for chatting with us, and her soap is surely to be appreciated in any equestrian’s Christmas stocking!  For a chance to win a FREE sample of Higher Standards soap in your choice of scent, please answer this question in the comments section: How many times did Upstage complete  Rolex CCI4*, and how many times in the top 15?  Winner will be chosen at random from the correct answers, please include your email address.