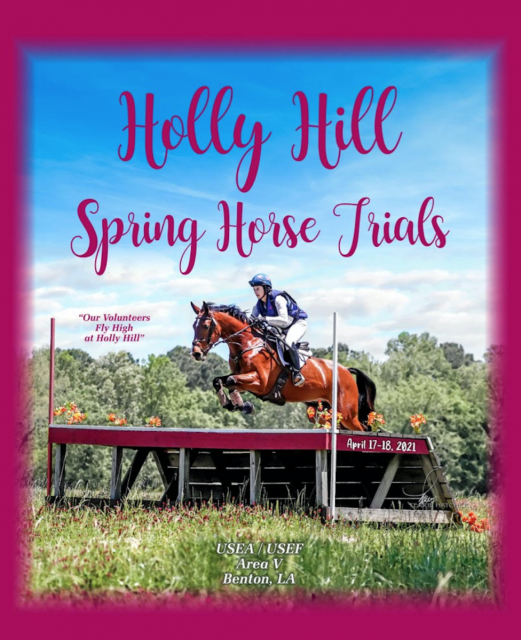 Twenty-eight middle and high school students competing in a new USEA-sanctioned Interscholastic Eventing League (IEL) were among 250 riders at the Holly Hill Horse Trials April 17 and 18.

Holly Hill Farm, in Benton, Louisiana, is one of three Area V venues offering IEL teams a chance to compete this year. Farm owners Tracy and Bobby Hewlett started the horse trials in 1996 and have embraced opportunities to share their love of eventing with riders of all ages. Holly Hill runs the horse trials twice a year, in April and October. The farm’s signature red clover was in full bloom for the 2021 spring trials, providing a colorful backdrop for horses galloping around the cross country course.

“It was a wet weekend with rain all day Friday and cloudy and cool on Saturday, but everyone chose to be a good sport,” Tracy said. “The footing held up well for the horses all day Saturday. Luckily the sun came out Sunday morning and it was a beautiful day for upper level cross country and lower level show jumping!”

Nicole Hackett gives the Holly Hill Horse Trials and the IEL challenge two thumbs up. Nicole is the chaperone for an IEL team based at Texas Rose Horse Park near Tyler, Texas. Her daughter, Luci, competed as an individual event rider at Holly Hill before joining the IEL team this year. Nicole competes in dressage.

“When we saw Holly Hill was on the IEL schedule, we picked a day to come school. It was a really nice introductory point for those that had never been there,” Nicole said. “The horse trial was fantastic. Eventing is my daughter’s social life, and to be able to go to an event and have her team support her was great. They were checking on each other, helping each braid, cheering each other on. It was so much fun to have that extra motivation and encouragement.”

The IEL team challenge wasn’t the only new feature at the horse trials this spring. Tracy and Bobby made other changes designed to improve the experience for horses and riders.

“We decided to move the cross country warm up area this year to make it bigger and get farther away from an entry gate and the dressage arenas.  That worked out well,” Tracy said.

“We recognized all his service to Area V and the USEA over the past 30 years,” Tracy said.