I recently took an interesting trip to Gulfport, MS to attend an event normally avoided by someone like myself.  I went to…cue shock and awe…a hunter/jumper show.  Now before you get your panties all in a wad, let it go and listen up. 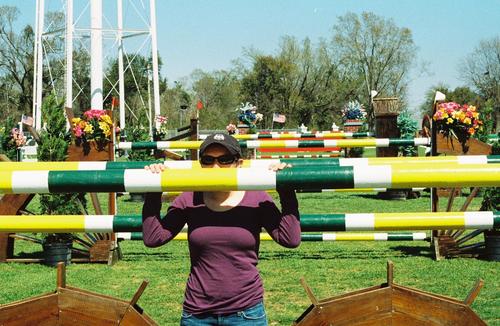 This is what we call a Sea of Rails.  And to give you a clue, I’m 5’3″ on a good day.  Here I am wearing big ol’ boots with a 2 inch heel.
The most experience I have had up until now with hunters is when they had a hunter show at Poplar Place the summer I was a working student there.  By the end of the two weeks, we were so fed up with their sparkly belts and tent decorations we were practically chasing them out of the driveway.  They actually complained about Poplar’s amazing arena footing (I was there when the stuff was installed…you can’t even imagine the effort and expense it required).  So naturally, I entered this experience with the same pre-existing opinion about hunters that most Eventers hold.
Which one doesn’t belong? 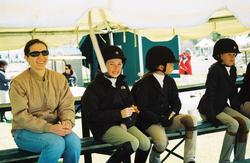 Then, when my companion for the weekend advised me not to tell anyone that I am an Eventer, I was just waiting for someone to give me the opportunity.
It probably doesn’t help that every hunter converted to Eventing that I have encountered generally comment something along the lines of, “Eventers are so nice and helpful!  Not at all like at hunter shows.”  We are awesome, we know.
So I approached this outing like many people approach a clinic with a new trainer: take away what you want, and discard the rest.  This was an opportunity to learn about riding horses (and watch a Grand Prix), so I was inclined to make the most of it regardless.
Photos below posted with permission by Leslie Threlkeld 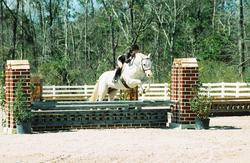 One of the first things I noticed (on the hunter and the jumper sides of the fairgrounds) was all the dogs.  Tons of dogs.  I think most of us pretty well recognize that dogs are a common presence throughout every equestrian discipline.  Why?  Well, it can be expensive to board them every time you leave for an event.  Maybe it’s because the dogs appear to enjoy it so much…their excitement is contagious.  Maybe it’s because the dogs keep us calm under pressure…maybe we just like to show them off.  Corgis were definitely a popular breed at this particular show…as well as various breeds of hunting dogs….ironic, no?
Here is another characteristic of a hunter/jumper competition comparative to events.  Dirtbikes and scooters buzz about the show grounds at top speed with little regard to the heavy, shod hooves prepared to take a whack at your head should you steer too close.  As one of the many people with a horse who isn’t so comfortable with a motorized vehicle whizzing by his face without warning, let me jump on a soapbox for just one second….Just because your horse is not skittish or hard to control around motorbikes, dirtbikes, and scooters, does not under any circumstances and by any logic mean that every other horse on the grounds will be OK with them too.  If you must take a motorized vehicle instead of hoofing it on your own two legs, please exercise caution around the horses.  And don’t look at me like I’ve insulted or wronged you when my horse’s back foot nearly grazes your shoulder after you fly up behind him like you were riding a Motocross course.  Sure, he might get used to them in time, but I don’t own a scooter or motorized bike, and I’m not going to purchase one just for the sake of getting him used to them so you can buzz around a horse show at 60 mph.
I’m stepping off my box now. 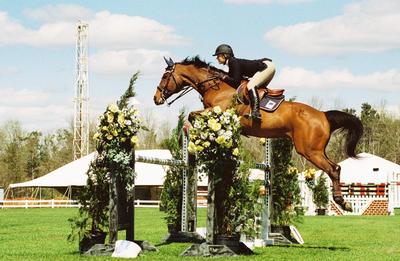 Now and again my show companion pulled me away from the jumper ring to watch what he was most interested in observing, the hunter rings.  I was OK with that just so long as we can stop by the pony rings and let me “Awwww” at them for a while. 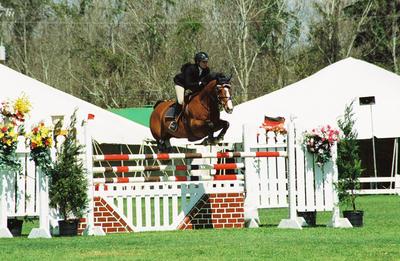 Later, we tried our hand at pinning a flat class to see how close we come to the judge’s picks.  We were waaay off.  There were several big moving, flashy horses that weren’t so steady and obedient in comparison to the less flashy but steady eddie horses that weren’t such natural lookers.  The flashy, disobedient horses pinned better with this judge.  “What a silly, subjective way of doing things,” I was thinking.  Then I realized the case isn’t much different from dressage.  While there are guidelines and suggestions for the dressage judge to refer to, it ultimately comes down to what they like to see in a horse and rider during a test.  There have been many instances where an inexperienced, slightly off-balanced but super flashy and nice moving horse scored better than the consistent, obedient tests delivered by a horse with less of the “wow” factor.  If you hold on to your tests (like my mom and I), it is possible to get to know a particular judge and what they like to see in a test and ride it accordingly.  But that’s a lot of effort for little reward I think.  Just go out there and do your best.  What matters is if you are pleased with your ride and your horse’s effort, regardless of your discipline.
Look!  A “natural obstacle” they had to trot over. 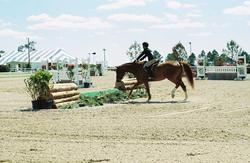 Eventers like us, we think we are pretty awesome….and we are….for lots of reasons.  Not only do we have a strong, supportive community, making the unpredictable horse experience all the better, but we also have a reputation for being good horsemen.  We must never close our eyes and ears to the opportunity to learn.  Scribe at a dressage show, pick up poles at a jumper show.  If you go watch some hunters, take note of their good positions in the saddle.  Not to mention, you will hardly ever see a rail go down.  If only we could figure out the secret to clear rounds, we’d be unstoppable!