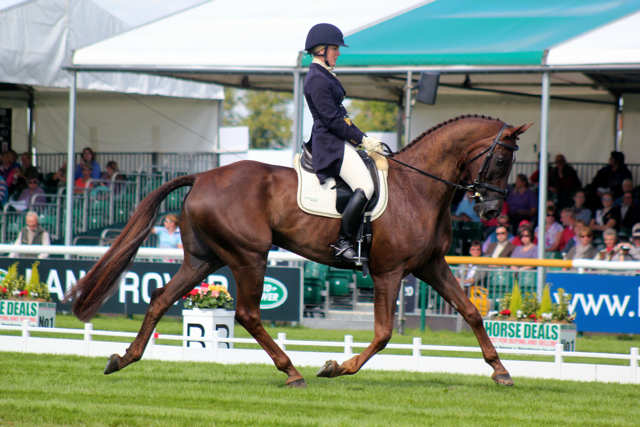 Evention’s #mindyourmelon campaign keeps chugging along, and global awareness of helmet safety has made great strides. In that spirit, Horse & Hound published an article today asking, “Is It the End of the Top Hat in Dressage?”

Since Courtney King-Dye’s accident in 2010, many riders have changed their stance on wearing helmets in both pure dressage and eventing. Silva Martin has made it very clear she wears a helmet at all times when mounted in large part because of Courtney’s accident, a decision that likely saved her life during her accident this past March.

Allison Springer made waves at Rolex in 2010 when she was the only rider to wear a helmet in dressage. Since then, we’ve slowly seen riders follow suit, not just stateside, but in major competitions in Europe as well.

Charlotte Dujardin won an individual Olympic gold medal in 2012 wearing her helmet, proof that judges will score an excellent test fairly no matter what headgear the rider chooses. The progress has been slow — traditionalists cling to their top hats in competition for the sake of the look, but the tide is changing.

Mary King wore her helmet at Badminton this year, and told Horse & Hound: “To be honest it was Charlotte Dujardin at the Olympics wearing it at such a high profile event [which made me decide]. I don’t think there are going to be many years left of being able to wear a top hat, and I’m setting a good example for the younger riders.”

While presumably it will take enforcement of an FEI rule to eliminate the top hat entirely, it is excellent to see so many riders voluntarily fasten their helmet instead. Before you know it, kids will look back on photos asking, “Why did they wear those funny hats on their heads?”

Eventing Nation has long been a proponent of wearing a helmet “every ride, every time.” We hope that with increased awareness, more riders will adopt this philosophy in the saddle.