Is anyone else totally in love with Valegro? With a barn name like Blueberry, you just have to be a fan. Not to mention the fact that he’s pretty much broken every record in the sport of dressage. And as you’ll see from watching this video of Charlotte Dujardin riding the horse at age 6, they were always destined for greatness. This post originally appeared on Horse Nation. 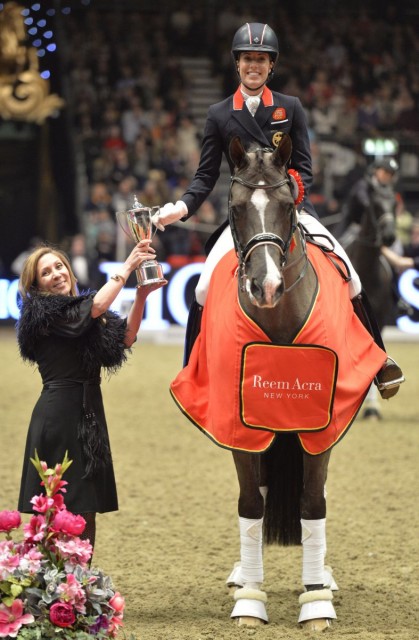 Charlotte Dujardin and Valegro at Olympia.
Photo by Kit Houghton/FEI, used with permission from the FEI Photo Database.

Valegro, the Olympic gold-winning Dutch Warmblood, was recently named Horse of the Year for the breed…and understandably so. With his rider Charlotte Dujardin, he has now broken every Grand Prix dressage world record, taken home both the team and individual Olympic gold medals in dressage during  the Summer 2012 Olympics (on another record score) and has remained unbeaten since the CDI Kapellen in January 2012.

You know … no big deal if you’ve been training under Carl Hester.

Before he was bringing home dressage scores above 90% (!), Valegro (known as Blueberry in the barn) was just another young prospect in Carl Hester’s training program. Here’s a video from 2008 showing him at age 6, before anyone realized what he and Dujardin would go on to achieve.

Pretty amazing  movement for a six-year-old! And it just got better as Dujardin went on to develop his ability for collection, and culminated with their record-breaking 93.975% freestyle seven years later:

It just goes to show that slow and steady progress really does pay off!