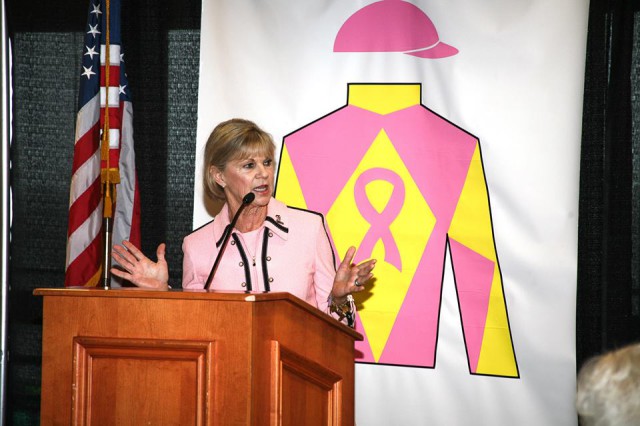 Equestrian Events Inc., producer of the Rolex Kentucky Three-Day Event, has named Horses and Hope the official charity of the 2015 competition. All proceeds will go towards a new mobile screening van equipped to screen for seven types of cancer in both men and women — cervical, colon, lung, breast, prostate, skin and head/neck.

“We are so grateful to be named the official charity of the 2015 Rolex Kentucky Three-Day Event. Horses and Hope is focused on increasing breast cancer awareness and educating Kentuckians and at-risk populations about the importance of prevention, screening and early detection,” Kentucky First Lady Jane Beshear said in a statement.

“Our partnership with Rolex Kentucky will help us bring this important message to the thousands of equestrian enthusiasts who will be attending this world-class event.”

Horses and Hope was founded in 2008 by the Office of the First Lady and the Kentucky Cancer Program. Since then it has reached nearly 1 million racetrack and horse show attendees and screened more than 700 workers, detecting breast cancer in three individuals who have received treatment as a result.

In January, Horses and Hope announced a partnership with KentuckyOne Health, the James Graham Brown Cancer Center at the University of Louisville and the Kentucky Cancer Program, to raise $1 million for a new mobile cancer screening van. The partners hope the new van will extend the reach of Horses and Hope beyond the equine industry.

There will be a number of opportunities to participate in fundraising activities during Rolex, including the inaugural RK-5K Twilight Run around the Kentucky Horse Park on Friday, April 24, 2015 at 6:30 p.m. Not a runner? No problem. The race also features a 1 mile fun run/walk, which the EN crew is rumored to be attending. Click here to sign up.

EEI has a long history of charitable donations and decided last year to begin naming an annual official charity “so we could make an even more meaningful impact and bring much needed awareness to these organizations.”

Stewart Perry, president of the EEI Board of Directors said, “Horses and Hope is a perfect choice for the Rolex Kentucky Three-Day Event considering the Governor and First Lady’s deep involvement with the Kentucky Horse Park and the important work Horses and Hope is doing.”

This year EEI is donating a total of $32,000 to eight local and equine charities, which is a $10,000 increase over last year’s contributions. In addition to Hope for Horses, EEI’s charitable donations will go to Kentucky Children’s Hospital, Kentucky State Police Fallen Trooper Project, Midway College, EEI Central Kentucky Riding for Hope, the University of Kentucky Equestrian Team, Georgetown College and the Equine Land Conservation Resource.