Kate Chadderton was kind enough to send in the story of how she met Collection Pass, the now 12-year-old OTTB gelding she’ll be piloting around Rolex next week in the horse’s first four-star appearance. Retiring after six starts, “Cole” [Collection Agent X Winged Passage, by Assault Landing] is just one more excellent example of what Thoroughbreds can accomplish in second careers. Be sure to cheer them on at Rolex! 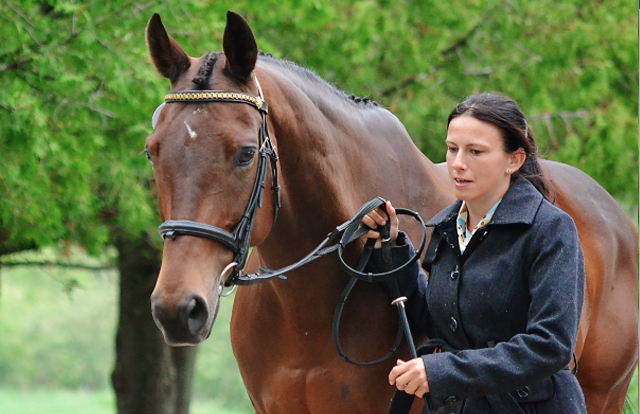 Rolex is fast approaching, and I thought I would share the story of how I came across my 2014 entry, Collection Pass. It was actually the brilliant idea of Robert Taylor of TaylorMade farm in Damascus, Md., that I go and see a horse down the road. I was fairly new to the U.S., and Robert was fairly unclear on the details of the horse: He was either a good prospect, had done some eventing, or some fox hunting or something. He had actually mentioned him to me several months earlier, but at that point the owner was not ready to part with him.

The horse sounded intriguing enough, so I waited for Robert to give me the OK to contact the owners. That call came late one Halloween afternoon; as I had plans for the evening, I almost did not go to see the horse. As with any professional rider, the lure of seeing a new horse always wins out. Robert had told me that I would have to take my own tack, as his owners (Rege Dvorsky and Jeanne Leone) were not riders and would not have anything I could use. So it was with very low expectations (and several apologetic messages to the social side of my evening) that I arrived to see this horse that “may or may not have evented.”

Happily, the horse I found was a nice type and seemed very well taken care of, so I chucked my saddle and bridle on and looked for a place to try him. When I asked Rege where the best place to ride was, he indicated toward some trails. It seemed like a good idea, so I pointed Cole’s nose down one and cantered. He seemed to do that alright, so I turned around and cantered back. He seemed to do that alright too! So we raided Rege’s garage for something to jump, and all I could find were pet carriers . So I set them up on the trail. Without batting an eyelid Cole jumped them both ways. Good nature, good type, good canter, I was sold!

Rege kindly agreed to my suggestion of a week’s trial to see how he was in an actual ring, which would also give me a chance to look up his record and get some history on him. During this week, I came to know Rege and Jeanne, and they made the decision to take him off the market and remain as the owners. Also during that week, I learned a lot more about Cole’s history. He had in fact evented. He was sourced by Kelley Williams of A Bit Better Farm in Maryland, who initially trained and evented him. She’s since told me he was very nearly sold as a hunter in Canada, but that fell through — thank goodness! Kelley then sold him to Rege for local event rider and owner of A Deck Above Farm, Kristin Parris.

As a race horse, he was not particularly successful, being given the sack after only six starts. When looking closely at his record it’s easy to see why. In five of the six starts, he was last. In his sixth start, he was second last, only beating home a horse that broke down halfway around.

Cole is your quintessential American Thoroughbred in that he’s very athletic, surefooted and, most importantly, comes to work every day giving his 110 percent effort. Where he differs from other Thoroughbreds, though, is his laid-back nature. On Sunday, he can run around an Advanced, and on Monday he can go trail riding with a 10-year-old kid (which he has done!). He doesn’t understand or think that he is particularly good; he is certainly not one of those bulletproof horses. For me this has taken some getting used to, as I have always ridden very bold and gregarious horses; Cole is certainly not gregarious! In the time I have known him now, I learnt that while he is honest and brave, I do have to hold his hand, and he generally will take the lead from me.

If he knew that he was an Advanced horse about to take on a four-star, he would probably go to the corner of his stall and cry, but I think the same would happen if we told him he was at training level and going to a training three-day! I strongly believe he thinks he’s still at Novice level, so we keep telling him he’s just going to a Novice championship. “Don’t worry, boy. The jumps won’t be any bigger than what your used to! There will just be more people watching!” If he were a guy, he would be a valuable player on the football team, but not the star, and he would always be up for a drink at the pub!

Now with just over a week to go, we’re taking it day by day with his training and fitness. Wish us luck, and give him a cheer as we go around! Just not too loud! This weekend, as he missed his run at The Fork, I ran him around the Intermediate at Plantation Field. Now to keep us both sound for another week and a half!