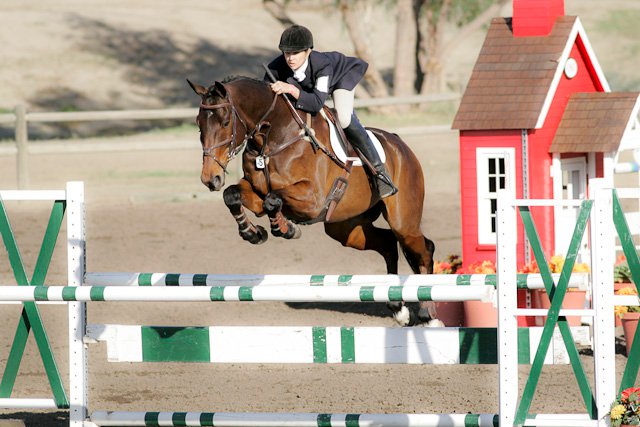 I will never forget the day I met him. I was 13 years old and, at 17.2 hands, he was the biggest horse I had ever handled. He was 6 years old, and that day would mark the start of a relationship that would change my life and leave me wondering how life ever existed before him.

Together, “Fric” or “Gooby” (professionally known as Fric Frac Berence) and I would quickly develop a great partnership. As two youngsters, we competed together in just one Training event before moving up to Prelim. That same year (2001), we did our first CCI* at NAJYRC, a full phase back in those days, and brought home the silver medal for Area VI.

We continued our success together and when time came made the move to Intermediate with the same success we had seen at Preliminary. Mid-season our first year at Intermediate, I went out to the pasture to get Fric and noticed he had a very strange white squiggly line through his eye, and he was squinting a great deal.

I immediately called the vet and a few days later we were in the trailer headed to see an optometrist a few hours away. After examining Fric, I was told there was good news and bad news. The good news was that his left eye was clinically normal, meaning that his situation was not from genetics, and he would most likely always have vision in his left eye.

The bad news however, was that his right eye had sustained trauma, most likely from hitting it in the field or having a bug fly into his eye just right, slicing his cornea, which would eventually cause a cataract to form. His right eye would in time be blind, more likely than not. I was told that day that he had 70 percent vision in his right eye and that how quickly it would deteriorate was hard to say. It could range from a few months to a few years.

Three months later, Fric had lost all vision on the right side. I was told that jumping Fric was something they could not advise and that with limited vision, the danger of competing was increased greatly. Maybe it was because I was a clueless kid, but for some reason I never gave up hope that he would be able to continue competing.

By this time in our career together, Fric and I had built a special partnership, and with the support of my then trainer Yves Sauvignon, we tried jumping. During those three months when he was losing vision, it was clear that Fric was struggling to see a distance. However he was so honest, he would try to jump anyway — sometimes from very far out, therefore making it very dangerous.

We waited and decided to give him time and try again. Once his vision was completely gone in that eye, we jumped. Fric did not miss a beat! The blurriness in one eye and clarity in the other made things hard during the time the vision was deteriorating. 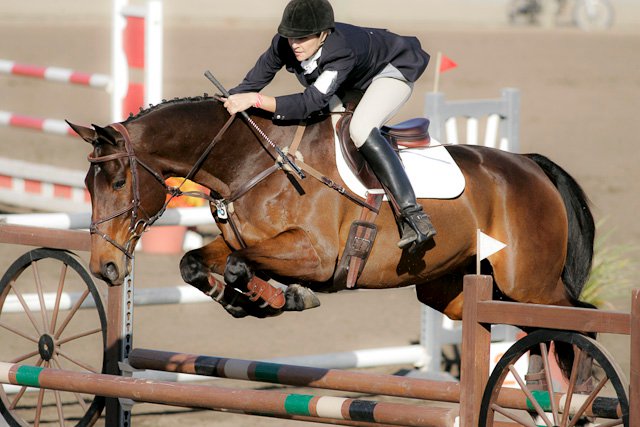 We learned to make some minor adjustments, doing things like turning his head so he could see if we were coming around a turn, or coming into combinations very still with my hands and not moving so he could turn to see the whole line, and it quickly became like second nature for us.

His biggest struggles once he lost full vision were actually in the barn. For example, if you called his name on the side he could not see you on, he would turn into his door or hit his head accidentally. Over time without even knowing it, I learned to protect him, and it became something I just did without even thinking.

We began competing again after a few months off once the vision was gone completely from Fric’s right eye. His eye was white and looked noticeably different, also requiring special medication in it twice a day. He required a steroid drop in his eye to keep it from becoming too painful due to the pressure. This had to be approved for use at every single FEI competition he did, which meant the FEI vet had to present the situation to them.

We were fortunate to have some unbelievable people fight on our behalf, and as a result I have some wonderful friends I never would have come to know otherwise.

We moved up to the Advanced level and things seemed to be going great. Then, in our second season of Advanced together, Fric sustained a horrific tendon injury. He was and is to this day the most stoic horse I have ever met, so knowing he is injured is very hard at times.

He came off cross country perfectly at this particular show and went on to jump a double clean show jumping, winning the event. He was sound when I put him away after cross country and sound again the morning of show jumping. However, when I got him home, although he was sound, his left front tendon did not seem quite right to me and had a bit of heat.

After getting him scanned as a precaution, I found out he had torn the left front tendon. We decided to splice the tendon and send him up to one of the major vet hospitals in my area for the surgery for the best chance of recovery. Right before we took him, my mom was looking at his scan with our vet.

The vet showed her his right front so she could see what a good one looked like, and to our shock that one, with no outside signs from stoic Fric, was also torn! He ended up having the procedure done on both front legs and would need a long recovery and rehab.

I rehabbed Fric back and competed him at Advanced at Rebecca Farm. He won the event and felt better than ever! Then, to my heartbreak a few weeks later, the leg just didn’t look quite right and somewhere deep down I thought something might be wrong.

Again, in Fric fashion, he showed very few signs of a problem and of course trotted out completely sound. Over the years when I would have a vet out to scan him, I am sure they thought I was completely nuts — that is until they saw his scans and each time I was right. He had reinjured his left tendon, not as extremely as before, but he would again require rehab.

After rehabbing for several months, his scans were not improving how we had hoped and my vet told me the bad news that he felt he would need many more months of rehab before he should jump. Rehab was starting to take a toll on my friend Fric, and so I made a decision that I knew could end in retiring him, but at the same time I knew would make his quality of life what he deserved.

Rather than keep him in a stall, locked up with his spirit dwindling, I elected to turn him out in my pasture at home for six months. I knew that he could make the leg worse and was advised not to, but my love for Fric has always made me want the best for him as a horse first and foremost.

He had become miserable in his stall all day every day. When I turned him out, he looked so refreshed. My vet came to look at him two months later and told me that the leg in fact looked much better and I could put him back to work, although he would have a very hard time staying sound with the wear and tear of the upper levels.

I decided to wait and continue letting the leg get strong rather than rushing him. At the six month mark, we scanned Fric and he looked great. I brought him back to work and slowly began the rehab process, knowing only he could determine how long he would be able to sustain himself competing. 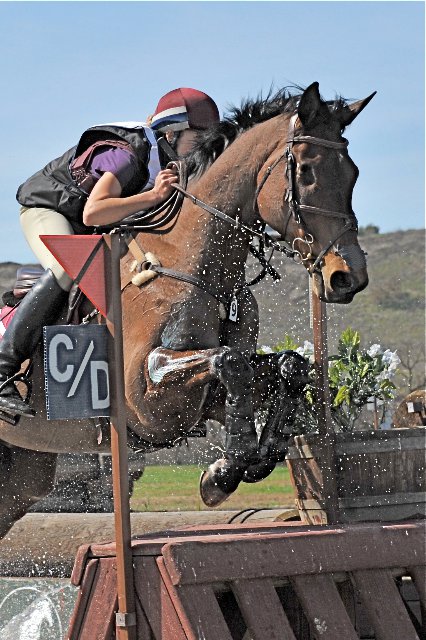 After a few months, Fric was jumping again, and I decided that I would compete him and see how things went. Worse case, if he got hurt again, he could have a wonderful life in my pasture. The thing about Fric was he was never very well behaved if the jumps were small. In fact he was a bit rude and horrible if things were under Intermediate height.

I competed Fric at the Advanced level for five more years after that before a completely separate injury two weeks before Rolex in 2011, which was set to be our last competition, would send him to my field a few weeks early.

Fric’s eye was removed prior to his final season competing because the pressure in it had become too high, and despite it all, the amount of heart he showed and his love of cross country was something I have never seen or felt with any other horse.

Fric never had a cross-country jump penalty in any FEI competition he did. Together we did the three-star at Bromont, Rebecca Farm, and several others, including the inaugural Galway Downs CCI3*.

At every FEI event I competed him in, regardless of how tough the terrain or course, he always looked like a million bucks come Sunday morning jogs. Even those times I would later find out he had hurt himself, he never showed it and always took care of me in every situation.

Nothing seemed to be too much for him to overcome, and he certainly had his share of odd things happen. He even had a growth somehow form in his thyroid gland that grew to be the size of a grapefruit, so he now has just one thyroid gland, of all things. 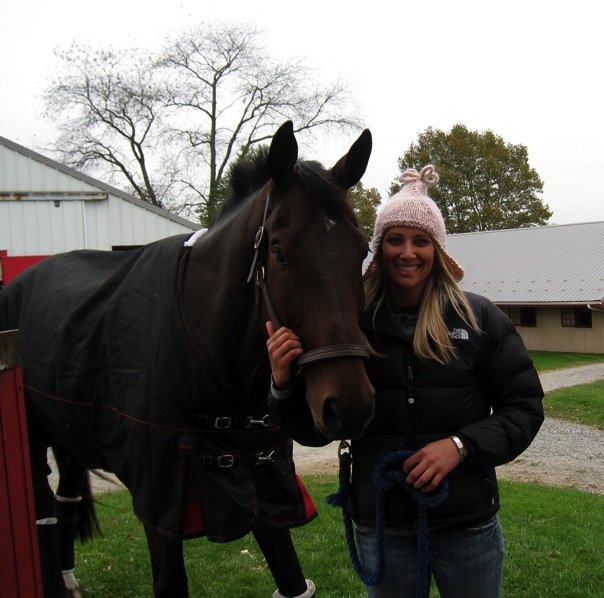 Many people have said that Fric’s love for me is very special and rare and that he kept going because of our bond. I cannot explain him, nor can I say why he is so stoic, but he is a remarkable example of overcoming the unthinkable time and time again.

Fric taught me to appreciate the small moments. When someone tells you that your horse should never jump again, or when you know that they could be permanently injured at any moment, you learn to appreciate every single ride, and every single day you sit on them.

Fric and I have more wonderful moments together than I can count, and every day I still get to enjoy his company as I go to my pasture to feed him at the age of 22. We even go on the occasional beach ride together still, and he insists on walking straight into the water to play without hesitation — his very favorite thing.

I just wish they made horses today half as stoic as he is, but at the same time I know that is part of what makes him so special.