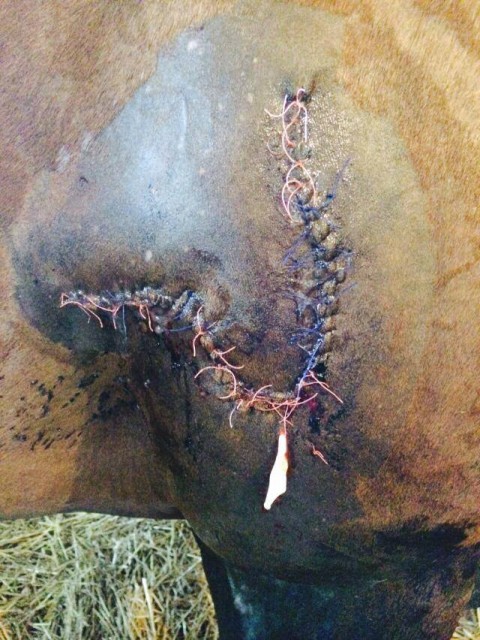 That's probably going to put a damper on our summer show plans.

My OTTB, Mia, has impeccable timing. Just when John told me he wanted me to start writing for Bloggers Row, she managed to sustain a “pretty substantial” — I’ll explain that later — injury yesterday while in overnight turnout. And since I know we horse people have a strange obsession with injury and x-ray photos of both the human and equine variety, you get a front-row seat.

For a little background, Mia is a 2004 Illinois-bred Thoroughbred mare who raced 42 times under the Jockey Club name Miss She Gone. She ran in the money 20 times and won just under $90,000, retiring at the end of her 7-year-old season at Penn National. A young rider adopted her through CANTER PA in 2012, but ultimately decided she wanted to pursue barrel racing, so Mia went back to CANTER, and I adopted her in March 2013 as an eventing prospect.

Remember Kate’s philosophy on the tortoise method of training? I ascribe to that too, and I just about popped all the buttons off my coat when Mia won her first Intro Level dressage test on 73.1% last summer — I was bursting with pride. She spent the rest of that year going cross-country schooling, discovering that water would not swallow her up and learning to canter without looking like she was going to fall over. 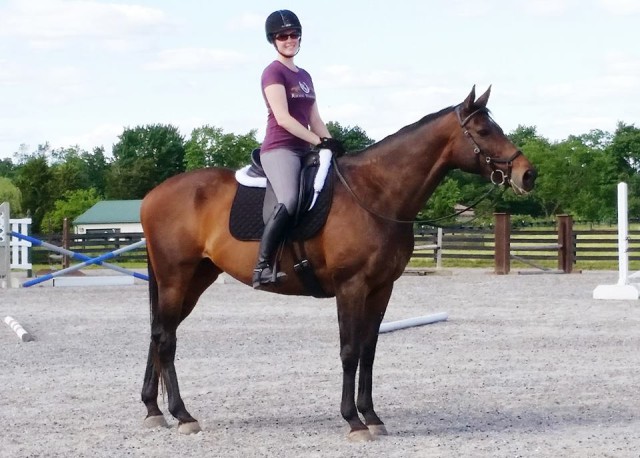 A couple weeks ago. Note the absence of a gaping hole on her right shoulder.

Then I broke my foot and ankle in January falling down the front steps of a friend’s house — I really should come up with a better story — and Mia fought a nasty abscess through the spring, battling lameness on and off for two months. So between our various ailments, she only just came into consistent work in May, when she did her first clinic with Maj. Jeremy Beale, who we’re lucky enough to have teach regularly at Stonewood Farms in Dover, Pa., where I board my horses.

I say all this to set the scene. We were about to make our glorious return to competing — maybe even canter in a dressage test. This was big, ya’ll. We had a lovely hack Wednesday night, and I puttered around in the barn with her until about 7:30 p.m. before turning her out with her little herd of five other mares. All was right in the world.

I got out of the shower at about 7 a.m. the next morning to see a missed call and voicemail from Liza Sigel, who has been handling morning feeding and chores while our fearless leader Holly Sands is in New York for a family reunion. (Murphy’s Law dictates that disaster always strikes while your barn manager is out of town.)

I knew right away it was about Mia. My other mare, Piper, a retired 25-year-old Thoroughbred lawn ornament, never hurts herself. She’ll probably outlive me. When I asked Liza how bad it was, she very calmly said Mia had a “pretty substantial” wound on her right shoulder. Liza is a vet tech at our local small animal hospital. If she used the words “pretty substantial,” I knew it was bad. 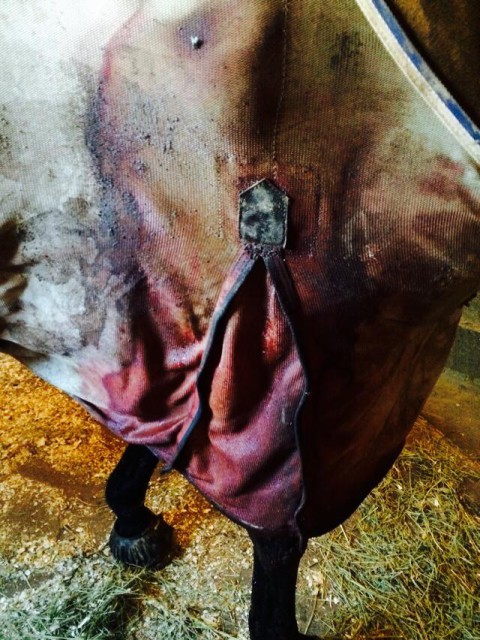 Not a single rip or fray on her fly sheet.

Liza had already called the vet, and Dr. Wade Wisner of Green Glen Equine Hospital was en route. I arrived a few minutes before him, and I knew Liza wasn’t exaggerating as soon as I peeked into Mia’s stall. The entire right front of her fly sheet was soaked with blood, and you could tell there was a large lump under the sheet above her elbow. Yep — it was bad.

Dr. Wisner is well-known locally for his prowess with a suture needle, and in that moment I was very thankful that he was the vet doing the honors. Though he’s stitched many an impressive injury during his career, he took one look at her and admitted it was the worst wound he’s seen in a very long time.

Right off the bat, he was concerned about whether he could successfully stitch it. Based on how fresh the wound looked, we think she injured herself sometime in the wee hours of the morning; but even so, the flap of skin that needed to be sutured had already lost a lot of elasticity. And wounds in areas like this don’t tend to hold sutures well.

But he went for it — first cleaning, then trimming, then stitching her back together piece by piece. As you can see in the photos below, he first connected the flap to the bottom of the wound, then stitched the right side, then the left, and finally the remaining “smile” of a wound that was left, as he called it. 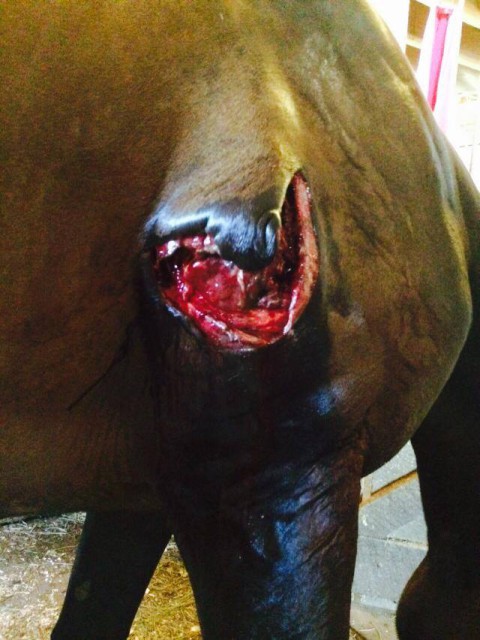 Our first look at the wound.

I lost count of the number of new suture thread packs Dr. Wisner opened. It was the first time I’ve ever seen #2 suture thread used on a wound — though it really shouldn’t be called thread by definition; it’s so thick that it’s practically yarn. There was more tension toward the back of the wound directly above her elbow, so he used the #2 suture thread there to try to get the stitches to hold.

That was the entire goal during the three-hour stitching process — get the sutures to hold. As Dr. Wisner finally finished and surveyed his handiwork — I told him he missed his calling as a seamstress — we cautiously led Mia back to her stall, thus achieving our first little victory. Every stitch remained intact.

And that’s going to be my philosophy during this journey — I’ll be looking for the little victories. Her prognosis is good, though she has a long road ahead. Because she damaged the muscle so severely — Dr. Wisner used the word “pulverized” — she is looking at a month of total stall rest, followed by another month of stall rest with hand grazing, then a month of small paddock turnout. Best case scenario, she can start walking under saddle in October. 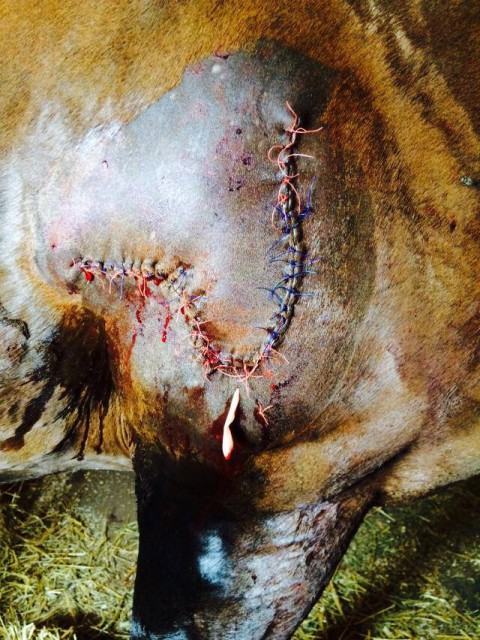 And I know what you’re all thinking — how did this happen? All we’ve found in scouring her field is a lost fly mask. No loose boards or nails that could have caused this. No sharp rocks or branches. The top inside board of the entire field is hot wired, which keeps the horses off the fence line. We also didn’t find any blood, hair or sign of a struggle. Her fly sheet was not ripped or even frayed.

She is in a herd with five other quiet mares, and all of them were barefoot at the time of the injury but one. The one with shoes only has fronts, and there was no blood to be found. There is also no history of aggressiveness in her herd. All the other mares came in without a scratch on them. Her left hind leg was also swollen with three superficial cuts, which only adds to the mystery.

My very concerned albeit non-horsey husband is convinced a coyote attacked her, though, based on the severity of the injury, a Facebook friend’s suggestion of Wolverine as the culprit seems more likely. We will continue searching, but our conclusion so far is you can do everything right to try to keep your horses safe, but injuries will still happen — that’s just how it goes.

So I’ll be taking this one day at a time, and I invite you to come on the journey with me. I’ll be taking pictures of her progress every day and posting a weekly update to Bloggers Row. Please send positive vibes her way and share your own stories of horses you know that have faced similar injuries. We’re holding out hope for a full and total recovery. #teammia 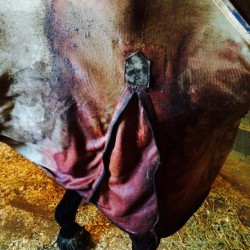 Not a single rip or fray on her fly sheet. 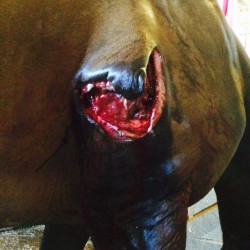 Our first look at the wound. 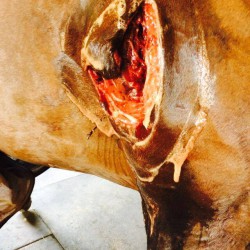 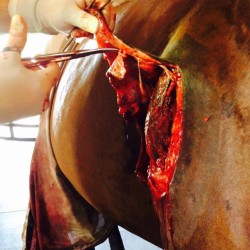 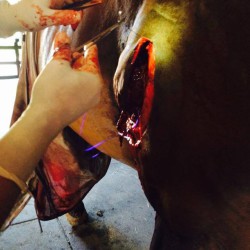 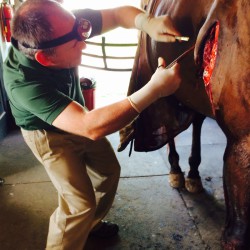 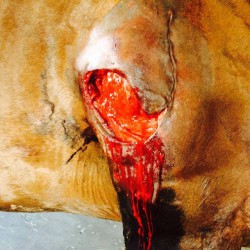 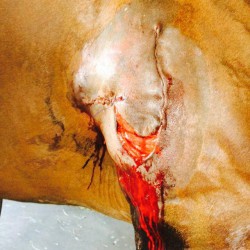 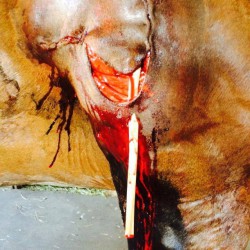 The drain going in. 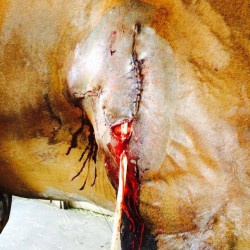 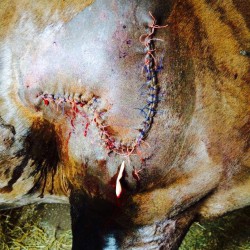 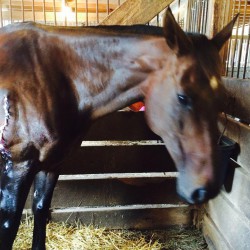 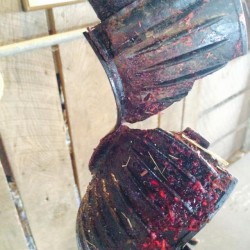 The aftermath. RIP, bell boot. You served us well. 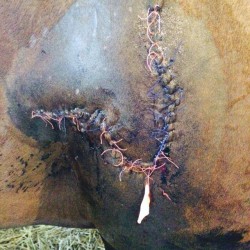 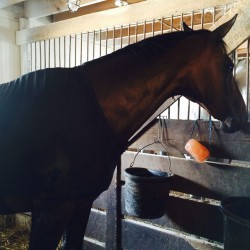 Dr. Wisner recommended a loose shoulder guard to keep the flies away and Mia’s nibbly mouth off the stitches.