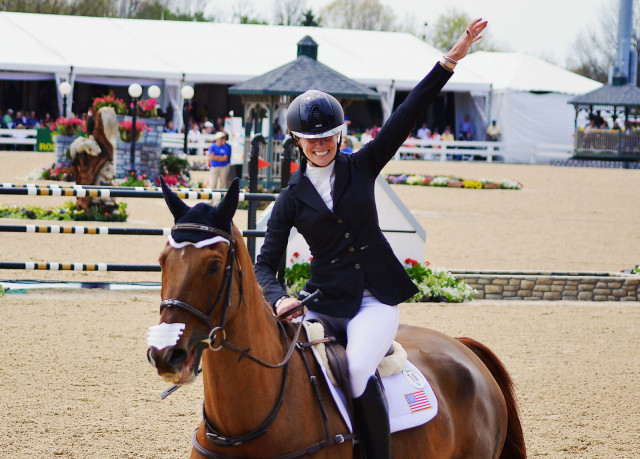 You always wonder exactly what you’re going to get with a new group of selectors. With all the emphasis that’s been placed on getting U.S. dressage scores as close to the 45 mark as possible in championship scenarios, I think we all wondered if the selectors would only choose horses with the ability to consistently hit those low numbers in the little white box.

Instead, we got a powerhouse cross-country team that has received enormously positive feedback from the U.S. eventing community. In the past, selectors have favored horses with the ability to ideally hit a home run in all three phases with the podium in mind. This year, we have an incredibly consistent group that can deliver when it counts. This is a bold, smart team.

Of course, this squad is not without its surprises, and what fun would it be without a few surprises? When I spoke with Boyd Martin and Phillip Dutton earlier in the week, they both thought Trading Aces would most likely be named as a reserve horse for one or both of them after the horse’s syndicate owners got on board for that to happen.

But the selectors took that idea and ran with it, skipping the reserve scenario altogether and naming Oscar as Phillip’s ride on the squad. Again, it’s a bold move, and one that the selectors obviously put a lot of thought into, as Phillip said last night.

Remember back to Rolex and Boekelo last year, when Oscar ran out of gas just a few fences from home, only to head to the Netherlands later that year to nurse a very tired horse around the course. Everyone questioned at that point if Oscar had what it took to be a four-star horse.

Fast forward to the spring, and with the horse’s sweating issues sorted and a new fitness plan in place, he won Red Hills CIC3* with Boyd — and his first car — then his Advanced division at The Fork with Phillip, then hit bang on the optimum time at Rolex with Phillip to win yet another car. Oscar had one rail down the next day to finish eighth in his first four-star completion.

Those results are hard to ignore, and if Phillip can produce that with just a handful of rides on the horse, think about how good they could be if given the whole summer to prepare. Boyd said yesterday that Oscar will likely move in to Phillip’s barn to train full-time in his program, which Phillip mused would probably be a good idea so he can, you know, actually ride the horse before the big show this time around.

Kim Severson and Fernhill Fearless serve as another surprising yet very smart addition to the team. An individual silver and team bronze Olympic medalist and WEG team gold medalist, Kim is one of our most experienced and decorated riders still competing at this level. Her cross-country record at the CCI4*, WEG and Olympic level is just damn impressive.

Kim has barely competed Sparky for a year, yet since then she’s been on a warpath to prove that this would be her next championship mount. And from Fair Hill to The Fork to Rolex, she’s shown she means business. So the horse might not be able to hit the 40s in dressage. Who cares? The selectors can obviously think more outside the box than that, and so can we. And with Kim’s prowess in dressage, we wouldn’t be surprised if Sparky does nail a low score in France.

Again, it’s a bold, smart move that shows this group of selectors isn’t afraid to buck the trend to get the best group of horses and riders to Normandy. We see that again with Lynn Symansky and Donner, who have had just about the worst bout of bad luck you could imagine this spring.

After an unbelievably dominant 2013 that saw Donner named Eventing Nation Horse of the Year, Lynn was hit with a one-two punch, with some fill in Donner’s ankle forcing them to forgo Rolex and go through Jersey Fresh and Bromont to get selected. But disaster struck at Jersey when she fell from Donner for the very first time, badly injuring her leg in the process.

But the selectors once again have shown that they’re willing to look at the big picture. In building the very best team possible for Normandy, you have to send the horse that skipped around a Pierre Michelet course in the fastest time of the day at Pau last fall. Did Donner really have anything left to prove after that?

Another pair with nothing left to prove, Sinead Halpin and Manoir de Carneville are finally getting what they deserve with a spot on a championship team. Much has been said about her absence on the London Olympic team, and throughout the roller coaster ride since, Sinead has remained totally optimistic and upbeat. She believed in her horse when no one else did, and it’s paid off in spades.

Again, this is a cross-country dominant pair that can nail the other phases too, and I told Sinead last night that there would have been rioting in the streets had she been left off a team again. But Sinead and Tate did everything right this spring to prove they are ready to fly the American flag on international soil. The French Princess is going home.

In looking at potential team scenarios, it was nearly impossible to imagine one without Buck Davidson and Ballynoecastle RM. A longtime partnership at the highest levels of U.S. eventing, Buck and Reggie competed at WEG in 2010 only to come up short on cross-country day. But Buck said yesterday that’s in the past, and he is looking ahead to the future with the goal in mind of delivering their personal best performance on the international stage — for himself and country.

This is one of those partnerships that epitomizes why we do this crazy sport. You don’t have to spend much time around Buck and Reggie to see that this is a special rider with an equally special horse — a combination that will dig deep on cross-country day and never stop fighting until the last fence. That’s the grit and determination we need to get Team USA back on the podium.

And no one showed more grit and determination this season than Boyd Martin. Watching him go from hobbling around on crutches at The Fork to delivering a double clear trip at Luhmühlen nine weeks later has been nothing short of extraordinary. The fourth criteria on the USEF Selection Procedures for Eventing states that riders named to the team should show “the will to win.” No one has embodied that more than Boyd Martin.

Similar to Phillip and Oscar, Boyd hasn’t competed Shamwari much at all this season due to the unfortunate timing of breaking his leg, which makes their performance at Luhmühlen all the more impressive. If they could deliver that result in Germany with so few rides, think of what they could do in France with a bit more time to solidify the partnership.

As exciting as this team is, the strength and depth in the alternate list is equally exciting, and each of those talented horse-and-rider combinations deserve their own moment in the spotlight. I’ve broken out my analysis on our reserve squad in another post, so stay tuned for much more as we celebrate the announcement of Team USA. Go Eventing.