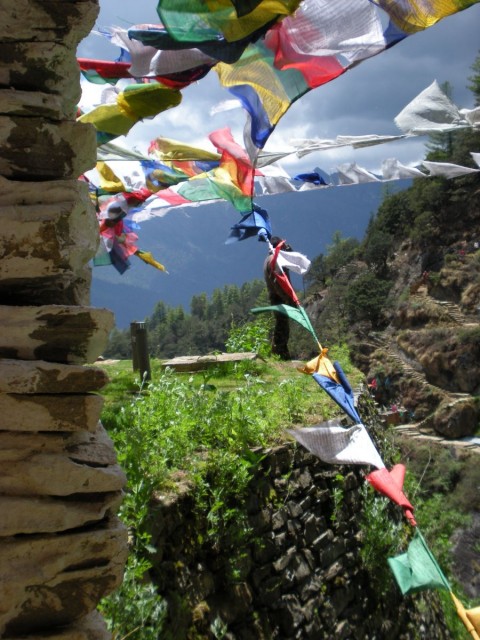 Hiking in the Foothills of the Himalayas, 2008!

I traveled to India and Bhutan in 2008 with a group of college students. This picture was taken during one of our hikes in the foothills of the Himalayas. To be able to say that I have hiked in the Himalayas is something I will never, for one second, take for granted. Our group consisted of students from various colleges all over Vermont. We were in Asia for one month and we were studying Buddhist art and religion.

I recall sitting in one of the most breathtaking monasteries one morning after a fulfilling cup of fresh squeezed orange juice and a vegetable omelette. None of us were attempting to become Buddhists overnight, though we were there to learn and embrace the culture. That morning we were all going to meditate as a group. We were sitting in a circle, cross legged on the ground and we were supposed to be incredibly quiet and relaxed. Of course my mind was buzzing. I couldn’t stay focused for more than 30 seconds at a time. Complete relaxation of the mind, combined with an intense amount of focus is something that is very difficult to achieve.

This idea of relaxation combined with a level of hyperfocus recently came to mind. Lindle, or she who makes dressage fun, has returned from her winter in Florida. Translation: Dressage boot camp has officially commenced! I have only had a few lessons so far, but the amount of concentration, relaxation and fitness that is required leaves me completely wiped out at the end of the day. That in addition to shoveling six months’ worth of hay and horse manure. Regardless, when I come in at the end of the day after having ONLY TWO dressage lessons, I am about as useful as a pair of flip flops in the winter.

Riding used to be simple in so many ways. I would get to Hitching Post Farm, hang out with my friends all afternoon, grab my horse and go for a ride. I would proceed by grabbing another horse and riding again. It didn’t matter if I was jumping, doing dressage or just hacking. The amount of deep concentration was relatively speaking nonexistent, at least for a fifteen year old. Of course I had some understanding of what I was doing, but basically I was riding lots of horses and having fun. I don’t recall losing sleep at night, or even experiencing competition jitters. Ignorance is bliss, am I right? 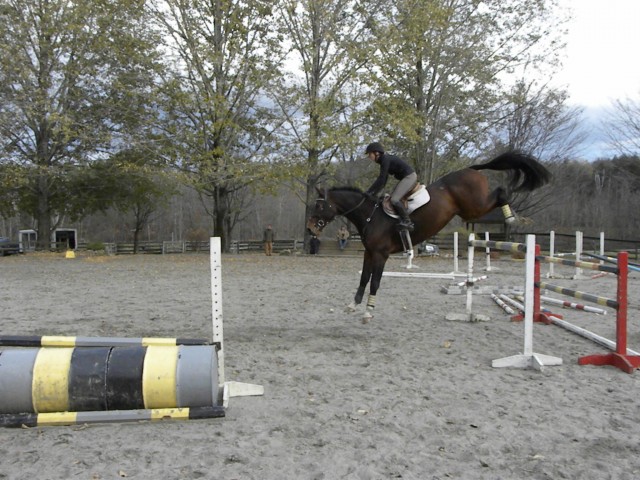 This is not to say that riding horses isn’t fun anymore. If it weren’t fun, or exciting I would have followed a different path in life. But here I am. I am an open book, waiting to learn more and become a better rider. Once you open the door to knowledge and you accept the fact that you need to gain the appropriate amount of skills in order to move forward in your training, riding all of a sudden becomes exponentially more challenging. I would also argue that one of the most challenging aspects of riding well revolves around the amount of focus that is required. Regardless of what level you are at, or what discipline you associate with, when the inevitable bar has been raised, so has the amount of focus. In other words, raising the level of difficulty in your riding and the amount of focus that is required to achieve a greater level of riding are synonymous.

In recent years, I have found myself becoming incredibly agitated when my ride wasn’t working out, or going as planned. I would get mad because I always expect more from myself and my riding abilities. Come to think of it now, I wasn’t mad because I was exhausted or my horse was being difficult, I was mad because I wasn’t able to maintain that level of hyperfocus. I would float in and out of a place of total conscious awareness, leaving me bobbing like a buoy with no clear direction. Evidently, being able to concentrate 100% on what you’re trying to accomplish is serious work. When you are aware of what you need to do, but cannot tell your body to do what your brain is telling you to do is beyond frustrating. Right now I am more aware than ever of the focus that is required to ride at the level I am riding at. This will only become harder as the bar is raised, but I am fascinated and lured in by the ultimate challenge. If I can start channeling my focus, so can you!