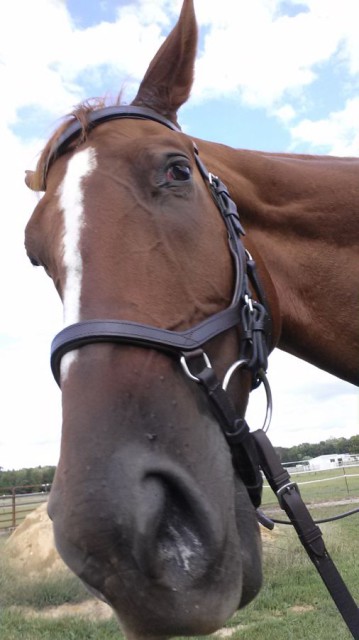 I can see it all now. The groom, flinging something across the barn aisle, running screaming out of the barn, jumping in a car and driving away, never to be seen again. The trainer — after a ride that would try the patience of Mother Teresa — shaking his head as he dismounts and leads my horse back to the barn. No, I don’t think I’ll try to send my Problem Child horse south with the trainer this winter to get a head start on the season. I think his wife might take a contract out on me.

It’s not really that I don’t trust the horse with someone else. Well, yes, actually I don’t. He doesn’t come with a list of stuff — he comes with a PowerPoint presentation. Sorry, it’s the easiest way to explain some of the techniques you have to use to bridle him and turn him out. It’s not that he’s bad. He only bucks four or five times in each ride and kicks maybe five or six times; as things go, that’s not really that much, is it?

He has a special set of blankets. If he is likely to roll, he has to have a certain blanket with a butt strap or he will shimmy out of it and run around naked. If he’s naked and rolls in anything remotely resembling dirt, he will get skin gunk so he has to have an immediate warm water (doesn’t like cold) bath with human shampoo — you guessed it, special brand. Can’t pull the mane — takes two people to put the twitch on, sometimes three, don’t try it yourself (reference that Mother Teresa comment above). Allergic to all kinds of stuff; I have a list.

Has to wear special boots that don’t break out the skin on his legs and hits behind under the boots. You have to feel it — you can’t see it — but put stuff on it anyways or tomorrow the legs will be blown up like stovepipes. He pays little to no attention to a chain shank, but will stop from a dead runaway if you crinkle a Starlight peppermint wrapper.

He eats everything you give him but it has to be in a special feed-ring tub or he’ll knock it out and eat it off the ground. No sweet feed, please. Soak his beet pulp; he likes it better that way. He likes his water lukewarm in winter and a large hole hay net; he will paw at a small hole one and get his front shoe stuck in it. Then he bangs until you rescue him.

He needs a special pad for his back. Don’t comb out his tail; he has no hair. He has to wear worn-out bell boots in the field because new ones or ones that fit better rub him and he’ll pick at them with his teeth. Don’t let him stick his head out of his stall too far; he’ll nip at other horses and people who walk by. But really he’s a nice horse and easy to work with; he just has his little things he does.

He bullies others in the field, so his turnout friends have to be very very low on the totem pole, and there’s no telling when he’s going to pick up, gallop across the paddock and bite someone on the butt just for a fun little chase. And rip the blanket. Separate turnout best. Sigh.

So you see, he’s like a problem child you wouldn’t wish on your worst enemy. So I have grave reservations sending him to someone that I like. 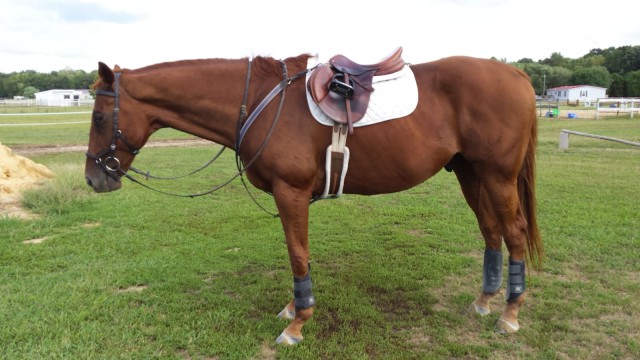 Just before he put his head down for a bite of grass and stepped on his rein and broke it….

Ah, as horses go, he’s not that bad. I guess I’m painting the worst of pictures. But you worry so much about your babies. Nobody takes care of them like you do. Of course. And I am just mortified when the horse does something awful or bad with someone else. And, as he is always making up some other bad thing to do, I never know what will happen next! Can you imagine if he hurt a groom or rider or broke something expensive; how do you apologize for a bad horsey moment? Somehow, I don’t think a bottle of wine will fix it. Maybe a check with a bottle of wine.

So as much as I’d like to have a successful horse, nicely trained, mannered and perfect in the barn, the paddock, the arena, the trailer and just hanging out, sadly that will not be the Problem Child — although there is always hope. This year. Or maybe next. And I’m protecting my trainer from serious injury, so there’s lots of good there. As well as keeping the hitman from the door, too. 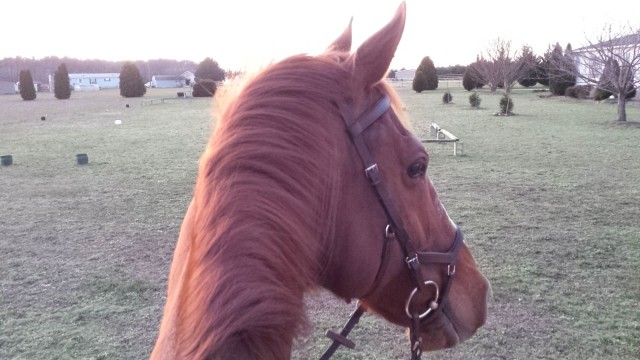 Planning his next disaster.