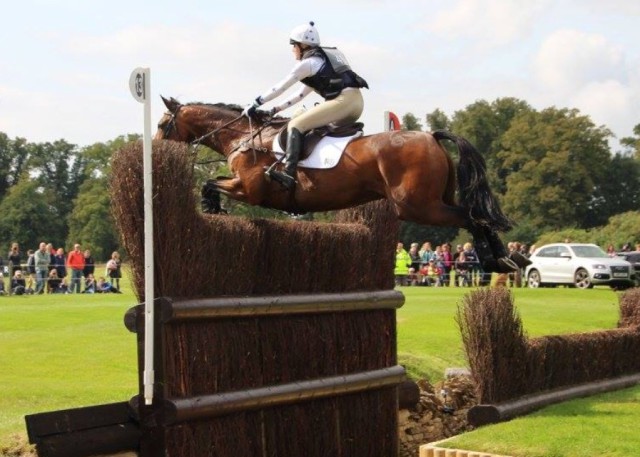 Abi Boulton of Tic Toc Eventing is one of Britain’s fastest rising stars. The 22-year-old made her name for herself when she debuted at Burghley Horse Trials in 2015 aged just 20, where she was not only the youngest to complete the event that year, but also best-placed under 25.

Based in Staffordshire, Abi, also a stalwart of the showing world, is firmly focusing on her eventing career. She tackled her second four-star at Burghley last year and moved up 10 places from the previous year — so what does 2017 hold?

“I am hoping to compete at Burghley again at the end of this year, improving on our performance in all three disciplines,” Abi says. “If I focus on that, then I believe the result will exceed 2016’s result (37th with Tilston Tic Toc, or “Ben”).

“It’s one of my favourite events and I am so lucky to have a horse to compete at this level, especially one that loves his cross country so much! My first time there wasn’t half as bad as the second, I think because in 2015 we didn’t know really what to expect, and just had fun — whereas in 2016, I felt a lot more pressure,” the young eventer explains. 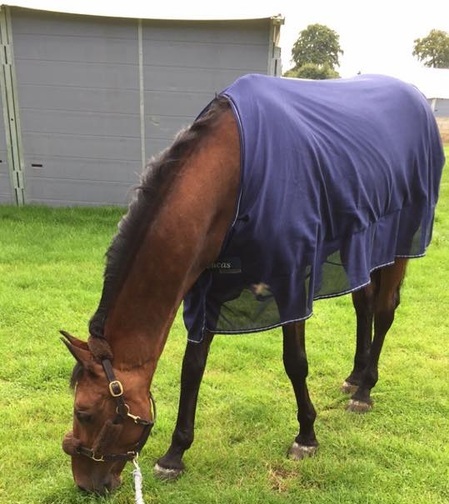 Abi has been busy in 2017 already, contesting the UK’s jumping and style (JAS) events this year, which are pre-eventing season indoor events with a combination of show jumps and cross country fences. She says she finds them to be valuable prep for the eventing season.

“I’ve mainly been taking my five and six year olds out to the JAS competitions,” Abi says. “With both horses new to the eventing scene this season, I thought it would be a nice stepping stone, rather than taking them straight to their first British Eventing (BE) outing.

“I’m also using any opportunity for them to get out and about as much as possible, which just allows them to get used to the routine of travelling to new places, and taking in the atmosphere of a competition environment. Another reason I compete at JAS is because I believe it benefits me as a rider, as the way in which you ride is also judged. I am always trying to improve my riding skills, so any critique or positives given really do help in my progression as an eventer.” 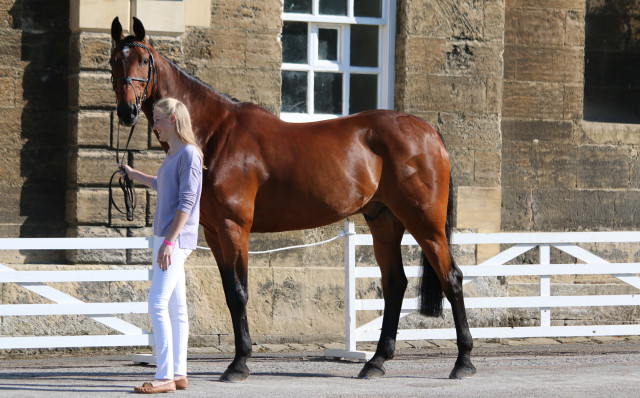 Abi Boulton and Tilston Tic Toc at Bramham in 2015. Photo by Samantha Clark.

We were all cheering Abi on in 2015 at her first Burghley, pictured above, but for us armchair enthusiasts, what’s the ‘step up’ from three-star really like — and how did she know Ben was ready?

“The immediate difference I would say is the atmosphere. It is on a completely different level altogether from two- and three-stars,” Abi explains. “The crowds, especially on the cross-country course, are so much bigger — even if it’s pouring with rain, which can be daunting for some horses new to the level.

“The jumping combinations on the cross country phrase are much more testing, and although asking for accuracy, it’s also asking for boldness, and you need a bold horse! It is because of this that we knew Ben was ready to tackle such a course; although a difficult horse in the dressage, he has always been so brave and fearless cross country,” she adds.

If Abi had to describe the 15-year-old Ben in three words, she says it would be “impatient” and “cocky” but also “reliable.”

“The first two words could be taken as weaknesses, but they can also be positives, as without these traits he wouldn’t have the guts to attack such four-star fences,” she muses. “It is how these characteristics of his are balanced in each of the phases that allows him to perform at his best for that specific discipline.

“I have the utmost trust in him; we have been teammates for almost seven years now, and know each other inside out. As to who knows best, we still have our differences of opinion, but I owe a lot of my eventing career to him!” 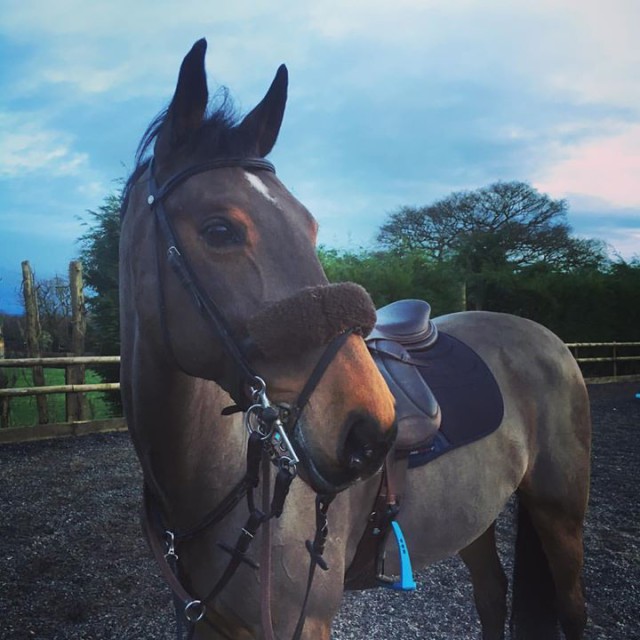 Ben after a training session at home. Photo by Abi Boulton.

Ben will be contesting events including Chatsworth CIC3* and Bramham CCI3* U25, leading up to Burghley CCI4* in 2017. Abi’s rising 7-year-old ride TT Little Guy will also be coming back from an injury sustained at the end of last year, so for him it will be the case of strengthening him back up and getting him back into the game, Abi tells EN.

“Then I’ve got Gin n Ginger, a 6-year-old chestnut mare who is owned by Anna-Marie Gallagher, Tanyah Ewen and myself. I am very lucky to have gained my first owners and such an exciting horse to compete this season; we will introduce her to eventing and just see how she progresses — we are aiming for Novice this year,” continues Abi, who’s sponsored by Hi Ho Silver jewelry.

“Then we have Drummonds Gunfire or ‘Gunner,’ a 5-year-old bay gelding owned by my mother and I. Finally, Gunner will be taking part in some British Young Event Horse (BYEH) classes and some events alongside them.” 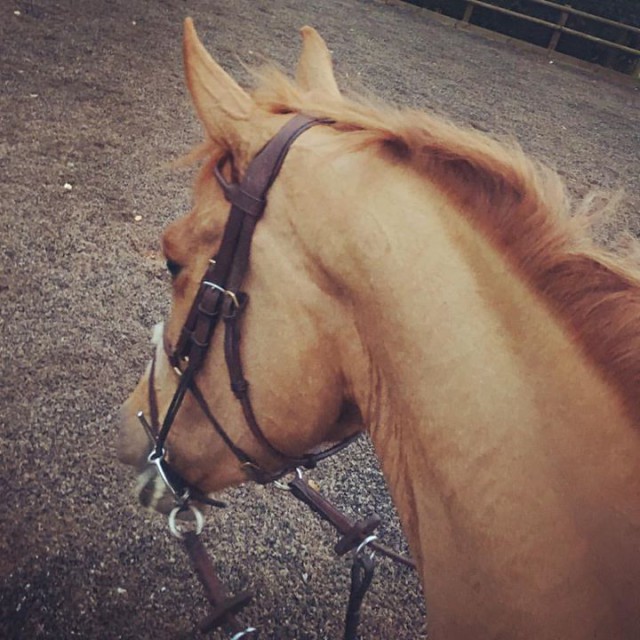 One of the biggest challenges facing someone of Abi’s age is the move up from young riders. Presumably the more established riders get offered the rides first due to their profile, and you can’t just ‘buy in’ a top horse, so producing your own is essential.

“Being out of Young Riders and moving up to Seniors is very challenging,” Abi agrees. “The Senior bracket is a big one and it is at this stage where many riders are unable to hold their own and excel against the more established professionals. With there being so many big names out there, it is difficult for a younger rider to get noticed and therefore unable to gain the attention of owners.

“I am lucky that I have now got to such a level that does turn people’s heads; however, I am also aware that Ben will not be competing at this level forever, and it is essential to have a string of younger horses to produce,” she says. “If you’re lucky enough for an owner to invest their already quite established horse in you, then that’s amazing, but otherwise having a good eye and being able to produce a horse does become a necessity.

“I was 15 when we purchased Ben in 2010, and he was at Novice. I learnt so much as a rider bringing him up through the levels, and it’s given me a lot of experience,” Abi adds.

Finally we asked Abi what are her goals for 2017.

She says she definitely wants to qualify for Badminton 2018, and to compete the rest of her string successfully. “I have set goals for all horses and want to meet and hopefully exceed the goals set for each horse. It would also be great to add more horses to the team, so I am always seeking owners who would like to be part of our journey at Team Tic Toc!” she concludes.