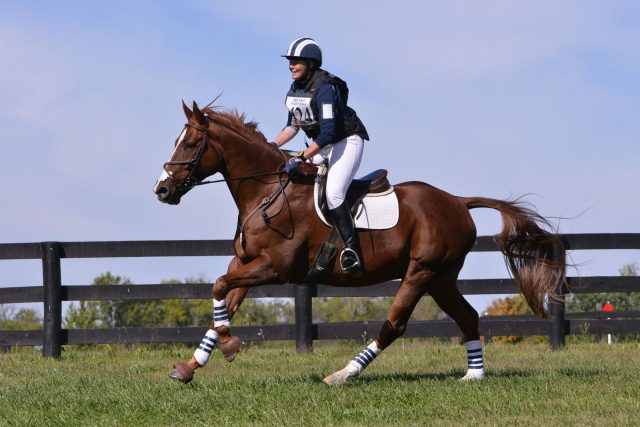 When I saw my pictures from cross country at Jump Start in September, I knew I had to buy them. There was a series of shots of Red and me approaching and going through the water that just cracked me up. My face, y’all. It was hilarious. They chronicled a series of emotions that spanned only four or five seconds but were six months in the making. As time passed, and I pulled up the pictures to look at them again, I realized how much they really represented. They were the turning point in a tough six-month journey of getting myself back to competition. 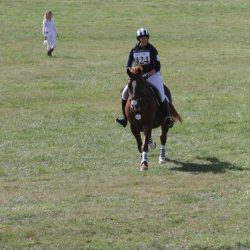 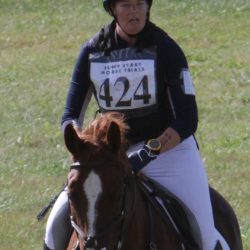 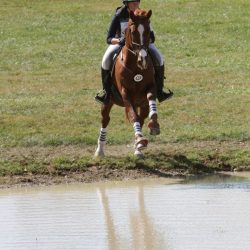 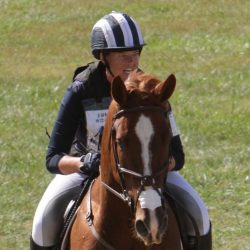 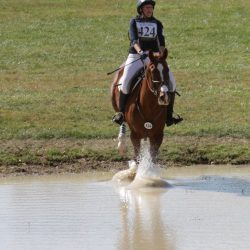 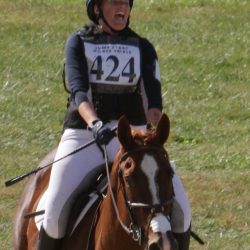 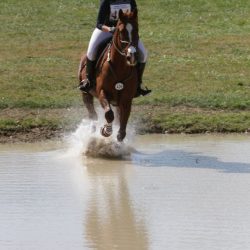 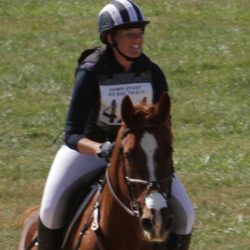 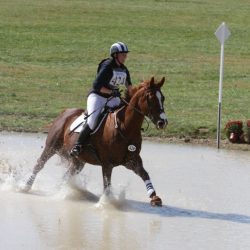 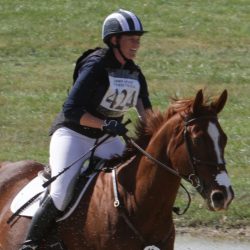 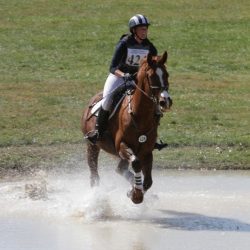 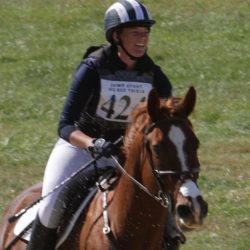 Allow me to explain my face in those pictures. I was in the lead heading into cross country, the final phase of the weekend, and I had walked the course my standard three times. I had my plan As and plan Bs. I was worried about the approach to fence four and my very first open oxer at #10, but other than that, I surprisingly felt OK.

As I was warming up, my coach Erika Adams, leader of the Road Less Traveled Event Team, joined me after doing some recon work and matter-of-factly said, “OK. The water seems to be a problem.” I didn’t really understand what she could be talking about. The water complex was almost at the end of the course and seemed pretty benign. You canter in, canter out, and have a nice log stack about three strides out. What’s the big deal?

At this point, I began to pay attention to the announcer, and word started to spread through the warm-up. Sure enough, Erika was right. Many horses, from seasoned veterans to green beans, were having trouble there. My fellow riders and I started talking with each other asking which route they were taking — Are you going in front of the Training log or around it? — and catching riders as they came off course: Did you make it through the water? Which route in did you take? This entry point, that entry point — it didn’t seem to matter. For whatever reason, on that day, that water was scary.

Now, Red is a seasoned guy. He knows cross country and has never been funny about water. But this was the new water at the Kentucky Horse Park, and he had honestly never seen it. And while Red is completely genuine, and I trust him, he’s got a spook in him. I couldn’t take anything for granted. I was in the pressure spot. It was mine to lose.

I was not expecting to feel such a competitive rush as I headed to the start box. I went into the weekend with a very philosophical view — I simply wanted to complete the event. Finish with a score. You see, in March I had a very bad fall. The kind you dread. I had just gotten on and was walking around the arena on the buckle, talking to Erika and my friend Mary Hollis when we went to walk over a pole. The sun on that crisp early spring evening cast a perfectly black shadow on the backside of the pole, and all I can think is that poor Red thought it was a ditch. From a standstill, he leapt over it so high that Erika thought I had walked up to the vertical next to it and jumped it. I wasn’t the least bit prepared for such a move; I was catapulted, did my best impression of a lawn dart, and landed head first. Hard.

The days that followed included several doctor visits, lots of x-rays, a CT scan, diagnoses of a severe concussion and vertebrae contusion, and very worried parents. I spent nearly a week in bed, had a headache for six weeks, and acute pain for nearly as long. I kissed the helmet I was wearing when I fell, whispered a “thank you” to Charles Owen, and tossed it out. But it would be months before I bought a new one. 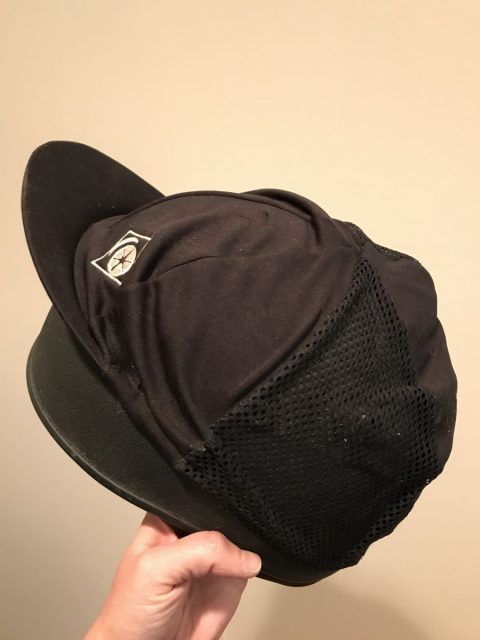 I opened another article that I wrote for EN with “I am your amateur’s amateur.” I compete at the lower levels with my one perfect chestnut unicorn. This sport is supposed to be fun for me, an outlet, a challenge, and bring joy. But suddenly, when my nose rubbed close to the worst-case scenario, I found myself reassessing. My fall didn’t happen because I was doing something extra risky or irresponsible. We simply walked over a pole like we’d done hundreds of times before, and Red just misunderstood. I began wondering if I could get back on.

Fortunately, I am surrounded by incredibly supportive people. Friends kept Red in work and checked on me frequently, telling me to listen to my body (I’m looking at you, Linda). I sobbed when I told Erika that I wasn’t sure I could get back on. And if I could, if I wanted to. She told me it was OK to be feeling that way. No one ever told me to just “get over it.” Everyone around me knew that I was genuinely having a hard time. Erika told me, “If all you do one day is put on your boots, tack up Red, and hand walk him around the arena, why that’s a huge win. Just take your time.” 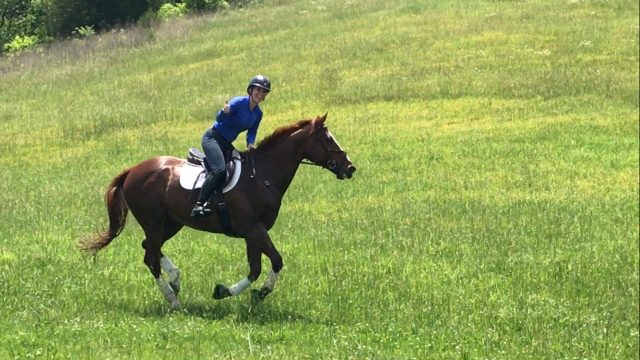 Erin Liedle riding Red for me when I wasn’t ready yet. She threatened to steal him after this. Photo by Katherine McDonough.

I spent a lot of time grooming Red and watching friends ride him. As time passed, I began to think I could get back on. Not jump again, but get back on. I shook as I finally tacked Red up and led him to the arena several months after the accident. I cried tears of relief when I sat astride Red as Erika had one hand on my boot and one hand on the reins. I smiled as she led us around the arena. And step by step, I asked her to let go.

Beginner Novice at Jump Start became the soft goal — something to work toward, but not obligatory if I didn’t feel ready. Trotting led to cantering. Walking over poles slowly grew into cantering cavalettis. Before I knew it, I was jumping small courses again, Erika always making sure I wasn’t too uncomfortable. She was like the parent who helps you learn to ride your bike without training wheels — holding on and keeping you steady until suddenly, you realize you’re doing it on your own. I progressed from lessons, to a dressage show, to Starter at River Glen. Jump Start was going to be the show where I put it all together and faced my fears. 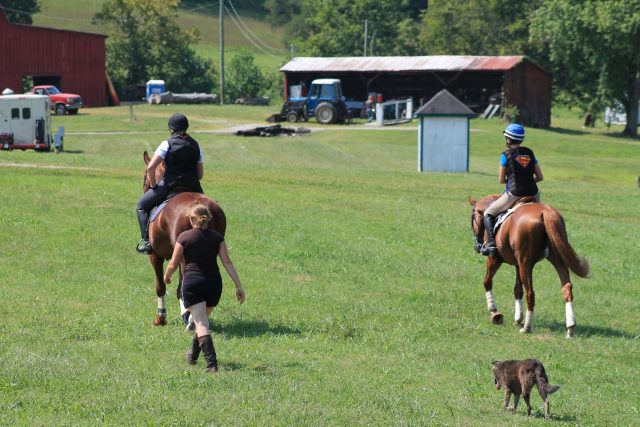 My first cross country school after the accident. Photo by Kathy Pate.

So, I meant what I said that I just wanted to finish. I am a super competitive person, and even though there was a part of me that shouted, Pfft! That’s garbage! You totally want to win!, I genuinely just wanted to get back out there; get through the finish flags on the last day and not only make sure I was OK, but remember why I fell in love with this sport to begin with. Emotions were running high.

So, there I was. Circling the start box, talking to Red and to myself. An odd calm came over me as they counted me down. For reasons I can’t quite explain, that water suddenly represented everything I had been through in the last six months — something that should be so normal causing so much trouble. I felt that if we could get through that water, that weirdly bogey water, we could do it — I could find my joy again. For a moment, I felt conflicted. Because as much as I wanted to just finish the weekend no matter where I placed, when I found myself in the lead, I also wanted to win. This wasn’t part of the plan! Don’t do something stupid trying to win and mess up six months of work getting back to this point!

When I was sent out of the box, the task at hand clicked back into focus. And as the jumps appeared and disappeared between Red’s perfect ears, I began to realize something — being on course was healing me. I didn’t have the bandwidth out there to think about anything else but Plan A and Plan B and Red and me. With each jump, my smile and “Good boy!” got bigger and louder.

With most of the course behind us, I approached the water. I sat back, gritted my teeth and said aloud, “You get in this water — you get in it!” I know I was saying it to Red, but I think I was also saying it to me. Red leapt into the water and I was overcome with happiness. In that moment right there, when his hooves cracked the surface of the water, it was as though my fears shattered right along with it.

When I cantered through the finish flags, I buried my face in Red’s mane, arms around his neck hugging him. I wanted him to know how grateful I was for him — the most perfect horse for me. When I did decide to get back on months after the fall, Red allowed me to take my time, never wavering, and helped me find my way back. We had a long walk back to the barns through the infield. For a few minutes, it was just us. It was perfect.

I know this sounds as cliché as it gets, but I really would have been happy to just finish. Winning was the icing on the cake at that point. The win didn’t matter to me as much as finding myself out there on course with my partner, surrounded by friends, teammates, my coach, and my folks stalking scores from home. It wasn’t just that they all understood what going through those finish flags meant to me, but that they all helped me get there in one way or another. Yeah, it’s just Beginner Novice; sure, it might not sound like a big deal. But it was an Everest to me at one point. And I managed to scale it. 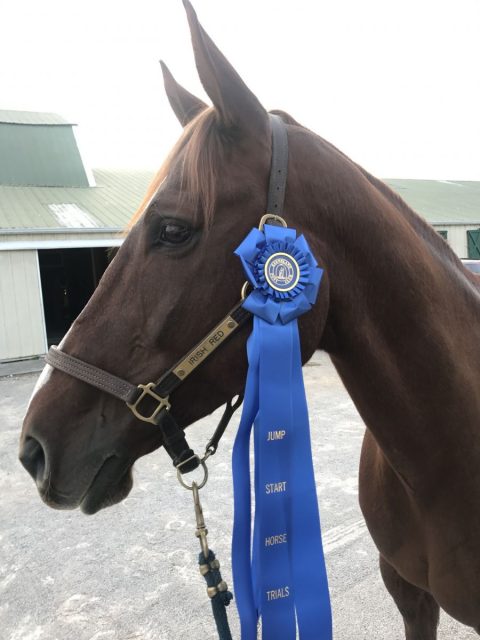 And you know what? It would have been OK if I decided to stop riding. And it would have been OK if I only did dressage. But, I did what I felt was right for me at a pace that was right for me. I said no to some things and said yes to others. I had my plan and I just slowly kept at it. Am I the same rider I was before my fall? No. But, I don’t want to be. I haven’t forgotten it, nor do I try to block it out of my mind or pretend it didn’t happen. I remember it so that it can make me a better rider. But I no longer allow it to have control. And, I am able to appreciate that, in some odd way, it has helped me.

In nearly every picture of me from cross country at Jump Start, I am grinning like a kid on a pony running in a field. 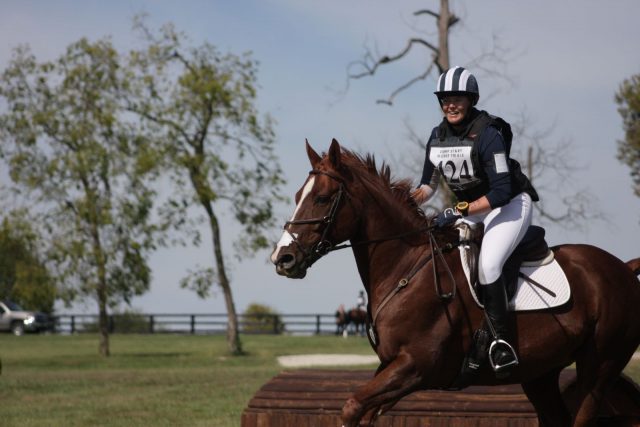 I found my joy again.