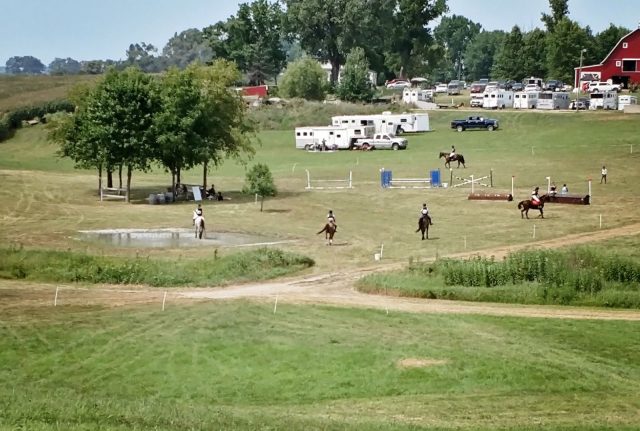 The film Field of Dreams immortalized the words “if you build it, they will come,” and Dr. Jim McNutt and Susan Brigham used the phrase as inspiration when they decided to host an event at their farm near Iowa City.

The Catalpa Corner Charity Horse Trial first ran in 2007 and remains the only USEA recognized event in the state of Iowa. Held annually the first weekend in August, Catalpa Corner offers Beginner Novice through Preliminary divisions and has become a beloved fixture on the Area IV calendar.

Catalpa Corner is a special event for many reasons. Created in memory of their 16-year-old son, Madison Brigham, who died tragically in a car accident in 2004, hosting a horse trial became a project into which Jim and Susan could channel their grief. 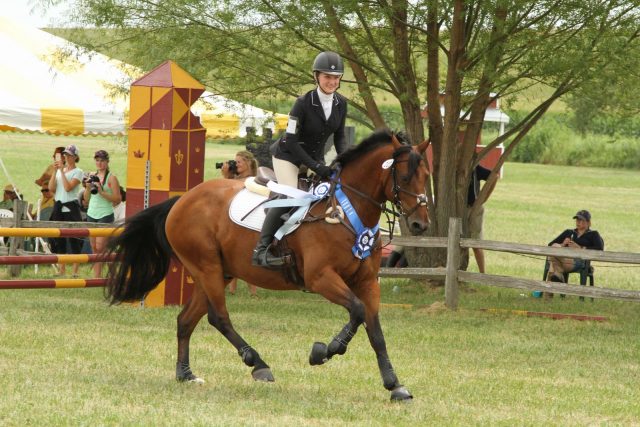 “Madison was a quiet and clever soul — an avid rider who enjoyed foxhunting, tennis, history and his many friends,” Susan said. “After the devastating loss of Madison, our foxhunting friends Camie and Jay Stockhausen suggested developing a horse trial in his memory, as Iowa was lacking an event.”

The property spans about 100 acres of beautiful Iowa countryside — a mix of pasture, woods, and undulating farmland used for corn and soybeans. While the rolling terrain was perfectly suited for a cross country course, a plethora of work was required to transform the property, which had formerly served as a pig farm.

Aided by the local Pony Club and a core group of dedicated friends, Jim and Susan “cleared woods, mowed down 13-foot high weeds for galloping lanes, and ringed the corn and soybean fields with cross country jumps, banks, ditches and water complexes.” 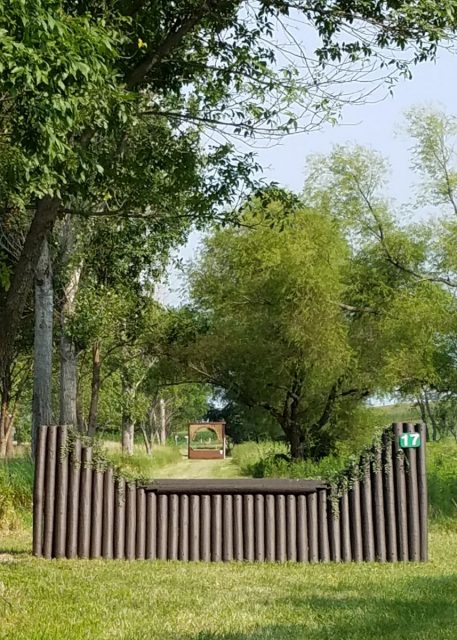 One of the galloping lanes on the Prelim course. Photo by Derith Vogt.

Paul Welsh stepped in to build many of the permanent cross country jumps at Catalpa Corner, and the late Phil Sawin served as the first course designer at the venue.

Phil laid out a track “designed for the young eventing Iowa population of riders, which was precisely what was needed at the time,” Susan said. “The park’s repertoire of jumping challenges has grown to standard over the last decade as riders have advanced.” 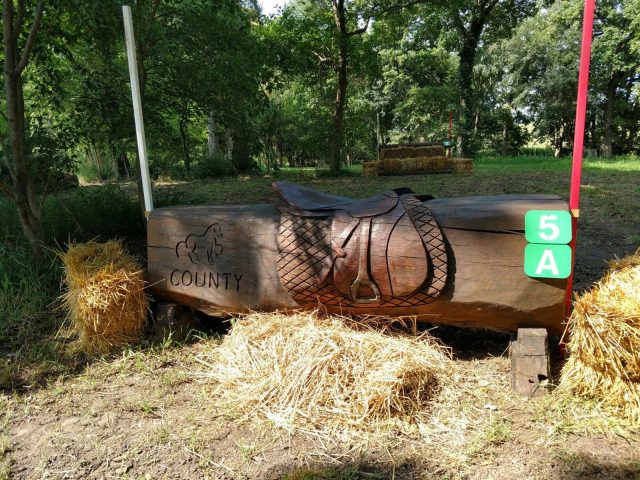 One of Gary Keenan’s beautiful carvings on the Preliminary course. Photo by Brian O’Connor.

“The park is lucky to have a fantastic chainsaw artist, Gary Keenan, who projects his skill with every tree fall,” Susan said. “USEA officials Pattie Clement and Vicki Rauwolf have continually guided the development of the park with their professionalism.”

Camie Stockhausen, who foxhunted with Madison and helped spearhead the transformation of the property into an eventing venue, serves as Catalpa Corner’s show jumping course designer.

“The first stadium course reflected Madison’s interests,” Susan said. “There was a tennis racket jump, a foxhunting set of triple jumps, a cowboy and cowgirl jump. The current show jumping course is designed to give children and adults alike a chance to remember the joy of J.K. Rowling’s Harry Potter series. Local painter and rider, Barbara Hall, greatly contributed to the artistry of the stadium jumps. 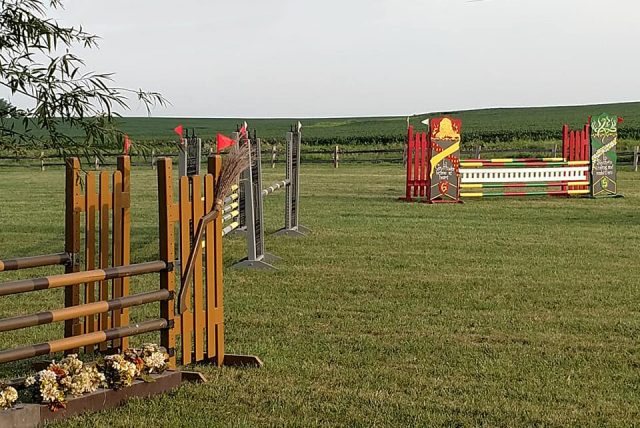 “Every other year a themed jump is added, and next year’s addition is planned to be a Whomping Willow and Flying Ford Anglia. Camie always uses the slightly rolling grass arena and intriguing images to provide an interesting challenge for the riders.”

After organizing the event for a decade, Susan passed the reins in 2017 to new organizer Ali Hayford, who has been involved with the event as a volunteer from the very start. Susan continues to work behind the scenes and meticulously decorates the cross country course and show grounds. Both Paul Welsh and Steve Wildman help maintain the property year-round and play an integral role in preparing for the event. 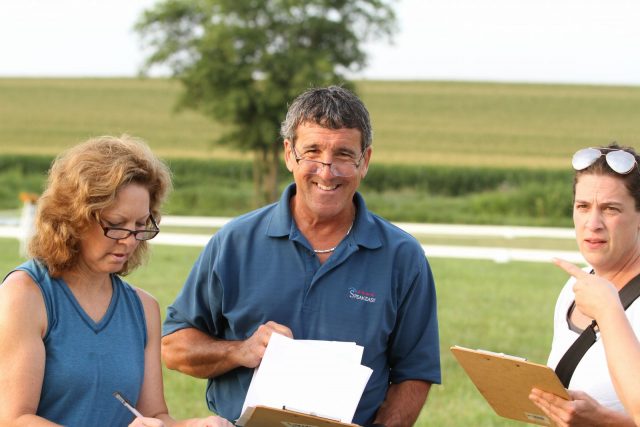 Brian O’Connor — a familiar face at events all around the country and now the voice of Catalpa Corner. Photo by Derith Vogt.

Catalpa Corner also made the financial commitment this year to wire the property for permanent announcing. Brian O’Conner served as announcer and also wired the barns so announcements could be made all throughout the property, which proved critical over the weekend.

“On Sunday we had an intense Iowa rain storm come rolling in round 8 a.m., and because of this new system we were able to get all riders and horses back to the barn and covered safely,” Susan said. “We had an hour hold, which Brian aptly made up during the day to finish on time.”

Susan also created a new cupola garden entrance for the park for this year’s horse trial, and updated the much loved “Party Barn” with new lighting and paint. The secretary’s office also received a facelift with local antiques. 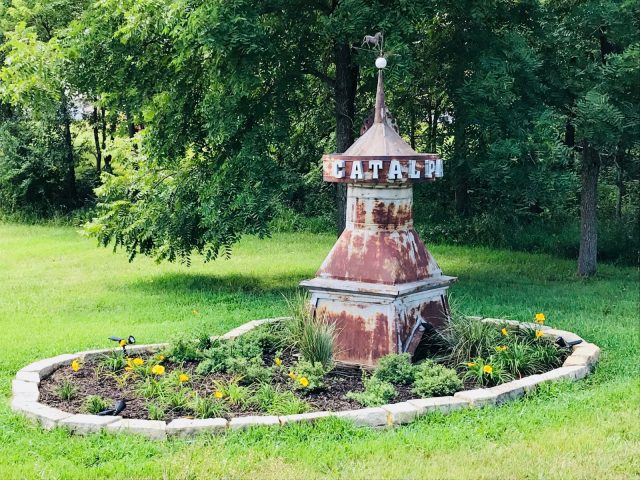 For Susan and Jim, Catalpa Corner Horse Park is not only a way to remember and honor their son, but also a way to provide a wonderful venue for horses and riders to enjoy throughout the year.

“The horse park and horse trial would not exist without an extensive volunteer force that descend on the farm and perform the manual labor of love that is necessary to run this adventure,” Susan said. “Seeing everyone’s love, patience and hard work pay off is gratifying. Iowans know that, ‘If you build it they will come,’ and they have.”