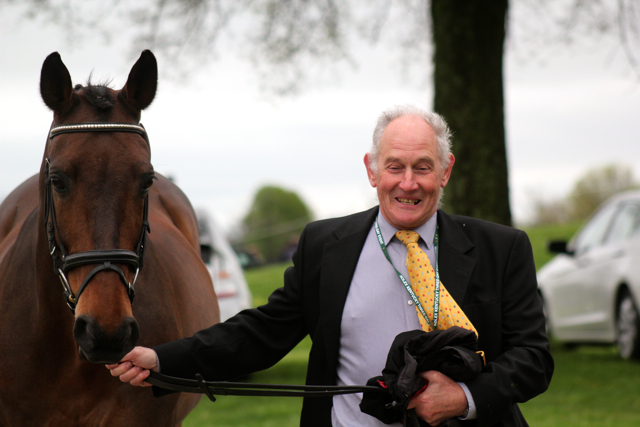 John Alliston in his happy place at Kentucky.

In a time of unimaginable loss for the eventing community, it is with a very heavy heart I must tell you that John Alliston, father of California-based British eventer James Alliston, died unexpectedly on Thursday, June 9, in Gloucestershire, England.

He is survived by his incredible wife Petey, wonderful sons James and Mike, and a slew of family, friends, colleagues and students who are left reeling with the news that one of the most treasured people in their lives is with us no more.

John was well known as a distinguished agricultural academic in the UK, serving as an Emeritus Professor at the Royal Agricultural University in Cirencester, England, at the time of his death. Last year he was awarded the Farmers Weekly Lifetime Achievement Award for dedicating more than 50 years of his life to agriculture and education and, above all, to other people. 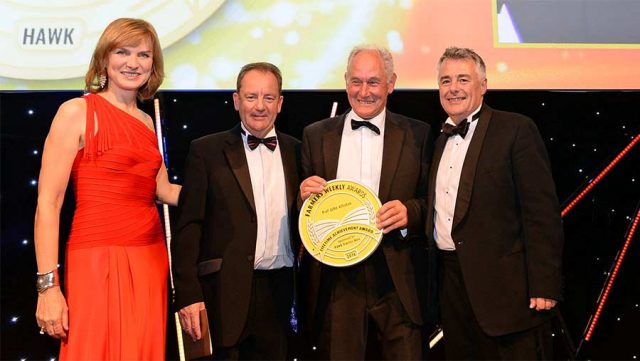 He served as a much-loved Dean of Agriculture during the more than 20 years he spent with the university, and his legacy in academia will be most defined by the way he mentored and counseled the next generation.

Possessing an uncanny ability to see potential in others and gently but firmly coax it out, John played a critical role in establishing the Institute of Agricultural Management Leadership in 2002. With a passion to improve the leadership qualities of his students and develop a vision for the future of agriculture in the UK, John helped shape the scope of one of the world’s most important industries.

But John would never be one to boast or brag about these achievements. Persistently and even stubbornly humble, he was much more interested in other people, and that fact is perhaps best emulated by the way John and Petey welcomed others into their home.

If a door can be a window to the soul, the door to John Alliston’s kitchen says everything you need to know about him. John and Petey ushered countless members of the eventing community into their kitchen over the years, beckoning them to leave a permanent mark on their hearts and home. 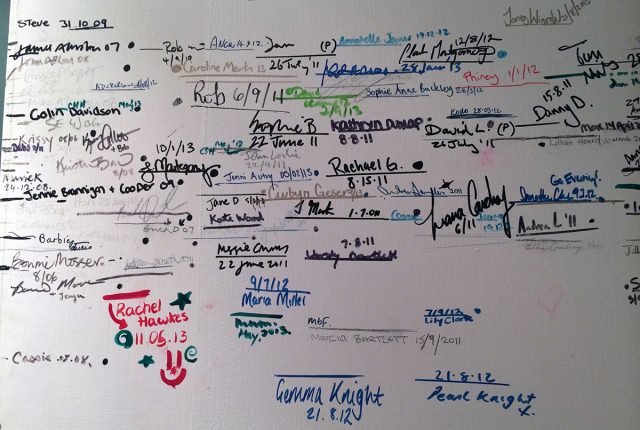 One small section of the Allistons’ signed kitchen door.

No sooner would you step foot into the kitchen when John or Petey would hand you a pen and ask you to mark your height and sign your name on the door. Oh the stories that kitchen door could tell. There are names of Olympians signed there. Names of riders who appear on magazine covers. It is a prized collection, an Eventing Who’s Who.

But to John and Petey, the names on the door all fell under one simple label: family. Because when you entered their home, whether as a practical stranger or a longtime friend, you were family.

From a logistical standpoint, this made all the sense in the world to John and Petey. When James moved to America to pursue his eventing dream, members of his new American eventing community would inevitably need a place to stay in Gloucestershire. If John and Petey discovered you were in the area for any reason at all, the decision was made for you as to where you would stay. 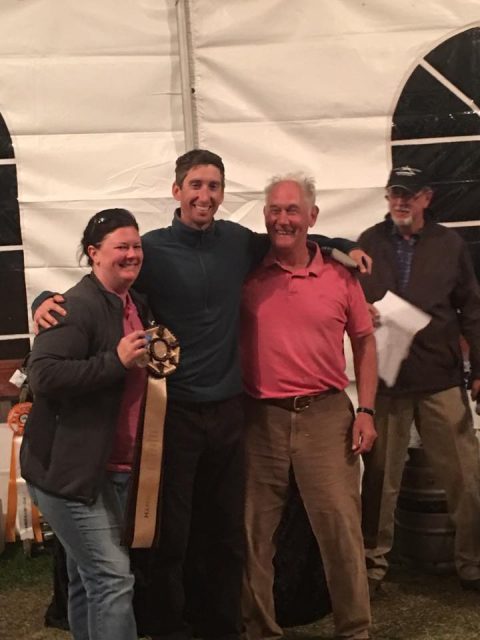 Nothing made John more proud than to cheer for James at events.

I experienced my first taste of this hospitality within minutes of meeting John and Petey five years ago. As devoted supporters of James’ eventing career, John and Petey always traveled from England to support him at the Rolex Kentucky Three-Day Event and various other horse trials throughout the year, and I had the pleasure of meeting them at a party in Kentucky.

When I told Petey I was excited to be traveling to Badminton Horse Trials for the first time, she asked where I was staying. I had found a tiny hotel in Bristol, about 20 miles from the event, with the right price for EN’s travel budget. Petey promptly informed me that I would be canceling my hotel reservation and staying at their home.

Fairly stunned by such an overt display of kindness and generosity from someone I had just met, I was politely attempting to decline Petey’s offer when John stepped in to both meet me and confirm within the same sentence that I would be staying at their home, and they would not take no for an answer. 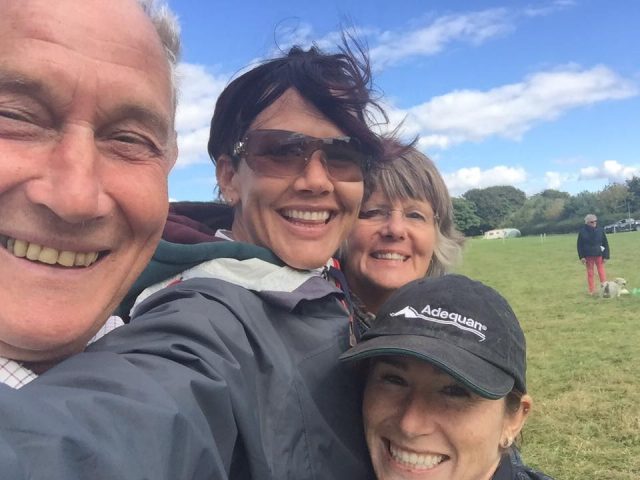 Everyone who met John and Petey instantly became family.

I didn’t realize it then, but John and Petey would ultimately become another family to me. For anyone who has met them and been taken under their wing, you will know this feeling all too well. In my first overseas assignment for EN — and my first time driving a car on the other side of the road — there are no words to truly capture what their kindness meant to me.

John possessed an innate ability to make you feel welcome, respected and valued. He also had a wonderful laugh and a wickedly sharp sense of humor. I will forever treasure the memories from the hours spent in the Allistons’ kitchen, John topping off my wine glass and Petey trying to convince me to eat just a bit more.

In that way John and Petey created a sacred space. There is a sense of safety within those kitchen walls that leaves anyone sitting at one of the weathered benches feeling grateful to have captured that moment in time, one full of laughter and gratitude and appreciation for this collective experience that binds us all together — the intoxicating love of horses.

That is how I will always remember John Alliston.