The equestrian community lost one of the greats on Thursday, February 16, 2017, and it is a loss that will be felt for years to come. Javier Corradini, 38, best known as trainer and eventing coach for Columbia Horse Center in Laurel, Maryland, left his life the same way he lived it — full of grace, optimism, love and fireworks with both his beloved wife, Cate, and his mother, Cristina, by his side.

A beautiful Eventing Nation article from February 2015 spoke about Javier’s fight against cancer, and the remarkable way the equestrian community rallied around to support him and his family during treatments, remarking on how strangers from Boston to Buenos Aires stepped in to help when Javier was sent away to Sloan Kettering in New York City for several months.

For people who don’t know Javier, they might wonder, Why him? Why did so many people reach out to this particular person? There are hundreds of reasons, thousands. I would like to share a few that hopefully will give you a glimpse into the remarkable life of a man who left us far too soon, but whose legacy will be felt for generations to come.

First and foremost, Javier was a lover of family, his own and yours. The son of two Argentinian equestrians, he was born May 12, 1978 and began eventing shortly after he learned to ride at the tender age of 7. After graduating from school, he was the only civilian accepted into the Esquela Militar de Equitación for an 18-month course of equestrian studies where he rode six hours a day, six days a week, with an emphasis on three-day eventing. 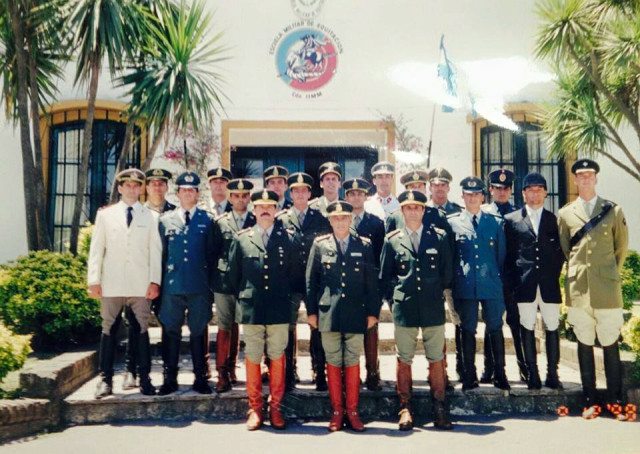 Javier Corradini, second from the right, at his graduation from Esquela Militar de Equitación in Argentina.

When he arrived in America, he went to work for Mike Smith at one of his riding schools in Silver Spring, Maryland. Javier was young and naive, but he could ride like no one else we’d ever seen. People instantly loved him. There was, of course, his charisma, his good looks, and the fact that he couldn’t speak a lick of English, which was endearing. But more than that was an intense interest in all people. Every person who met him felt individually special.

In the spring of 2001 he came to Columbia Horse Center to work as a trainer, instructor, coach, and assistant to myself, then the general manager. He headed up the Equi-Lease Program, coached the Eventing Team, taught lessons, trained horses, designed courses for our shows, and was rallier-of-the-troops during the challenges that occasionally befall a large riding school.

But these are the things he did. What is important, what made him so remarkable, is how he did them, and why. He was an old soul not only in the complexities of life, but also in knowledge as a student of the horse. Javier approached every one of them — from champion eventers to the oldest school pony — with utmost respect for their intelligence, their history, and all the ways they are superior to humans. His connection to horses was rare, and his mastery went far beyond even that of the experts, because he never allowed himself to stop learning.

Ryan Minor, a young trainer who worked under Javier — and was personally mentored during a particularly difficult time in his life — has said, “When I didn’t understand something specific during a training exercise, Javier stopped and explained the history behind forward riding to me, which made everything clear. He wanted every student, every rider, to trust he would share the most accurate and valuable information possible.” 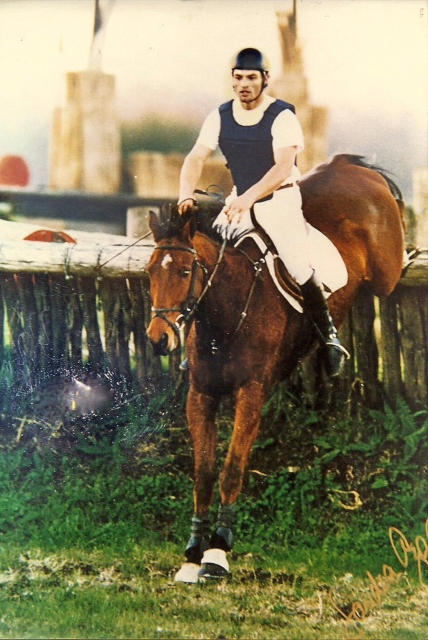 Javier Corradini competing in Argentina before his move to the U.S.

Certainly, he took his role as a teacher and trainer to the highest level, embracing the responsibility with vigor and his own never-ending quest for knowledge. But there was much more. He lived his life with compassion for the weary, including volunteering his time to teach military cancer patients how to ride. When a teenage boy was dating a CHC student, Javier recognized his desire to learn and understood his awkwardness, so he offered to meet him at the barn late at night to teach him to ride privately.

And when Javier took a group of students to a show in Lexington, one of the young girls, Errika, knew she was showing her horse for the last time as the family she leased her from had to sell the mare.

Errika says, “During the flat class, she suddenly went lame. So lame, in fact, that I pulled up and stood in the middle of the ring and did not continue the hack. I felt confused, sad, concerned, and angry all at the same time. How could this horse, who had never been lame before, go lame during our last ride?! I kept my composure and held the tears in. I got her back to the barn so she could rest, but was still keeping the tears back when Javier found me and said, ‘Come on, we’re going for a ride.’ We got in the golf cart he rented and drove to the top of the cross country field. He finally said, ‘It’s okay, you can cry now. Let it out.’ And I did. I cried and cried until I couldn’t cry any longer.”

Javier set the highest standards for himself, yet lived by his own rules. One student remembers being in a beginner class when Javier cantered gracefully through their lesson, smiling and waving at all the kids. “No one stopped him or said anything because he was Javier.” Javier Corradini with his daughter, Georgia.

When I made my long time dream of moving west to Jackson Hole, Wyoming come true, Javier offered to drive me 2,000 miles across country in my truck, pulling my trailer with my horse, my dog, and all my worldly possessions. I was well versed in his occasionally irritating Argentinian chivalry, so I knew he would insist on driving. This was fine, but then at 4:30 a.m., on the chilly morning we left, he handed me the keys and told me to drive.

I was surprised, but got in, started the truck and we headed west. After 200 miles he took over and drove the rest of the way. A year or so later, I asked him why he did that, and he said, “You waited so long to make your dream come true, and worked so hard to get to Wyoming, it was your place to begin that journey, not mine.”

Someone said to me recently, “Who even thinks like that, with that much concern and respect for the dreams of others?” The answer is simple. Javier did.

His life was so vibrant, so electric, even near the end none of us really thought he wouldn’t pull through. He’d battled too hard for too long, and loved his family with such ferocity. He fought with everything he had, every inch of the way. Cancer couldn’t get him. After all, he was Javier. In our world, he was Superman.

The lessons we will learn from why he left so soon likely won’t be revealed right away, but rather in Javier-time — which means when he is darn good and ready for us to understand. In the meantime, the community is once again rallying around his family — the love of his life, Cate, their two little daughters, Georgia and Charleigh, his mother Cristina, brothers, Ignacio, Joaquin, and Sebastian, and his mother-in-law, Eugenie.

A college fund has been set up for Javier’s daughters, ages 2 1/2 and 9 months. Please click here if you would like to donate. Information about his services can be found at this link.