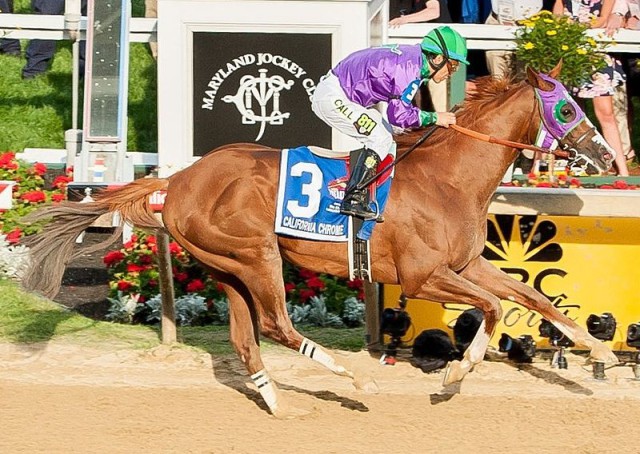 It’s Friday, June 6, which means Belmont Stakes day is almost here. The nation is swept up in “Chromania,” and I find myself reading the Bloodhorse, the Paulick Report and Horse Racing Nation each morning (and often) for daily updates. The support for California Chrome and his quest for destiny has been universal: rival trainers, racing legends and ordinary fans are all firmly on the bandwagon. If you need an inspiring way to spend your Friday, and, like me, you can’t get enough Chrome, here are a couple must reads before 6 p.m. tomorrow.

William Nack has penned a fantastic piece for ESPN, weaving the stories of former Triple Crown champions in to California Chrome today. I remember the first time I stumbled upon Nack’s story of Secretariat; it was in my college library, where I was supposed to be “researching” notes for an important project. Two hours later, I was still sitting on the floor leaning against a bookcase, soaking up every word from the race call “… he is moving like a TREMENDOUS MACHINE …!”

Bill Nack’s writing will give you goosebumps; his storytelling is magical, and this article is no different. From meeting 33-year-old Citation, to watching Smarty Jones in Penny Chenery’s box with Bill Murray, he tells the tale of how long it’s been since the Crown was won. Here, go read it: My Years Chasing the Triple Crown. You can thank me later.

The Bloodhorse created a special feature in this photo essay: Waiting and Waiting, for Crowning Glory. Comments from past hopefuls, top trainers and Triple Crown spoilers are mixed with stats from the track, all weaved in with perfectly timed images to make this piece a home run. This isn’t just an article; it’s an interactive experience, and it makes it clear just how difficult the Triple Crown challenge actually is. Will this be the year? Many kudos to the Bloodhorse for this effort.

And finally, I can’t in good conscience post a final article before the Belmont without including this video, the greatest performance by a racehorse of all time. I’ve watched it a hundred times; it never gets old. and I always tear up. “Secretariat by TWELVE … by THIRTEEN! Secretariat is ALL ALONE!”