It was nearly dark when an EF-1 tornado ripped through Stable View Farm last Thursday, Feb. 6, and as it was just a matter of minutes before many thousands of dollars worth of damage was left in the storm’s path. Stable View, a top-class venue for all disciplines in the Aiken area, was left to start the repair process with the first dressage show of the season approaching that weekend. Remarkably, and as a true testament to the tenacity and resilience of Stable View’s team and the support of its community, the show did go on. Barry Olliff, who owns Stable View with wife Cyndy, kindly shared this update.

We thought that it would be possible to get away for a few days between events.

Stable View is now pretty much 24/7 and with the busy season coming up, there seemed to be a window of a few days.

Having had a few days holiday in Bermuda, we were on our way home when, while still at the airport, I received a phone call from one of my colleagues saying that Stable View had just been hit by a tornado.

It’s not good when you are sitting 1,000 miles away, not able to do anything and wondering if it’s true — could a tornado really come to Aiken, and, more specifically could one visit Stable View? 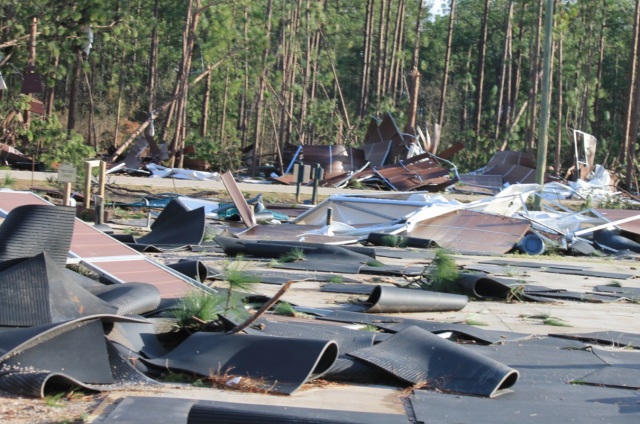 Our returning flight was already three hours late — it had to come from Atlanta, through the same storm system that had just hit Stable View. Now we were going back home through that same storm, so we picked up a further delay. Cutting a long part of this story short, we got home at 2 p.m. on Friday to find Springfield Church Road cleared (that was a surprise), and all the lights on (another surprise).

After driving around Stable View, I guess the reality started to set in.

The first thing was to sort out how the recovery was going to work!

Define the priorities — that’s what you do, right?!

There’s a dressage show tomorrow, you know that 100 stalls were tossed into Springfield Church Road and beyond, but they’re not a part of this show. You also know that riders will be arriving from lunchtime, so paths, water, shavings and electricity have to be cleaned up, turned on, delivered or tested. 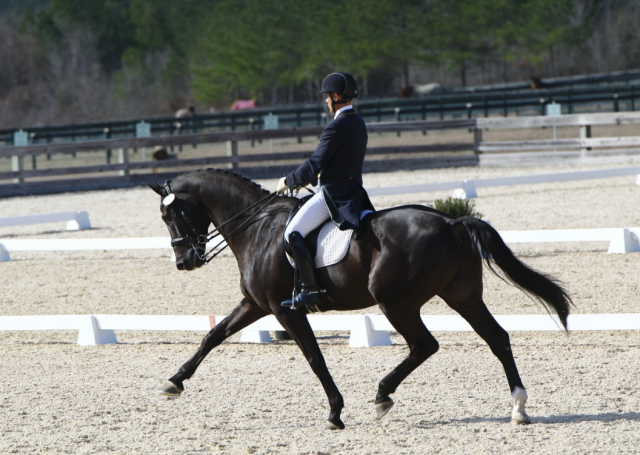 Along the path of the tornado, paths were covered in branches (and trees), water pipes had been ruptured by falling trees, the shavings trailer was on its side with bags spread around, and the electricity for our wells was still off.

Then there were the crews. After a “problem” the “professionals” come out. Can we help? We’ve got this covered. We know what we’re doing — you can trust us — their rates are $40/hour upwards.

In addition, parts of the cross country course were a real mess, 60 longleaf pines were down (Mark Phillips won’t be very happy about that — they were a major part of his course DNA) and in some places, what was a cluster of trees is no more. Some of those longleaf pines are over 150 years old. 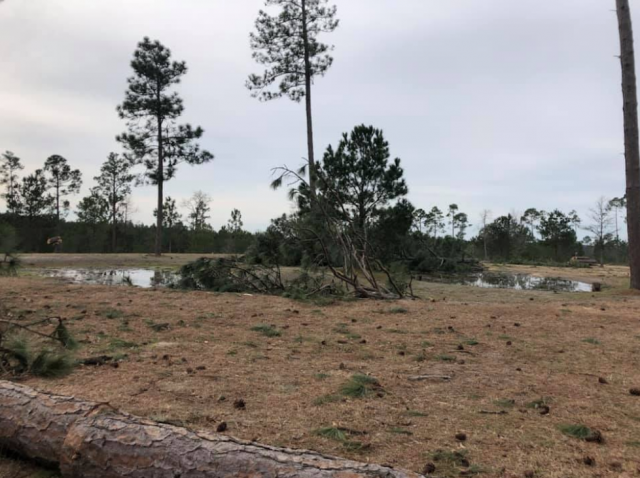 For the record, Cyndy and I love trees. Over the years we’ve planted so many more than have been removed or have come down. To now look at over 60 trees that were felled by a 105 mph tornado in a period of five minutes seems impossible, almost as impossible was that no one was hurt and that no horse was injured. 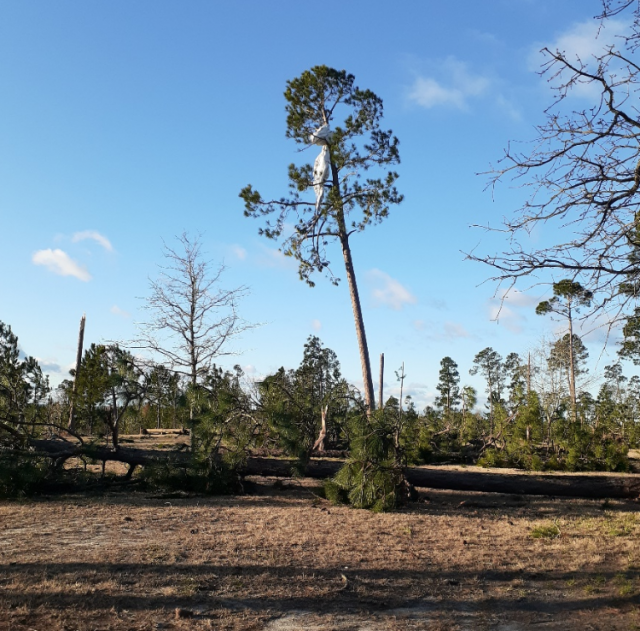 While all of this was going through my mind at 7:30 last Friday morning, decisions needed to be taken — decisions that were going to affect Stable View for the next few years.

Then there were the phone calls, the texts and the emails — some were good, some not so. Some were from friends, well wishers, some from the press and some from well, not so “good” people.

Fortunately, we’ve been loyal to the professionals we’ve worked with. We’ve used them time and time again, so surely these are the people you rely on and go to for advice in times like these?

Another thing that’s going through your mind is what’s insured — there was no point insuring the 200 stalls — no one was going to steal them and they certainly weren’t going to get on fire — who’d have thought that a 1 in 10,000 chance of a tornado could hit Stable View?

Before and after photos: 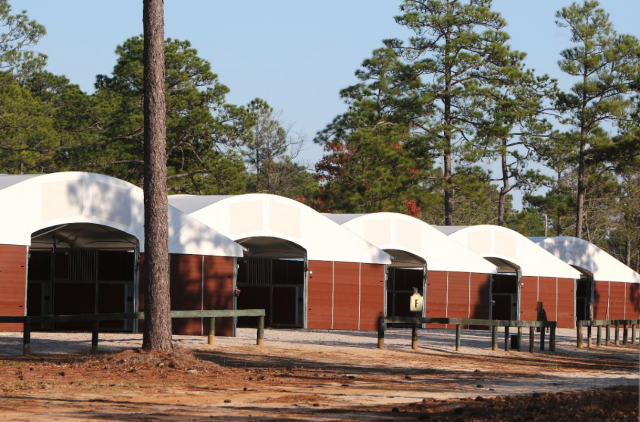 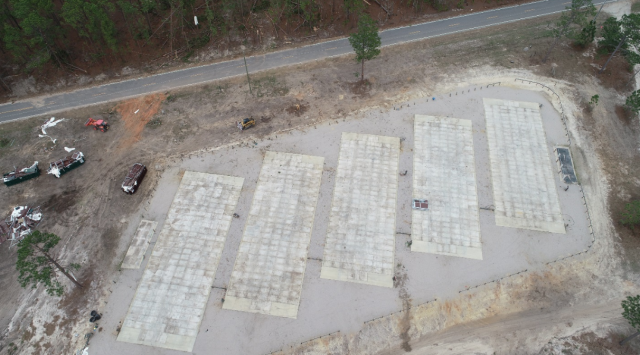 Anyway, we made some decisions: Get the grounds crew to get on with what they know best — they can concentrate on setting up the dressage show for tomorrow and Sunday. Get the guys who can drive the front loaders, the stump pullers and use the chain saws to work their magic and, let volunteers and neighbors, not to mention a few friends, do what they are best at, using their time in a manner that’s best suited to their skill set. This army of people, which at one point was over 30, at the end of the first day had achieved what I would have hoped we would have achieved at the end of the weekend — two days later.

On Friday, you could say we invested, we made very real progress, little of which will be covered by insurance. But the bottom line is that we’ve now got a real foundation on which to build over the next few days as we get Stable View back to where it was — what we believe to be one of the preeminent equestrian training facilities in the U.S. 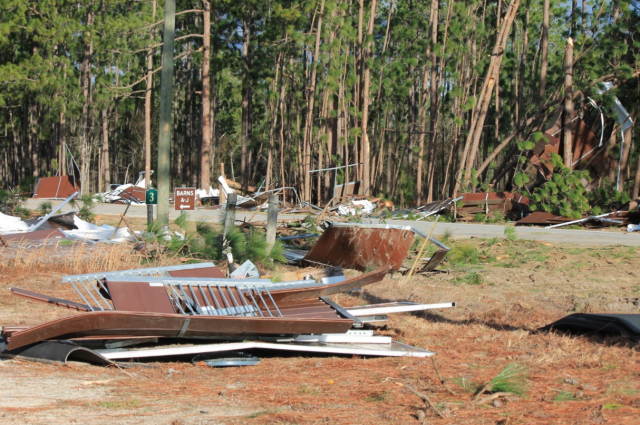 Saturday and Sunday will be an opportunity for us to move from clearing the stalls area along Springfield Church Road to the cross country course. This will not be a simple task. Debris is spilled over a large area and there are so many trees down that it will take a week to cut them down, cut them into pieces, pick them up and pile them up. In addition once collected all of the branches will need to be removed and burnt.

One repair that was completed was to the new rider lounge — this was hit by a tree but it’s now repaired and good as it was before the tornado. It’s ready to receive a coat of paint and, after some additional work, be ready for the March Designer Builders CCI-S 1*, 2*, 3* and 4*.

On not such a good note, we’ve just been told that four out of five Red Cockaded Woodpecker cavities that we inserted last year — into one of three clusters — were in trees that had been severely damaged (they are on the ground) in the tornado. The Dressage Show went off without a glitch — 140 horses showed over two days and if it wasn’t for the mess on an adjacent part of the property, they would not have known what was going on behind the scenes.

It’s now Monday, and we have around 100 12’ logs ready to be turned into cross country jumps. 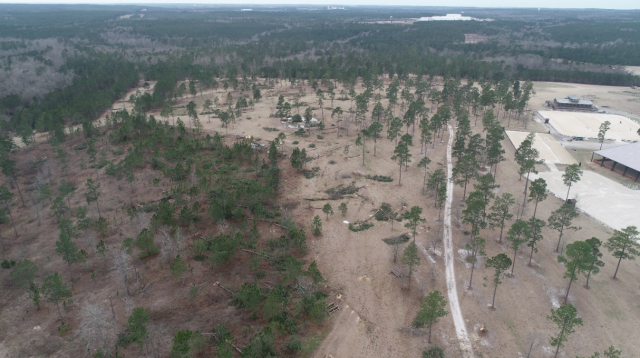 We’ve just about cleared the other side of Springfield Church Road. Now it’s on to finding out how damaged the utilities surrounding the pads where the stalls were. Meanwhile, volunteers arrive to assist and the chain saws are working overtime.

The enormity of the situation is now beginning to dawn.

While it’s possible to set deadlines and to try to motivate colleagues, friends and volunteers, there comes a point at which you realize yourself that you’re just looking at trees or damaged equipment and not actually working … I guess this is just “shock.”

Fortunately “well wishers“ are great motivators — each evening Cyndy and I compare notes regarding who has phoned, emailed us or offered their assistance. Those “contacts” have kept us going.

It’s now Tuesday, and the office is functioning normally. The Eventing Academy is scheduled for Presidents Day, and today is when we can really focus for the first time on the potential debris strewn across the cross county course.

If there is a day when we can begin to see ourselves in control of this mini-disaster, this is it. There’s an opportunity to see a light at the end of the tunnel.

Last night we left Stable View for the first time — we went out to dinner. 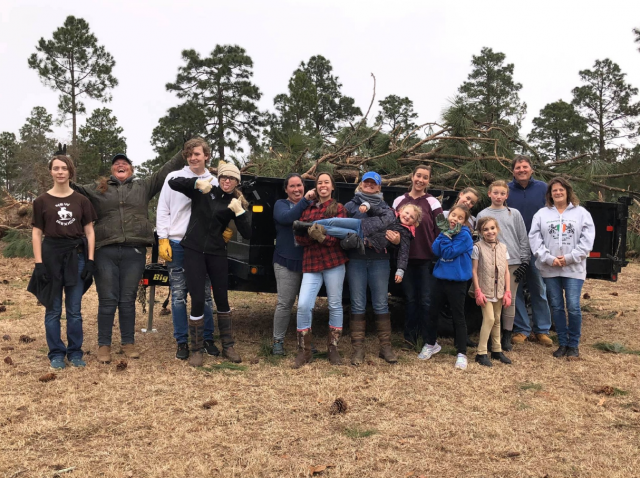 This project we’ve embarked on a few years ago has evolved, in a very short time, into a community. The support we’ve received over these last few days has been remarkable and we would not be where we are now without it.

Our forthcoming Designer Builders CCI-S 1*, 2*, 3* and 4* will be the event when we will celebrate the Tornado. We’re going to have a Tornado Jump, and we are also going to introduce the Tornado Cup. Rather than this be a piece of silverware, it will be a beverage.

By the end of this week Stable View will be back to normal. Apart from missing 100 stalls and 60 majestic longleaf pines, you wouldn’t even know that according to the National Weather Service, we had an EF-1 Tornado with wind speeds of 105 mph through a part of the property.

Fortunately humans and horses were spared. I wouldn’t want to even think about what would have happened if the tornado had been 200 yards north of where it did its work.