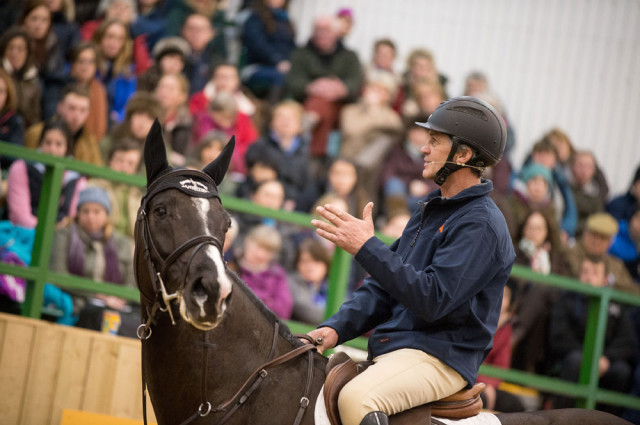 Without doubt Andrew Nicholson is one of the greatest cross country riders of all time and any opportunity to learn how he achieves his extraordinary results should be treasured. At last year’s International Eventing Forum, Andrew began his session on jumping exercises for cross country preparation with these general thoughts:

With each horse he did a series of what I would describe as “hunting” or “fifth leg” exercises, what Andrew described as “quick thinking” exercises. The sort of exercises that would substitute for the type of jumping that is often required out hunting:

I was delighted to see this, as without doubt these exercises are vital in the preparation of a horses that will look after their riders across country, taking responsibility for making small adjustments and keeping themselves, and therefore also their riders, safe.

If you are as old as I am, there is a certain déjà vu about a circle of four small (60 to 80 centimeters or 1’9″ to 2’6″) fences with three, four or five strides between each fence being shown at a conference. (Distance from the centre of the circle to the middle of each fence is 10 yards or 9.15 meters.

It was something that Dick Stillwell, the British trainer who produced most of Richard Meade’s horses, used regularly in the 60s and 70s, and even Rodrigo Pessoa used with show jumping students. That does not make it any less valuable of course, and probably it is even more valuable in the modern era with an increased number of tight curving lines between fences.

What is interesting though is that Andrew prefers initially jumping off a turn with his young horses rather than going straight down a grid. He finds it easier to soften the horses off a turn or circle, and I suspect it also ensures each horse strengthens their weaker side and weaker hind leg so that when he begins to jump a grid they are straight and take off with their hind legs together as a matching pair.

Andrew just used single horizontal poles on each fence to keep it simple: “Single poles because they get into less trouble if things go wrong, avoiding too many loose poles, and it allows the horses to learn to get very close to the fence and deal with problems. The circle is good because I can move in or out. Therefore don’t use cross poles with young horses. If they go disunited just keep going.”

The key point of the exercise was to leave as much as possible to the horse. However without doubt Andrew made this exercise look easy because he consistently kept the right canter and line. When he alternated between first five and then four strides it was obvious to see the level of partnership and how Andrew’s aim of eliminating extravagant jumping had been achieved.

All the horses did this exercise very easily with the exception of Zacarias, whose size and slightly flat canter made the exercise quite testing, particularly on the right rein.

After the circle exercise Andrew moved to a use of a slalom line, with continual changes of direction and a logical progression, in the same way that in dressage one might go from circles to a serpentine. All the horses coped very easily with this despite some fences being very close together and were obviously learning to look ahead and think ahead.

A balance to the “quick thinking” exercises was provided by a grid, coming out of canter, using a vertical to a cross pole to a vertical and then oxer, all on standard distances and at a slightly bigger size than with the other exercises. Andrew likes to put a small challenge in each grid, so there is added value, and tends to keep all the fences in the grid of a more similar size than is often seen.

Andrew jumped some larger fences on each horse, both oxers and verticals. He made the oxers square, with a ground line in line with the front pole, to encourage a better shape, but when jumping larger verticals he used a pulled out ground line, as with most modern trainers.

In relation to ground lines I recently read Mary King’s account of her show jumping warm up at the World Equestrian Games at The Hague in 1994. She was riding King William, who almost always produced a wonderful dressage and cross country performance but was rarely clean in the show jumping.

King William was going badly in the warm up, jumping without any confidence, but British show jumping legend David Broome was watching and jumped in to help. “He gave him a vertical with a really big ground line,” said Mary. “This restored his confidence and he went in and jumped well, with just two down instead of the normal five or six fences, sufficient to win the team gold medal.”

Beware! As with all exercises shown by high-level riders and trainers such as Andrew, a word of warning is advised. They are not necessarily using exercises a coach would use as safe exercises for lower level riders on comparable or less talented horses. Do not copy everything you see and hear because depending on the circumstances it might lead you astray!

I admire Andrew’s work greatly, and his training exercises are great to use with medium and advanced level riders, but the more novice rider and trainer should not seek to follow precisely in his footsteps to begin with. For example:

Andrew Nicholson on Song: A Rare Behind-the-Scenes Look at His Program

Christoph Hess on Working with the ‘Not So Good’ Dressage Horse