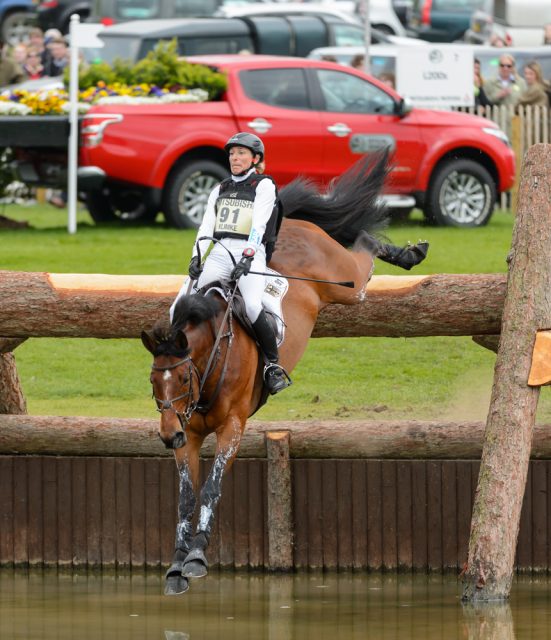 At the conclusion of a grueling day, Ingrid Klimke and Horseware Hale Bob are our leaders, balancing brilliance with a few sticky moments to come home clear with 3.2 time penalties, which moved them from second place to lead on 39.6. 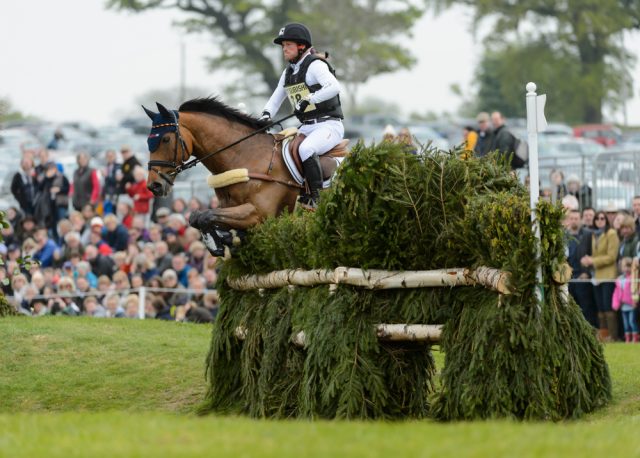 That’s just 0.4 points in front of defending winners Michael Jung and La Biosthetique Sam FBW, who put in a foot-perfect round to move from ninth after dressage up to second place on 40.0. (Michael also carried Wilberry Wonder Pony on his back to raise awareness for bone cancer. To say it was an emotional day here at Badminton is an understatement.)

Andrew Nicholson and Nereo, the final pair on course today, jumped clear with 2.4 time penalties to move from equal fifth up to third place on 40.4. Just 0.8 time penalties separate the entire top three, setting the stage for a nail-biting show jumping finale tomorrow. 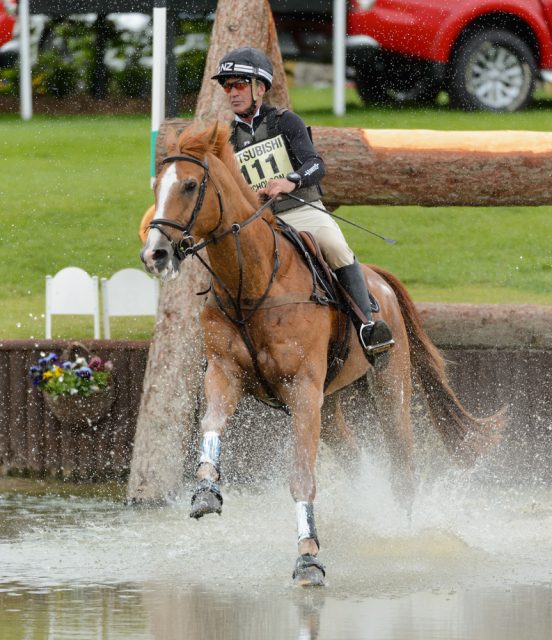 Tim Price and Xavier Faer were the only other combination in the 81-horse field to make the optimum time of 11 minutes, 34 seconds to climb from 34th place after the first phase to fourth place on 48.2.

Three Brits sit inside the top 10 after cross country, with Ros Canter and Allstar B leading the way with 9.6 time penalties for sixth on 54.5. Oliver Townend and ODT Ghareeb jumped clear with 5.2 time penalties — one of the faster rounds of the day — to sit seventh on 56.2. Alexander Bragg and Zagreb, who went early on in the order of go, had 12.4 time penalties to sit eighth on 57.0.

Rounding out the top 10 are Yoshiaki Oiwa and The Duke of Cavan, who is a total cross country machine and gave us one of the most thrilling rounds of the day. They added 15.6 time penalties to their dressage score to sit 10th on 58.2. 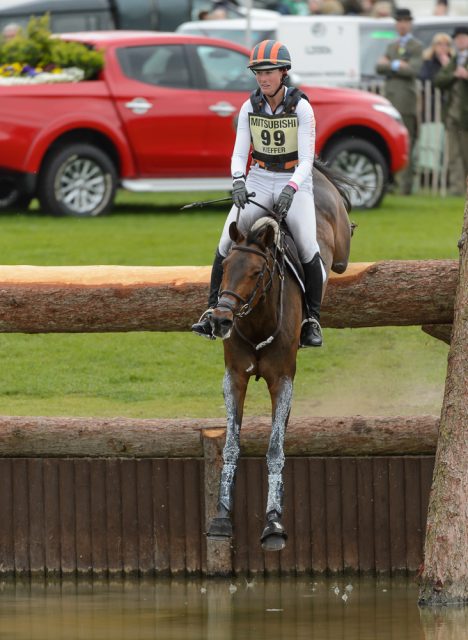 Looking to our North American contingent, it was truly a day of high highs and low lows, with two of our seven combinations making it to the finish. Lauren Kieffer and Team Rebecca’s Veronica are 17th after adding 29.2 time penalties in a steady round.

Lynn Symansky and the Donner Syndicate’s Donner are 24th with 30.8 time penalties — playing it safe by going at a slower pace due to Donner losing a shoe at fence 4. Stay tuned for interviews with both Lauren and Lynn in our press conference report. 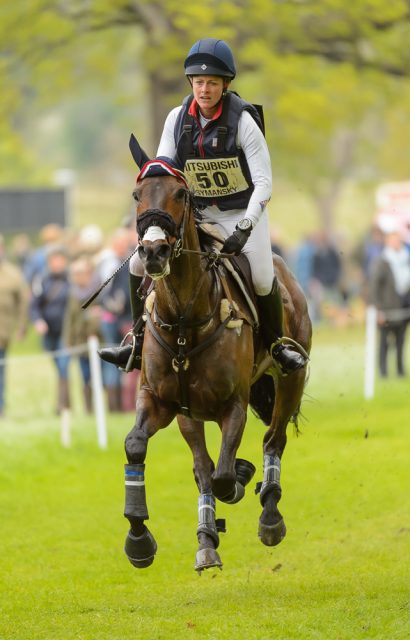 As the first out of the startbox, Lauren Kieffer retired Landmark’s Monte Carlo after a refusal at fence 19, the PHEV Corral; they were also carrying an additional 20 jumping penalties from 17B at the Mirage Pond.

Hannah Sue Burnett and Jacqueline Mars’ Harbour Pilot retired on course after glancing off the angled hedge at 8C coming out of The Lake. Katherine Coleman and her own Longwood also had a refusal at The Lake and then fell at fence 9, the Offset Oxer. EN confirmed that both Katherine and Longwood are OK after their fall.

Kathryn Robinson and Let It Bee fell after The Lake when the horse slipped on the flat as they were turning — a huge bummer of a way to end their Badminton.

Elisa Wallace fell from a visibly exhausted Simply Priceless at the final fence on course when he stumbled on landing. She has since received a yellow card under FEI article 526.1, Abuse of the horse. Wallace Eventing clarified to EN that the yellow card was specifically given for “riding an exhausted horse” (subpoint B under article 526.1 in the 2017 FEI Rulebook).

Elisa posted the following statement on her Facebook page:

“Johnny is very happy munching his hay. I am okay as well, but I’m disappointed in myself for letting down my horse, my country, and my sport. I should have pulled him up. And I agree with the ground jury giving me a yellow card. I made a mistake that I will NEVER make again. I am lucky we are both unscathed. Johnny gave me everything today. I love my horse and my sport.”

Looking at the cross country fence analysis shows that the problems were spread throughout the course. Overnight leaders Chris Burton and Graf Liberty picked up 20 jumping penalties at fence 15, the Hildon Water Pond, to end their quest for victory.

Shanghai Joe galloped back to stabling after Shane Rose fell and injured a forelimb when he slipped on a gravel path. He was stabilized by an orthopedic specialist at Badminton’s veterinary center before being transferred to Breadstone Veterinary Hospital for further treatment.

All other horses and riders involved in falls have been reported as OK. We will continue to bring you the latest news and wish all the very best to Emily Gilruth and Shanghai Joe.

We still have much more to bring you from Badminton, includes quotes from the top three, Lauren Kieffer and Lynn Symansky, and many other riders. Catch up on all of the cross country action in EN’s open thread and stay tuned for much more.

This report has been updated to include additional information provided by Wallace Eventing regarding Elisa Wallace’s yellow card. 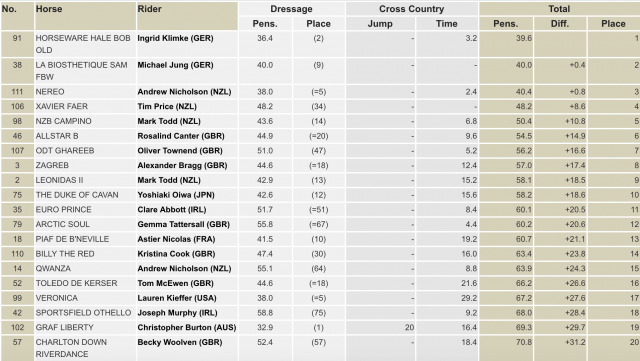