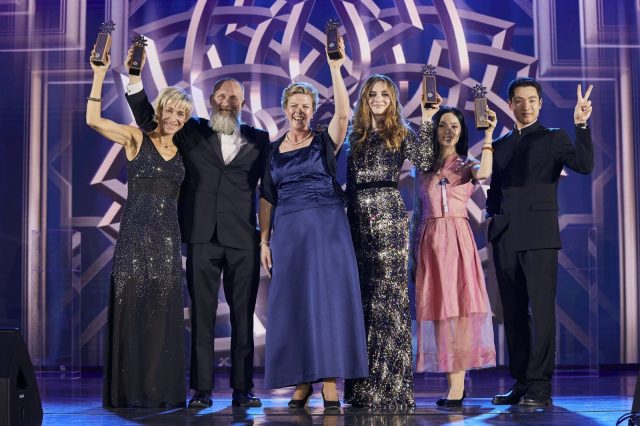 The glittering gala awards ceremony, which took place in the splendid surrounds of the Kremlin State Palace in the Russian capital, was attended by more than 400 distinguished guests, including top sporting legends, National Federations, FEI partners and stakeholders.

Tonight’s award is the latest in a series of accolades for German Eventing legend Klimke, who was also nominated for the Best Athlete honour in 2015 and 2017. Klimke received the award from Peden Bloodstock’s Managing Director Martin Atock.

In September, the 51-year-old successfully defended her title at the Longines FEI Eventing European Championships on home turf in Luhmühlen with SAP Hale Bob OLD, becoming only the second person in European history to win back-to-back titles on the same horse. Klimke’s stunning performance in Luhmühlen also led Germany to team gold.

“To win the Longines FEI Rising Star Award it’s really special for me as it sums up this year perfectly,” Rothenberger said. “What makes it really special is that my brother has won it before. So now we’ve got two people in this family who’ve won the Rising Star award. That just makes me very, very happy. My future goal, after following in the footsteps of my brother, is to compete in the Olympic Games. Now that’s a very big goal but it would be a nice thing to work towards.”

Rothenberger received her award from Longines Vice President of Marketing Matthieu Baumgartner. “This award celebrates youth, talent, determination and the stars of tomorrow,” Baumgartner said. “The work ethic and drive that you see in rising stars like Semmieke is closely aligned with our brand values and one of the main reasons why Longines supports this award. We are proud to be part of this journey in such a talented young athlete’s life.”

The Cavalor FEI Best Groom Award was presented to Madeleine Broek (NED) in recognition of her tireless efforts behind the scenes for Dutch Olympian and Jumping star Marc Houtzager. The award, presented by Cavalor’s Founder and Managing Director Peter Bollen, is given each year to grooms who work behind the scenes providing the best possible care for their equine athletes.

This year’s FEI Solidarity Award went to Uno Yxklinten (SWE), the Educational Leader of the first Farriers’ training programme in Zambia, set up with the aim of increasing the know-how of farriers in order to improve the well-being of horses in the African country.

Presented by Russian National Federation President Marina Sechina, the award is given each year to an equestrian development project or an individual or organisation that has demonstrated skill, dedication and energy in expanding equestrian sport. “Winning the FEI Solidarity Award 2019 is of course something big,” Yxklinten said. “I’m humbled and I’m so happy that we actually got this prize. It makes a difference in Zambia for many people.”

Taking the FEI Against All Odds Award was Zhenqiang Li (CHN) who started riding at the age of 27 and became a professional athlete just two years later. He was the first Chinese equestrian athlete to obtain the minimum eligibility requirements for the Beijing 2008 Olympic Games. Sadly, in 2009, his horse Jumpy passed away from cancer leaving Zhenqiang without his beloved equine partner and in financial trouble. Zhenqiang recovered from those difficult times, setting up an equestrian centre in Guangzhou.

“I hope that other Chinese riders will now follow the title of this award, Against All Odds, to work together to overcome the challenges of developing Chinese equestrianism,” Li said. “Thank you to the FEI for supporting the sport in China and for all the people who voted for me at home and abroad. Your support and encouragement will inspire other Chinese riders to reach their goals.”

FEI Secretary General Sabrina Ibáñez presented the award to Li’s children Yaofeng Li and Zuxian Li who were in the Russian capital on their father’s behalf. Zhenqiang Li competed with his son Yoafeng Li, a former Youth Olympic Games athlete, to earn China’s qualification earlier this year for the Tokyo 2020 Olympic Games.

The FEI Against All Odds Award is for someone who has pursued their equestrian ambitions despite a physical handicap or extremely difficult personal circumstances.

“Each year we receive a high calibre of nominees for the FEI Awards,” FEI President Ingmar De Vos said. “Our winners this evening are perfect examples of the excellence, commitment, dedication and courage that are required in equestrian sport.

“When my predecessor HRH Princess Haya introduced these awards 11 years ago, our hope was to celebrate not just sporting achievement but also the unsung champions of our sport. This evening’s winners have inspired everyone at tonight’s gala here in Moscow as well as a new generation of athletes who need heroes to emulate.”

The winners of the five awards were decided by combining 50% of a public vote and 50% of the judges’ vote for the final result. There were 130,000 online votes cast this year for the nominees.