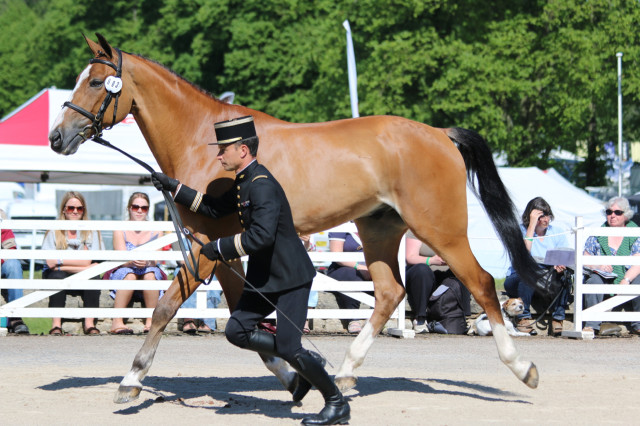 The French Equestrian Team had a banner year at the Rio Olympics and has generally been leaving their mark on the sport of eventing in a big way in 2016. They took home the team gold and an individual silver for Astier Nicolas in eventing, and also a second team gold in show jumping.

Among the strong performances which secured victory for France was Lieutenant Colonel Thibaut Vallette and Qing du Briot ENE HN, a 12-year-old Selle Francais gelding owned by the French Institute of Riding and Equitation at Saumur. Both Thibaut and Qing are products of the Institute and represent their elite performance and instruction team, the Cadre Noir. Thibaut is now an instructor at the Cadre Noir, and also wears the team’s signature namesake colors of black and gold when he’s on course, making for a rather striking pair. (The exception to this is when a member of the Cadre Noir is representing France in a team event, such as the Olympics.)

The French Institute of Riding and Equitation (also known as the Saumur Cavalry School) has been the epicenter of training French officers and civilians the highest levels of horsemanship since the early 1700s when François Robichon de La Guérinière was appointed King Louis XIV’s Equerry or chief cavalry administrator. If you’ve ever cursed your struggles with the shoulder-in,  Guérinière is your scapegoat, as it was he to developed the movement, calling it the “alpha and omega of all exercises.” He supposedly also coined flying changes and counter-canters.

The school flourished and become one of a handful of world-class cavalry centers before the rapid decline of horses in the military near the end of World War II. While many national cavalry programs evaporated in this era, “The government of the time could not bring itself to eliminate something which had become a real living heritage for France with the passage of time.” As they put it on their website.

Since then, the training center has become a place for both military and civilian equestrians to achieve complete precision in a number of disciplines. In the early 1970s the Cadre Noir shifted from strictly representing the military to a nationwide host of the elite, regardless of military status. Only those who have mastered their skill could have a teaching post at the Cadre Noir. They also have a group of performers who put on a spectacle of a show that makes the rounds on the internet with some regularity.

Thibaut made his way into the Cadre Noir in the more traditional fashion by way of military service. He began riding when he was five and enjoyed horses all his life, but military life had his attentions divided for many years before he was able to make his way to the cavalry permanently. In 2002 he joined the Military Riding Center at Fontainbleau and began his career in eventing in earnest. 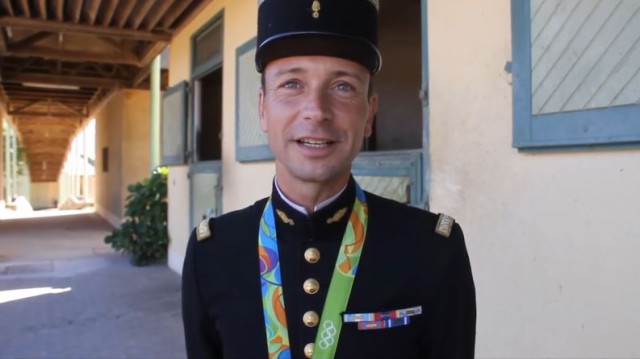 (If you speak french, you can watch this very sweet interview with Thibaut after his win in Rio.)

He bounced around in various positions and internships at France’s cavalry schools until 2009, when he joined the Cadre Noir’s elite staff. Two years later began his journey with Qing du Briot, bringing the school-owned cavalry horse up the levels thoughtfully.

In 2015, Lt. Col. Thibaut and Qing du Briot were part of the Bronze medal-winning team in the European Eventing Championships at Blair Castle, qualifying France for the Rio Olympics. This in addition to a third-place finish at Fontainbleau CICO3* and runner-up at Chatsworth in the CIC3* in May made including Thibaut and Qing on the Olympic squad an obvious choice.

The two put in a clutch performance for Team France in Rio by earning a 41.0 in dressage, adding 24 time faults in cross country on a day where they could not afford a second stop (Karim Laghouag and Entebbe were the drop score that day), and was double-clear in show jumping for a resounding team victory. The combination also finished 13th individually.

Naturally, upon his arrival home, Thibaut was given a hero’s welcome back to Cadre Noir with a ceremony which not only impresses with pomp and circumstance, but also yet again demonstrates the remarkable horses developed at Saumur with jets overhead.

It’s another tremendous feather in the cap of the Cadre Noir, who also put forth a winning teammate in France’s 2004 gold medalist team in Athens, Didier Courreges and his own Debat d’Estruval. But as far as we can tell, Qing du Briot ENE HN is the first horse owned by a military school to win gold at the Olympic Games since 1968*. In the first half of the century this was a more common affair, making Qing a particular sort of sentimental throwback to a bygone era of eventing horsemanship and history.

You can learn much more about the Cadre Noir on their website (much of which is available in English) and if you ever make your way to the Loire Valley in France, you can take a tour of the riding institute and see them perform on-site. (It’s gotten incredible reviews on Trip Advisor – it’s a must stop in our book)

*Update – Thanks to Pedro Gutiérrez Aja who was able to provide some additional insight on the last military-owned horse to earn a gold medal at the Olympics – Pitou, ridden by Jean Jaques-Guyon was the last military horse to win in eventing. Coincidentally, this pair were also from France! Many thanks for the insight, Pedro.