We were able to catch up with Robert Piro, who won the Training Three-Day division at GMHA last weekend. Robert had some wonderful things to say about his experiences. Many thanks to Robert for taking the time to chat with us! 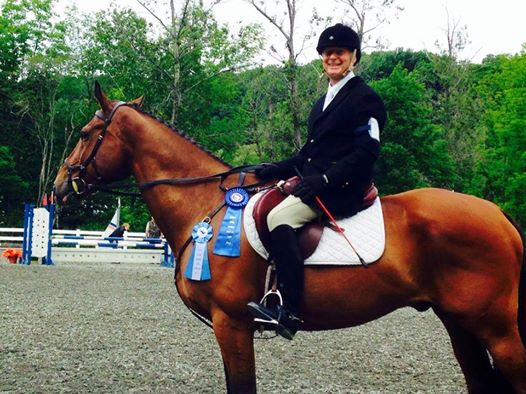 Lila: How old are you and where are you from?

Robert: “I’m 63 years old and currently live in Norwich, VT. I grew up on Long Island, NY spent most of my adult life in and around Boston. My wife, Mary, and I had a horse farm in Acton, MA for 14 years before moving to our farm in Norwich.”

Lila: What is your background with horses? Did you grow up riding horses?

Robert: “I started riding when I was 43. I hadn’t ridden before then. My wife had returned to a childhood passion for riding and my two daughters (then 5 & 7) had joined her soon thereafter. I would come home from work and they would be at the local barn, so I wouldn’t see them until later. I decided to join them in the insanity. Then we decided to get Mary a horse and the girls at least one pony and that led to getting our farm in Acton. Stephie Baer was our original trainer, so we naturally gravitated to eventing.”

Lila: How long have you been eventing?

Robert: “I started eventing a couple of years later, so about 18 years.”

Lila: Tell us about your current horse? Breed, age, personality…how long you have had him/her?

Robert: “My current horse is Waterview, barn name Duffy. He is a 16 year old,16.3 hand Irish Sport Horse that I got from Fernhill (Carol Gee) on a trip to Ireland 4 years ago. He collicked 6 months after I got him and had surgery so I lost a year bringing him back. He is a wonderful horse, quite sane, and very, very smart.”

Lila: Have you ever competed in a long format?

Lila: What made you decide to do the training three day this year at GMHA?

Robert: “It’s been one of my goals for a long time.”

Lila: What was it like preparing for this training three day?

Robert: “Having done it two years ago, and with advice from our trainer, Jane Hamlin, I started a conditioning program about six weeks before the event with trot sets and gallop sets around our fields. I actually enjoy that part. The toughest part was learning the special 3 day dressage test in the large arena and thinking I had to sit the trot for the whole test. We were only told of the misprint about sitting a few days before the event. Duffy has big gaits, so is not easy to sit. I could do it but I have to slow him down and lose impulsion.”

Lila: Tell us about your overall experience at the three day, from dressage to show jumping and everything in-between?

Robert: “I was pleased with my dressage – not perfect – but liked by at least one judge- especially considering the galloping and bellowing cows right next to me. On endurance day – Duffs favorite stuff- he was perfect. He has a big trot stride so he glides along on roads and tracks and easily made the time in A and C.”

“The most fun of course, is steeplechase as Duffy has a huge gallop and is very comfortable jumping the brush out of stride. Plus it’s something you don’t get to do much anymore. On cross country, he was also terrific, although a lot more subdued at the start then is typical at a regular horse trials.”

“We ran a little under pace for the first five or six jumps but then picked it up after that. We finished four seconds over optimum time and so moved into 2nd after endurance day.” 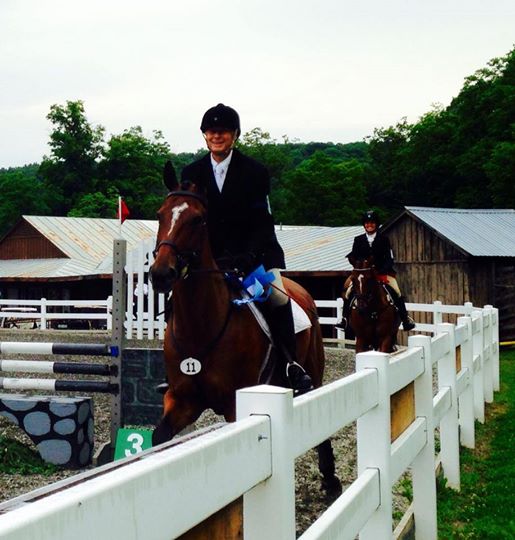 Lila: Did you ever imagine winning this event? How excited were you at the end?

Robert: “Since we were third in the Novice Three Day and done okay at Training horse trials, I had hopes of doing well, although had doubts about my ability to hold it together through all the pieces. Duffy is certainly capable of doing it so it was really in my court. I was ecstatic when it all came together. It was really a nail biter.”

Lila: What are your eventing plans for the future? Will you try the three day again next year?

Robert: “I plan to do a couple more Training horse trials this year and might even consider a move-up Prelim event. I never, in my wildest dreams, thought I would be considering that! And it makes my wife crazy at the thought of my going Prelim.”

Lila: Why would you recommend this event?

Robert: “It’s a rare opportunity to compete in a different sport from a horse trials and experience all the parts. Steeplechase is particularly fun and gives you a lot of training at jumping out of stride that you still can do in parts of a horse trials cross country, but in which you may not feel confident. It also creates a much stronger bond between you and your equine partner and you develop much more of a sense of how they are feeling and responding.”

Lila: Even though the long format has nearly vanished, what skills have you and your horse acquired and what have learned overall from this experience?

Robert: “In addition to steeplechase I think I learned much more about lengthening and shortening my horse between phases. In that regard, the traditional order of dressage, cross country, and stadium is the most challenging because you need to collect, then open up your horse, and then collect them again on the third day when they can be either tired and stiff, or still fired up for more cross country.”

From Robert: “Thanks to GMHA continuing to host this fabulous event! I  wish to report that the courses were beautiful and everything ran on time! Kudos to Molly and Janine! And many thanks to Bonnie, Ashley, Eileen, Fran, Jimmy, Denny, Eric, Mary H. and all of the legions of volunteers that made this possible. To all of you who ran off to Millbrook – eat your hearts out- this is a rare opportunity. I hope many of you will get to experience this next time.

I also want to thank Jane Hamlin for all her patient coaching and Lauren Mair and Anna Loschiavo for their help at the event and Cristin Roby and David Roby, too. And last but not least my long suffering and patient wife Mary. “

Videos of Robert and Waterview here, taken by David Roby!