On Monday, Aug 10th, Iowans from Council Bluffs to Davenport received a Severe Thunderstorm Warning. Not an uncommon occurrence in the state of Iowa, but none of us knew what we were really facing. After weathering the storm for almost two hours, it became clear that this was no thunderstorm. Days later, we discovered that we were hit with what’s called a Derecho, or a “long-lived straight-line windstorm that is part of a line of powerful thunderstorms,” according to The Gazette. Sustained winds of 100+ mph in some areas decimated homes, barns, and crops. Nearly every home in the city of Cedar Rapids has damage of some kind. To learn more about the weather even itself, please see one of the articles posted below.

In addition to the damage to homes and businesses, the equestrian facilities in Central and Eastern Iowa were hit hard. Not only did most facilities have to operate without power for almost a week, meaning no water for most, but the damage to barns and buildings is widespread, extensive and heart-breaking. In addition to building damage, there is other facility damage such as downed trees, broken windows, jump damage, etc. While most barn owners I’ve spoken to are rolling up their sleeves and digging in, long insurance processes and a backup of building crews will keep these facilities from operating as normal for many months. At the time of writing, I had no reports of horse fatality, though I have heard of at least one serious injury.

Kari Washburn’s horse, Twist, was unfortunately hit by a lightning strike during the storm. He was found by the barn owner under a fence, covered in mud and flies. They thought Twist was already gone when he started moving a bit. He was unable to use his legs at all when he finally stood up. Due to downed trees, the local vet had to drive through a field in order to get to the injured horse. According to Washburn, “Twist is improving beautifully. He is very beat up and sore. We won’t know for a while if there will be any permanent damage. But all that matters is that my sweet boy is alive and functioning.” I had the pleasure of watching Washburn and Twist ride in a dressage clinic just a few weeks ago.

Tammy Lisi, owner of Tamarack Stables in Mechanicsville, IA, lost most of her property, including extensive damage to her home. Her covered arena collapsed, the dairy stall barn lost its entire hayloft and the storage barn was damaged to the point of levelling. Lisi recounted her experience immediately after the storm: “Came upstairs to the arena not having a roof, and, to my horror, the dairy barn where the horses are, not having a roof. Hay and debris is everywhere. Ran out in the wind and rain. Zeak (my husband’s horse) screams from his stall and I can see his face because the door is missing. He is fine! The chickens are all there and fine. The horses are wet, upset and fine. Then I check the outside horses. They are all fine. Huddling together and scared but fine.” 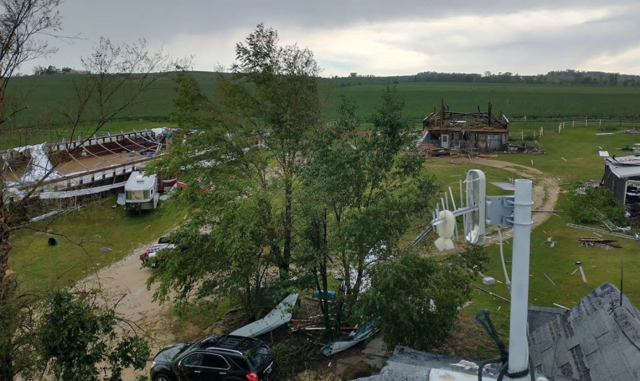 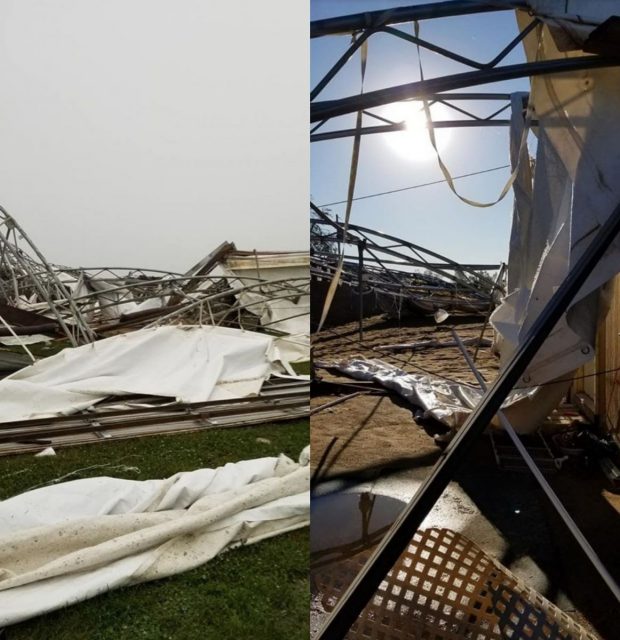 The horses on her property were miraculously unharmed, though Lisi stated her gratitude that the horses were not in the stalls in the covered barn when the storm hit. Lisi’s facility, while small, is one of the premier hosts to dressage shows in our little slice of Eastern Iowa. For years, Tamarack has hosted 3-4 schooling dressage shows in their beautiful outdoor arena. 2019 was the inaugural year for The Tamarack Classic, a recognized show. The 2020 Tamarack Classic was scheduled for August 15th, but had to be cancelled due to the damage. Volunteers have worked tirelessly over the past week to clean up debris and start the process of rebuilding. A Go Fund Me has been set up for Tamarack’s rebuilding process — you can donate here. We look forward to showing there again next year!

Many boarding and training facilities were also hit. Deb Johnson’s Northern Lights Farm in Mount Vernon, IA, suffered the collapse of their indoor arena, which is less than five years old. Northern Lights has really boomed as a training facility in the last few years, hosting regular clinics with FEI Dressage Trainer Anne Cizaldo. Deb is grateful for property insurance and wanted to stress the importance of proper insurance! 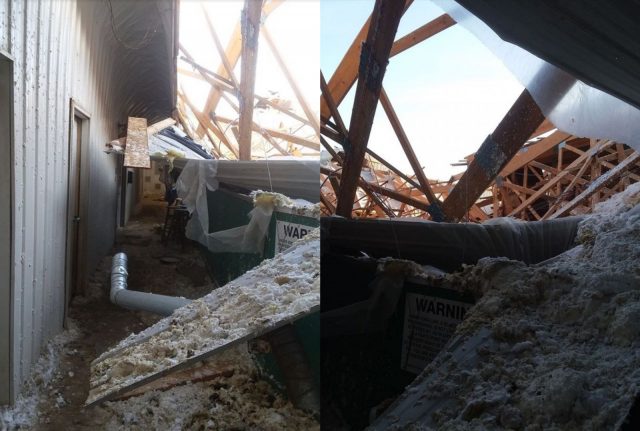 Boulder Creek Equestrian Center in Marion, IA, a multi-discipline boarding and training facility, also had their indoor arena roof collapse, along with losing parts of their stall barn roof. 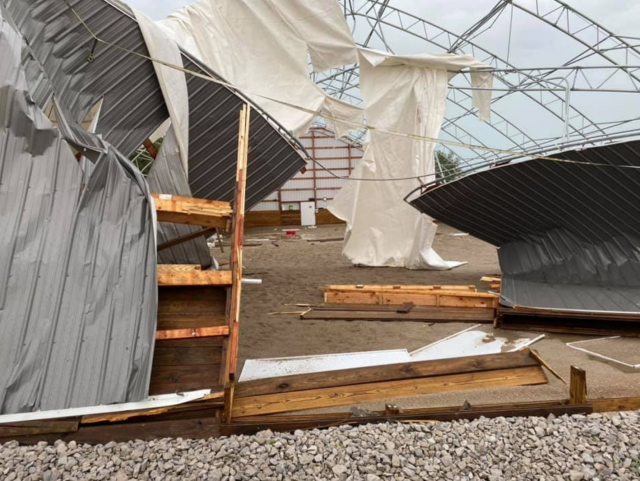 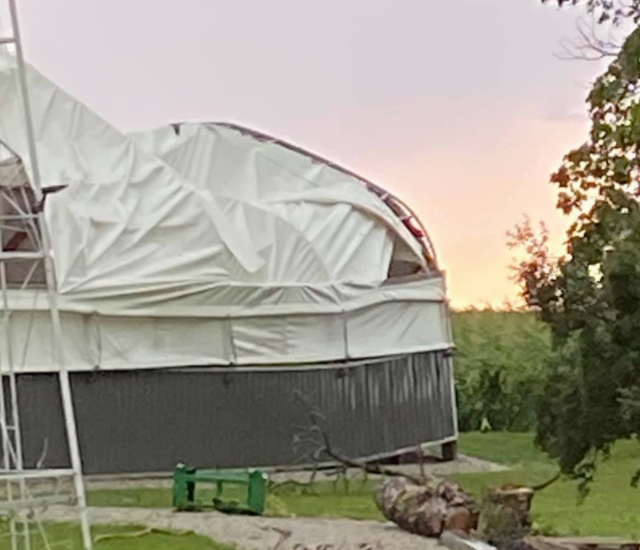 Camie Stockhausen’s Field Day eventing facility in Cambridge, IA, was also hit. Her covered arena was damaged, including a collapsed wall and torn cover. Stockhausen is an ICP Certified Eventing Instructor that trains and coaches throughout the Des Moines/Ames area of Iowa. She even recently made the trek to The Event at Rebecca Farms. 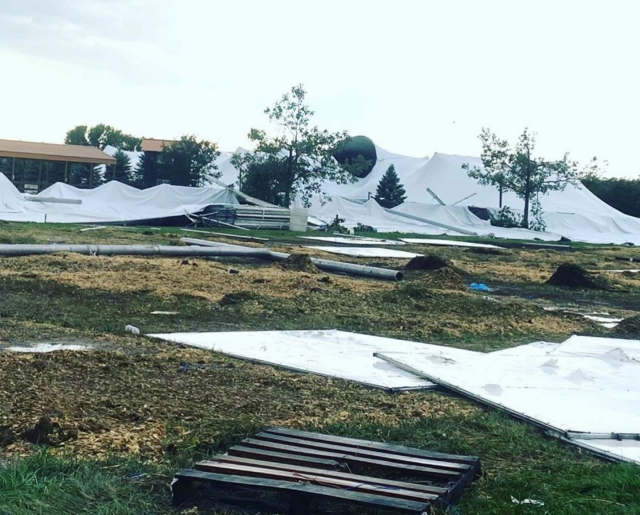 Maffitt Lake Equestrian Center in Cummings, IA, had just wrapped up its Two Rivers Summer Festival the day prior. They would have had over 120 horses on the property when the storm hit had the festival still been running. Maffitt Lake runs recognized USHJA, recognized USDF and a strong lineup of schooling shows throughout the year. The facility had damage to temporary stabling and barns throughout the property.

Catalpa Corner Horse Park, former home to the USEA Area IV Event, was lucky to come out with little to no damage to barns or jumps, but has a significant number of trees down and will have to clear the wooded area for the time being of any jumps.

Even the barn I board my own horse at, Oak Meadow Farm in Solon, IA, is dealing with the aftermath. While we were luckier than most, we had a shelter flip onto its top, several large trees down, including a few in our outdoor arena, damaged to fencing throughout the property and had to operate with no electricity or on-property water for almost a full week. Our barn was spared as was our indoor arena.

The majority of the cleanup has come from volunteer efforts, long days of hauling toppled trees, hauling water to horses, cleaning up building damage, etc. Lisi has been appreciative of the help: “The horse community is the best. They showed up and helped us in every way possible. From helping us cancel our USDF/USEF Level 1 dressage show which was supposed to be six days later, to making sure we got a dumpster and scrap metal picked up. They are making sure we have cold water, food, and toilet paper.”

While Iowa is not the epicenter of equestrian sports by a long shot, we have a strong and active group of riders in the area. Dedicated, hard-working, talented athletes that want nothing more than to continue their riding, training and showing. We would appreciate any support, even in the form of good vibes, for our community. Kick on, Iowa.

Information on the Derecho: