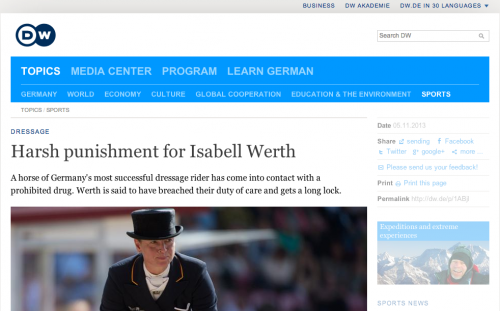 Jock Paget will enjoy a little time out of the limelight as the equestrian community turns its eyes to dressage rider Isabell Werth, who received a six-month suspension from the German Equestrian Federation when El Santo, her mount for the 2012 Rhineland Championships, tested positive for cimetidine. According to DW.de, the German Equestrian Federation labels cimetidine, which is used to treat stomach ulcers, as a forbidden substance and prohibited medication in competition; however, it is not considered a doping drug.

Interestingly, this suspension does not totally prevent Isabell from competing, as the ban comes from her home country’s federation and not the FEI. Provided she follows certain procedures, she’ll still be allowed to compete during the six-month suspension. In the meantime, Isabell plans to appeal, as she maintains her innocence, saying she believes the horse ingested the substance due to a problem with the watering system in her barn.

However, the German Equestrian Federation isn’t showing her any mercy. While the Board believes Isabell did not knowingly give her horse the drug, it also believes the horse ingested it by licking the stall bars of its next-door neighbor. The Board found “Isabell had neglected the duty of care in arranging their stable operation,” according to DW.de. She still has the chance to appeal, and in the meantime she’s paid a fine of 2000 Euros.

The “duty of care” argument is an interesting one, and it’s also been raised in Jock’s case. Many believe that even if Jock didn’t knowingly give Reserpine to Clifton Promise, it’s still his responsibility to ensure that his barn operates at the highest standards. Picking up the wrong bucket, using an incorrect mixing spoon or placing the wrong horses in neighboring stalls — as has been suggested in Isabell’s case — can mean total disaster when it comes to drug tests.

While many are labeling Isabell’s suspension as harsh punishment, it’s not surprising when you consider the German Equestrian Federation disbanded three of its national programs in 2009 following numerous doping scandals. And there’s no room for error in a zero-tolerance policy. It’s also worth noting Isabell received a six-month suspension from the FEI that same year when her horse Whisper tested positive for Fluphenazine at the CDI Wiesbaden in Germany.