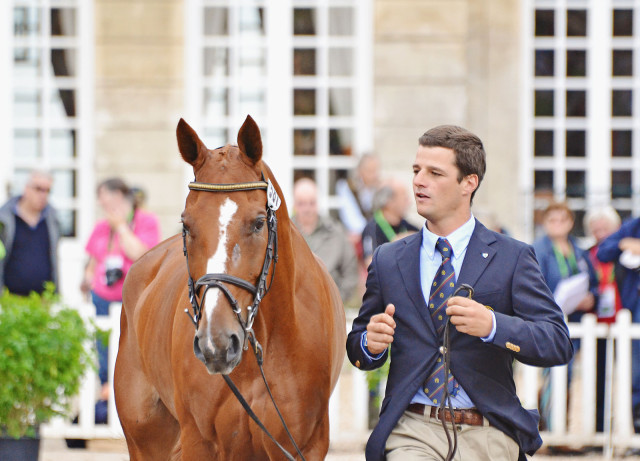 Francisco Seabra and Zarthago at WEG. Photo by Jenni Autry.

Following the ongoing debate about safety in eventing is not unlike being stuck on a carousel. Whenever a horse or human dies on cross country, the same cyclical series of events inevitably unfold.

Social media lights up with outraged comments from people asking why one more horse or human has to die while competing in this sport. Various organizations then release statements of condolence and commit to work toward bolstering safety. No real change actually takes place, and we all go back to the status quo, bracing for the next fatal accident.

It’s an infuriating reality that has gone on far too long and one for which there is currently no end in sight.

It’s been six months since Burghley and Blenheim, when there were eight total horse falls and one horse fatality between those two events alone. Ben Winter and Jordan McDonald died several months before that. We ran the following editorials after those events, and every single word is still applicable to where we are six months later:

Time to Start Asking the Tough Questions: “When we publish videos and photos of horse falls on Eventing Nation, readers leave comments saying they wish we would post a warning so they could know to look away or skip over that post. And while we respect that, the rest of the world isn’t looking away.”

Newsflash: Eventing Doesn’t Have To Be This Way: “Maybe we stay silent because we are scared to step on toes, maybe because we don’t believe we have the credibility to have a worthwhile opinion, maybe because we lack solutions to the issues we see. But it’s time to talk and to act.”

I do not have the answers for how to prevent or at least significantly lower the rate at which horses and riders are suffering serious injuries and dying on course, and, for that matter, we don’t even have an accurate picture of the rate at which these accidents are occurring.

I contacted the FEI last October asking for statistics on horse fatalities and injuries at FEI events. This is what I received in response: “The FEI Veterinary Department is currently working on horse injuries and fatalities statistics, however these are not available yet.”

The FEI publishes a comprehensive report on rider fatalities and injuries going back to 2004, yet there is no information currently available to the public — and perhaps not even compiled — on horses that suffer the same fate. That is extremely disconcerting.

The fact remains there is currently no comprehensive database for globally tracking fatalities and injuries for both horses and riders at non-FEI events around the world. Each national governing body tracks this information independently for their own events; the USEA just released a report going back to 2009 for rider injuries only. The FEI tracks the data for FEI events only.

Until there is some sort of global database to compile this information from the FEI and every national governing body, we have a very incomplete picture of horse and rider injuries and fatalities occurring around the world.

Horsetalk does publish a list, but it is not complete. In addition to the fatalities from 2015, there are three horse fatalities from recent years missing from the list: San Calido, broken leg, Osberton CCI* 2014; Happy Go Lucky, cardiac episode, Saumur CCI3* 2014; Visionary Patriarch, critical injuries, Poplar Place Prelim 2013. There are likely others missing.

If no one will cough up the cash to fund a study on something as simple as the safety of helmet cameras, I hold out little hope for any kind of comprehensive report or database that gives us an accurate picture of the sheer size and scope of this uphill battle we are facing worldwide.

But it is a battle that must be fought, and we refuse to stand idly by as the death toll continues to rise. One more fatality is simply one too many.

In just the last month since the 2015 eventing season started, we have lost Francisco Seabra in Spain, Dream Girl at Full Gallop, Conahy’s Courage at Red Hills and Cadiz at Fontainebleau. A number of media outlets have released commentary since, and if you haven’t yet read these links, please take the time to do so:

Deaths Are Not Acceptable, by Oliver Townend for Horse & Hound: “I struggle with how some riders react to fatalities — almost as if it’s expected. Deaths are not acceptable, they must never be the norm and we must examine every solution to eliminate them.”

Can Eventing Be Safer? Formula One Says It Can, by Lisa Slade for The Chronicle of the Horse: “I’d like to take ‘inherently dangerous’ out of the discussion about eventing for now. At this point, it’s just an excuse to not take a harder look at our sport.”

Save Eventing From Itself, by Denny Emerson for Horse Collaborative: “Bring in experts from car racing and ski racing, create strict protocols which trigger hearings after accidents of a certain severity, create protocols for changes of speed in case of rain or bad footing … “

EN will continue to link to any news articles and commentary that take a hard look at eventing. If we miss any, you can send them to [email protected]. We will also publish the continued findings from the USEA’s Cross Country Safety Task Force.

It is time to scrutinize every aspect of this sport. Upper-level riders: We implore you to follow Oliver Townend’s lead and speak out, ask the hard questions and let your voice be heard. EN will publish any guest commentary sent to us on how to improve safety in eventing.

David O’Connor once said we are “one sport.” Let us unite together now as one sport — professional riders, amateurs, officials, grooms, owners, fans, organizers, journalists and beyond — and tirelessly pursue the day when we never have to say goodbye to one more horse or rider on a cross country course.