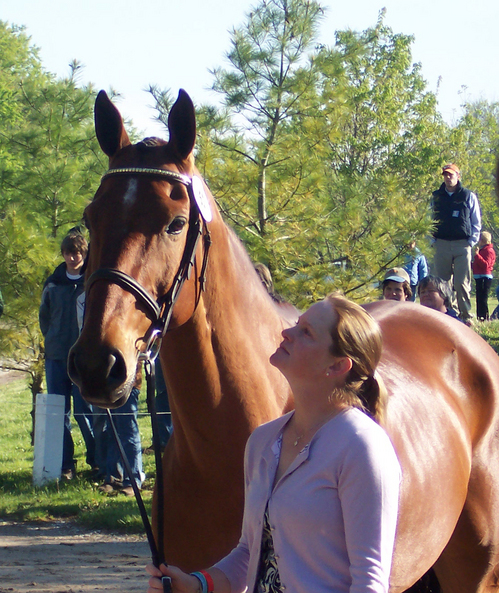 Winsome Adante
An almost legendary over-achiever: winner of the Rolex CCI**** three times, 3rd at Badminton, a WEG Team Gold, an Olympic Team Bronze and and and Olympic individual silver just to scratch the surface, and also one of the few horses to be successful at both long and short format – along with Primmore’s Pride and Tamarillo. (Brownie points if you can name any more, no prizes or mentions, it’s just for kicks!)  We’re thrilled to announce that we can send Mary a very special edition Breyer model of Dan, courtesy of his owner, Linda Wachtmeister and Plain Dealing Farm. It is a one of a kind deal and a keepsake to treasure forever, and we’re honoured to be able to give it away.  His rider, Kim Seversen kindly filled us in on how Dan spends his days now, and her fondest memories,
“Of course you can never take away those times going round Badminton and Rolex and whatnot, (!) but the thing I remember most about him is as he got older he got quirkier – he got more and more quirky about spooking and being silly the older he got! I think it was our partnership that made him so special, we had such a fantastic partnership.  I think Dan had more heart than most horses and that’s how he did what he did – he certainly wasn’t a specimen to look at, not one that you would have looked at as a premier event horse! I think it just came down to his heart. He’s not doing anything now, he is out in a field enjoying his time with his lady friends! I think he’s happy because when he was here and competing he always went out in a paddock on his own so I think he enjoys being able to be out with other horses. I do have dreams sometimes that I get to go over there (Plain Dealing Farm) and ride him, periodically I’ll be riding him, but I certainly dream about him plenty.”
The picture of Kim and Dan was taken by D.Lee, a now local artist living here in Lexington, and self-confessed EN junkie  – aren’t we all?! (she was the tail-gater in the 12 days of Christmas!) but hails from Arizona originally, 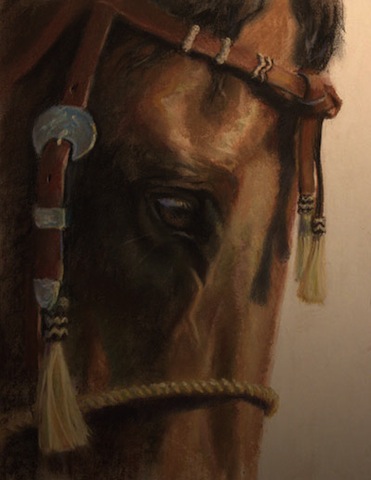 D’s OTTB Ace
“I got the photo of Dan before the jog, I think it was my first Rolex (I was lucky to capture that moment.) Tim (the best husband ever!) and I came to Rolex from Arizona in 2005.  I had never been to Kentucky, ever, and had always wanted to go. I had watched Jim McKay talk about Lexington once a year during Derby coverage since I was little (living in Idaho), and watched Rolex every year when PBS would show it back in the day.  I will never forget the first time driving here, seeing all the fences, seeing the KHP sign, driving into the HORSE PARK (hear the angels singing!).  We walked in from the campground, and …. there was the Head of the Lake.  I started crying. I couldn’t believe I was here.  I know it sounds dramatic, but it is true!  I said to Tim “Can we please live here??”   It took a year, but we sold the house in Arizona and bought a house on acreage here and made a little farm. (I told you he is the best!)
Last year at Rolex, I stood there the day before it started, and watched Karen O’Connor, Mark Todd and Mary King school on the flat in the same ring.  Seriously? Who’s life is this?  One year I took my horse and schooled xc the week after Rolex.  Me and my horse…. on hallowed ground.  Pretty amazing, I never take that for granted.

“Play Ball”
Painting….  has started taking over my life a little!  I was not one exposed to art, just me drawing horses as long as I can remember. I didn’t start really painting until I was almost thirty.  We lived about an hour from Jackson Hole at the time, and that is a great place to get exposed to some wonderful art.  It was an early goal of mine to be represented in a gallery there.  I am now represented by three galleries, one in Jackson, one in Sun Valley (Idaho) and one here in Lexington.  It’s been a long road, like anything.  It’s a lot like riding, it’s work. You have to love it enough to slog through the part where you suck, but there is always, always room to get better.  The journey of improvement  never ends.
My chosen subject is usually animals, because that is what I love the most.  I also am drawn to great light on about anything, that is usually what makes me want to paint something.   I enjoy switching it up from horses/dogs/cows, to wildlife.  I still love my mountains, and we go out west every year.  Someday we will spend more time out there, just not in the winter doing horse chores ever again!

We have five horses here, three OTTB’s and two homebreds.  I haven’t competed for a few years now, and that’s okay.  I have really come to love bringing along a baby, that’s probably my favorite thing now.  We have a coming four year old TB homebred I started last fall, and a 2yr old TBx, and a foal due in May.   For some reason I have a small herd!  Something will have to be for sale at some point, but I’ll think about that later.   I certainly don’t get to ride a horse as much as I ride the tractor, but there you go.  I love our little farm!  Well, except for the mud part.

One of the best parts about painting has turned out to be the people I have met and the places it has taken me that would have never happened without art.  Also, the ability to raise money with a donated piece which I would not have been able to do otherwise.   Whether it’s the humane society here, or the True Prospect Fire Recovery Fund, or others, it is so great to be able to do that.”

Many, many thanks to Kim Seversen, D.Lee, and to Linda Wachtmeister and Plain Dealing Farm who have extremely generously given their special edition Breyer model of Winsome Adante to be awarded to the first correct answer. (We will send that out to Mary as soon as possible if you’d like to email me at [email protected] with your address.) Thank you again for making this so special every week, and if you’d like to submit photos please send them to the same email above too. Go Eventing Nation!
0 0 votes
Article Rating
Subscribe
Login
Please login to comment
0 Comments
Inline Feedbacks
View all comments
More Insanity on Horse Nation >>