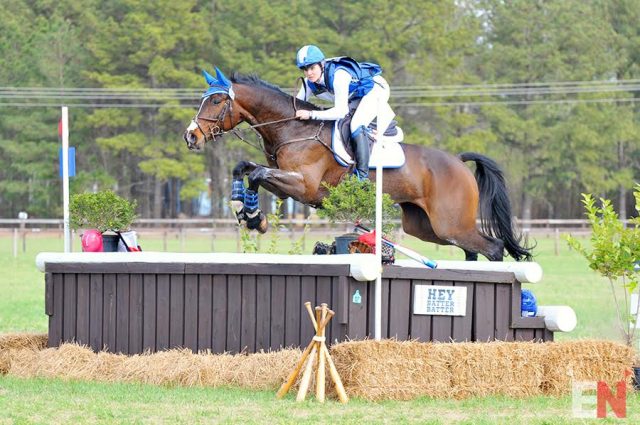 Jordan Linstedt is no rookie when it comes to the Kentucky Rolex Three-Day Event. She’s successfully competed there multiple times with different horses.

Her current mount, RevitaVet Capato, the 14-year-old Hanoverian owned by Jordan and her mom, Barbara Linstedt, is heading there with her for their third Rolex together. They were even featured on last year’s Rolex tickets! But that doesn’t mean getting there is easy. 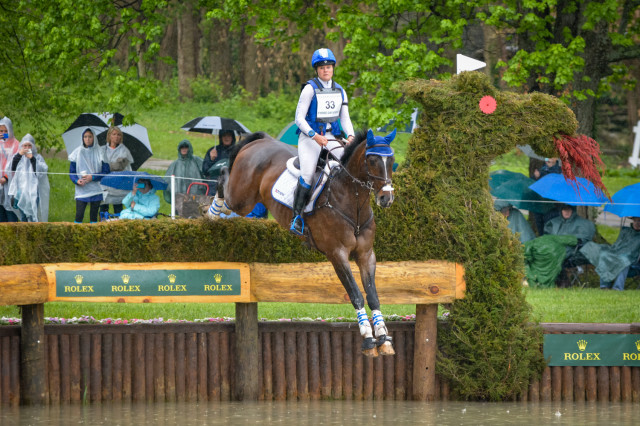 It Takes a Village

From #RolexRookie to seasoned competitor, getting to Rolex really does take a village, and a whole lot of support. Jordan is based in Redmond, Wash., which means traveling from coast to coast to get from where she’s based to Kentucky, and a lot of prep work to make it all happen. Recently I had a chance to catch up with Jordan on what it takes to get to Rolex, from the prep to the travel and of course actually competing there, and will be following her up through the event at the end of April.

First, she credits Neelie and Simon Floyd, who co-own Hawkwind Farm (Jordan’s home base), for being the foundation of her support. They helped host the fundraiser event to kick things off, and of course, help keep everything at the farm running. Jordan tells us that without them, she really couldn’t do any of this and is eternally grateful! 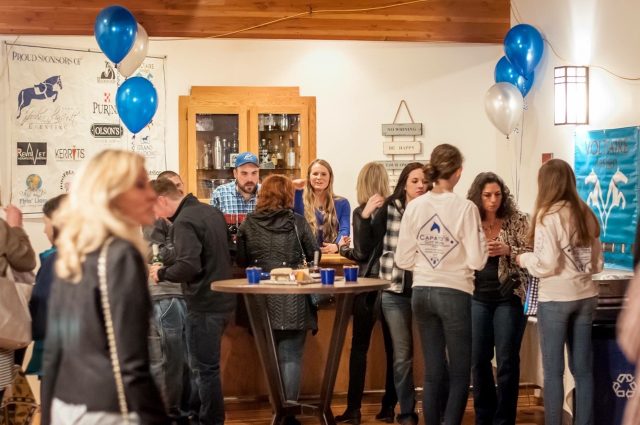 Starting back in early March, they held a fundraising event that included a live band, a huge silent auction and JLE Team gear as well as #CapatosGotHops shirts. The entire community–about 200 people in all–came out to support Jordan and Capato.

Jordan tells us, “I couldn’t do what I do without all the support. It’s very special to have so many incredible people that support my goals and dreams!” Brands and companies such as Olson’s Tack Shop, Voltaire Saddles, Kerrits, Samshield, Purina, Grand Meadows and so many other brands came together to help Jordan in her journey.

The hardest part about heading to Kentucky for Jordan was leaving her team of riders at home. With a new assistant to hold down the fort at home, she was able to travel a little easier and is grateful to have Meg Finn running things at the farm.

Getting ready to leave also meant having Jordan’s boyfriend Aaron Nilsen help get the new-to-them trailer updated and repaired to be ready for the approximately 3,000 mile journey (each way!), and pack for the three horses going. 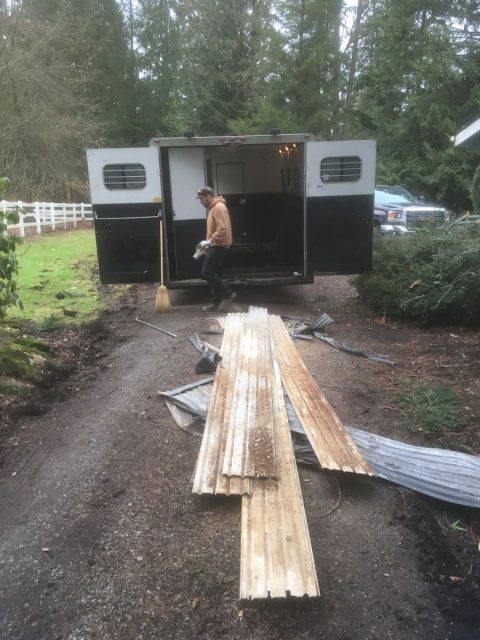 Packing also meant being prepared with some sheets and leg wraps for the horses (and even a blanket for Jordan) from Draper Therapies to keep them comfortable and keep their circulation going for better and faster recovery after workouts, along with of course a basic med kit. Kerrits provided all new riding gear with royal blue accents–Jordan’s color–from its spring line.

Feed and hay for the road were packed, and everything from show clothes to travel gear had to fit in the rig. If you think packing for a one-day or even a weekend-long event is tough, try packing for a two-plus month trip. It’s quite a lot to remember, and to make sure everyone is safe, sound and prepared to compete at the highest levels this sport has to offer. 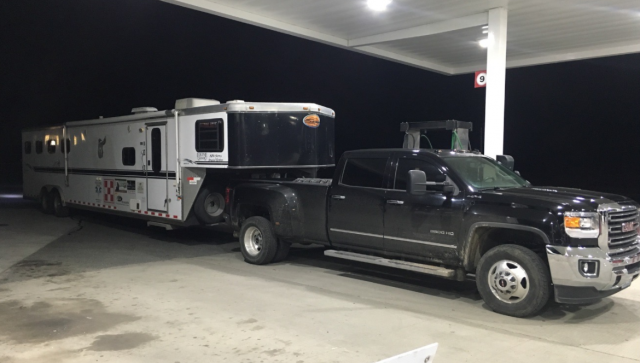 This year, in addition to Capato, two other horses in training with Jordan came along for the experience. Staccato and Destiny ISF along with her dogs Bourbon and Brandy packed up to hit the road on March 16th with Jordan and Aaron.

Following behind them in a second rig was student and groom Ava Cox with her Training level horse, Amigo, co-piloted by her father. Their first stop was 20 hours later in South Dakota where they had to do a little trailer work. Note to fellow travelers: Never leave home without a tool set, air compressor and power tools! 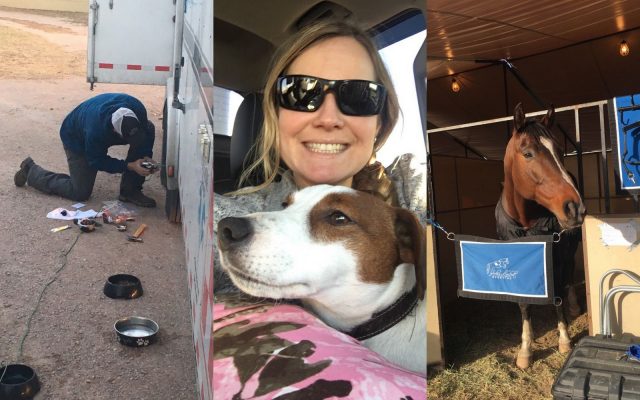 Team LJE on the #RoadToRolex. Photo courtesy of Jordan Linstedt.

The next few days were 15 hours each, with a final arrival at Carolina International Horse Trials.

Carolina International was the first stop for Jordan and her team as her and Capato prepped for Rolex. He was very electric in the ring for dressage, and while it wasn’t their best performance, after a long haul out there it was expected that Capato would have the dressage arena jitters.

Moving on to cross country, they had a great bold run and took their time with a goal of a solid completion, which they did indeed earn. Jordan tells us Capato felt bold and eager to find the jumps, and she was excited to move into show jump.

Unfortunately they had a few rails down in the final phase, but it was all in all a good solid first outing for the season. With some time between then and the next show, Jordan has a packed schedule with some of the top trainers to help finesse their show jumping and leave more of those rails in the cups. 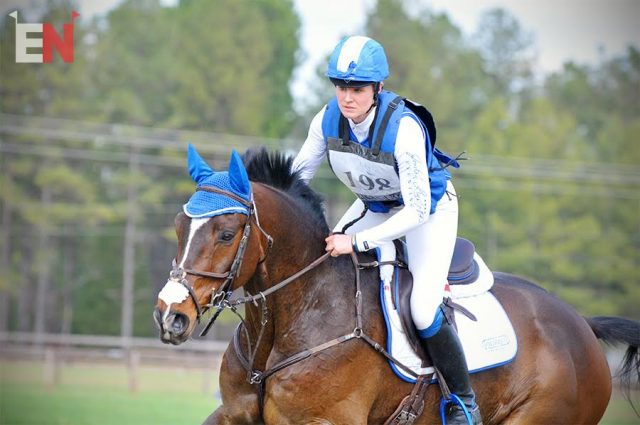 In addition, the two training horses performed beautifully, with Destiny finishing her first Training course and Staccato preparing for his move up to Prelim in the very near future.

Jordan settled into Long Leaf Lodge across the street from Will Faudree for a week of head-down prep and lessons before heading to The Fork, where they finished third in a division of Advanced.

Stay tuned to see where Jordan is headed next and follow her and Capato on their #RoadToRolex. Have photos of them to share? Tag her and Capato on social with hashtag #CapatosGotHops! And check back soon as we follow Jordán and Capato all the way to #RK3DE2017! 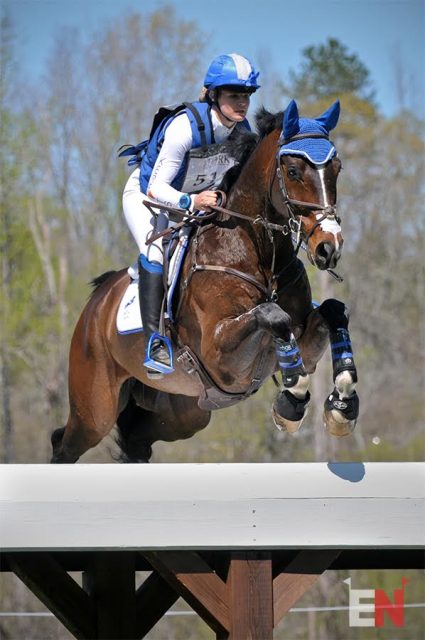