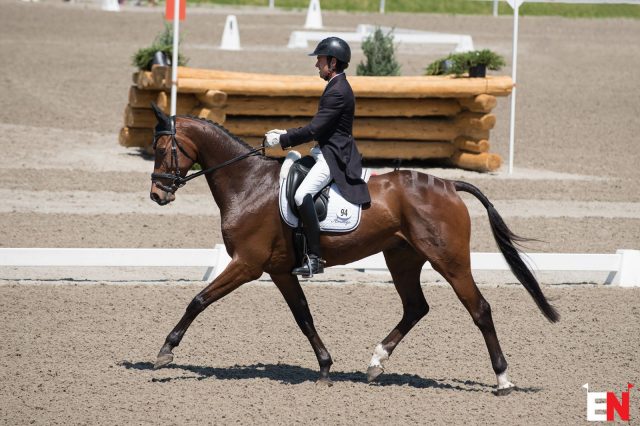 Switzerland’s Felix Vogg initially came to the U.S. to spend the winter and early spring season preparing to compete at the WEG Test Event at The Fork in April. After the Carolina International in March, however, he decided to stay through the summer in anticipation of hopefully competing at the World Equestrian Games with his top horse, Colero (Captain Fire X Bonia, Bormio xx), a 10-year-old Westphalian owned by Jürgen Vogg.

During the last several months, Felix has experienced the best of U.S. eventing, competing all over the East Coast while basing out of Boyd Martin and Phillip Dutton’s farms in Unionville, Pennsylvania. He made the trek up to Quebec, Canada to compete this week at the MARS Incorporated Bromont Three Day Event, an excursion that is so far going his way, as he and Colero lead the CCI3* division after dressage on 30.2. 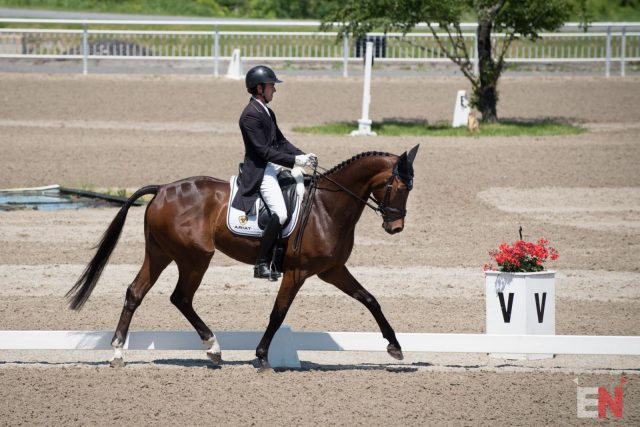 Felix said he like the trot work but the horse “got a bit weak” in the canter. “But the lead is the lead and I was happy that he was quiet.” Almost too quiet, however. Felix said Colero was fresh in the warm-up but backed off once he entered the ring.

“In a three-star test they have to want to do it and you have to attack it a little bit more,” he said. “He’s still a little bit of a green horse and when a lot of things come together in a test or a big ring, he gets a bit — not scared — but a little bit shy.”

Felix is loving his first trip to Bromont. “The cross country is one of the most beautiful places in the world. It’s perfect for eventing.” He’s also enjoyed the trademark friendliness of Canadian culture combined with the closeness of the eventing family. “It’s a little bit you’re with your own family here. It’s not against each other, it’s with each other.” Indeed, he’s felt very welcomed everywhere he’s gone throughout his North American journey. “That’s why I stayed here.” 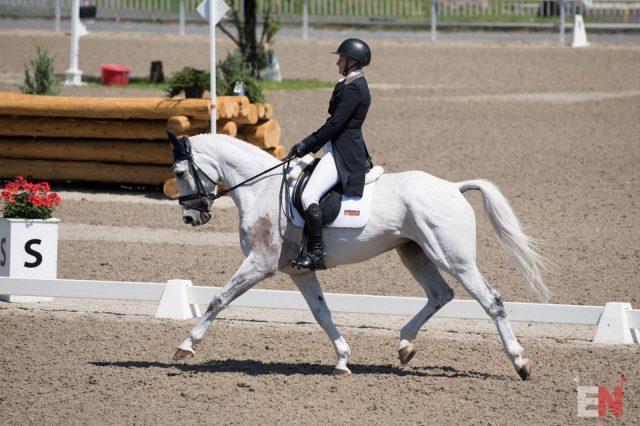 Sara Kozumplik Murphy and Rubens D’Ysieux (Balougran X Davidoff Silver Shadow, Mr Blue) tied Doug Payne and Getaway for second place on 31.2. While pleased overall with their performance, Sara felt as though she left some points on the table while trying to contain the 13-year-old Selle Français gelding’s enthusiasm in the ring.

“Cantering down the centerline I thought he wasn’t going to halt.” She said the lateral work felt rushed and there were small mistakes such as jigging in the walk and taking only four steps instead of five in the rein back. “It’s a great thing to be such a princess that I can do a test like that and feel like it wasn’t a very good test for where we are. That’s a nice place to be in but I wanted it to be a little better.”

Sara attributed Rubens’ energy to his high level of fitness which won’t come amiss in the second phase. “If he’s going to be one thing today I’d rather he was too up than too dull with what they have to do out there tomorrow.”

The pair finished second in the 2017 Bromont CCI3* but added 13.6 time penalties on cross country. She walked the course this year with time in mind and feeling that she has a stronger, fitter horse to get the job done.

“It’s going to be interesting to go out there and feel the difference between this year and last year,” she said. “I had good course walk thinking about hugging the rope and being neater and efficient. Rubens is not a massive striding horse but he’s rideable and a good jumper so I can be tidier.” 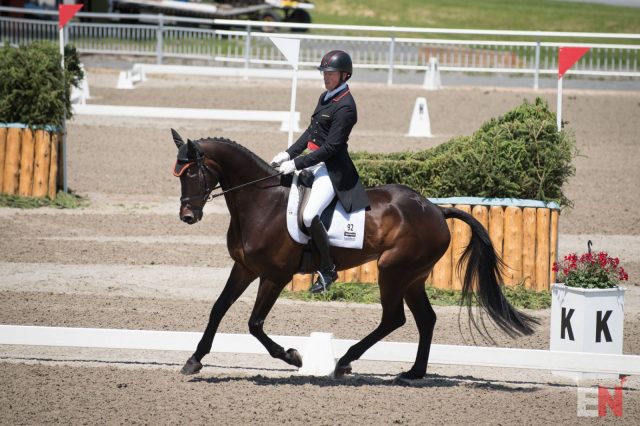 Doug said that Lisa Wall’s 11-year-old Oldenburg Getaway was the “best he’s been” in dressage. “This spring he’s become more and more relaxed every outing. I think he’s just starting to full understand what the game is. As he becomes more comfortable he becomes more rideable, and I think there is a lot of room for him to continue to improve.”

The main arena at Bromont has a big atmosphere and is a good challenge for young horses. Doug dropped his reins while circling the ring and let Flynn have a few moments to stretch his neck and relax before starting the test. “This was a very good indicator for where he’s at. He’s an exciting horse to have.”

Named for his previous rider, Matthew Flynn, “Flynn” had run Preliminary before coming to Doug in 2016. They spent a full year at 2017 and this year have finished in eighth and sixth at the Carolina International CIC3* and The Fork WEG Test Event CIC3*. This is the son of Contendro’s first CCI3*.

“If he’s feeling really good then we’ll take a shot at (time),” Doug said of tomorrow’s cross country plan. “He has a very good gallop and his shortcoming is if he starts to get a tired he takes longer to adjust.” Fitness will be the big test and they had a good prep run on the hills at Virginia Horse Trials two weeks ago. “It’s a pretty challenging course. It will be great for the horses. It’s very fair and the ground is really good.”

With only one horse in the entire competition, Doug has been able to enjoy all that Bromont has to offer, from the food to the other sporting activities. “I haven’t played this much golf in a long time.” 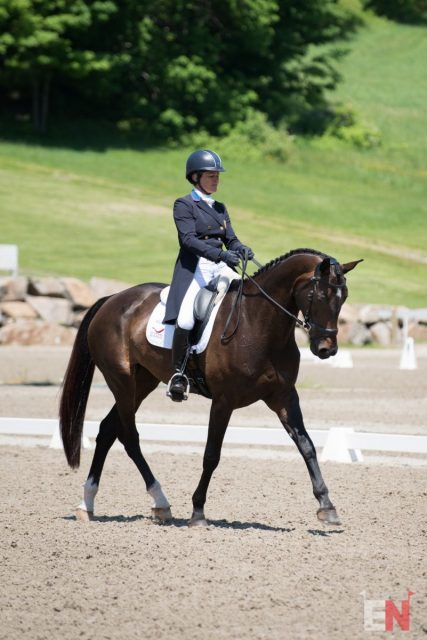 In fourth place after dressage is Lynn Symansky and Mary Ann Ghadban’s 14-year-old Holsteiner mare Under Suspection (Contender X Naomagic I, Exorbitant xx). They are the pair picked to win by both EN and EquiRatings, who crunched the numbers to discover that victory here would move Lynn into seventh place provisionally on the FEI Eventing World Rankings ahead of Luhmühlen. 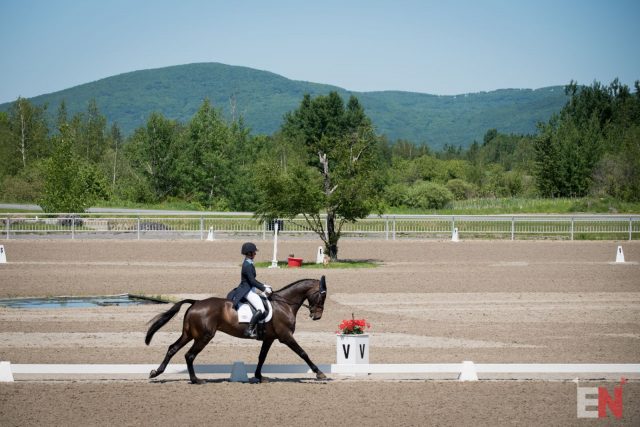 As is becoming standard with the new scoring system that disregards the 1.5 FEI coefficient, the scores after dressage are tightly packed. Tomorrow’s cross country course designed by Derek di Grazia features no small amount of accuracy questions combined with long gallops and hefty terrain. It will be a true test of fitness and time penalties will have a heavy influence on the scores.

“It’s not a dressage competition,” said Felix, whose horses have added swimming to their fitness routine while Stateside. “The questions they built are really nice but you have to ride it and it’s a little bit tricky. I think the biggest or hardest thing will be the fitness. The fittest horse will be quite happy tomorrow.”

“I’ve always loved Derek di Grazia’s courses. Bromont just gets better every year,” Sara said. “That is a seriously beautifully built (course). It’s going to be perfect footing. It could not be any better.” 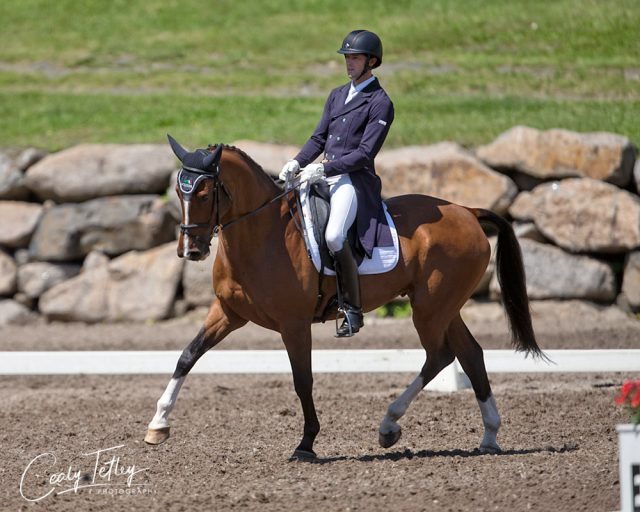 Will Coleman and Off the Record. Photo by Cealy Teltey.

Will Coleman claimed the CCI2* lead yesterday with TKS Cooley and today took command of the CIC2*, scoring a 26.1 with the Off the Record Syndicate’s Off the Record (VDL Arkansas X Drumagoland Bay, Ard Ohio).

“He’s slowly becoming more professional in his attitude and his work ethic,” Will said of the 9-year-old Irish Sport Horse. “He’s coming along. I’m really pleased with the horse’s progress particularly over this spring. He’s had a pretty consistent year and we just hope that can continue.”

“Timmy” moved up to Advanced this year, winning his debut event at the level at Carolina International and finishing second in his first CIC3* at Fair Hill. Had Bromont offered a CIC3* this week, Will said he likely would have run Timmy in that division, but the CIC2* is still a good test as he builds towards a fall CCI3*.

“There is still plenty to do out there. It’s not a cupcake (cross country) course. Hopefully it will just give them a good positive start to the fall campaign.” 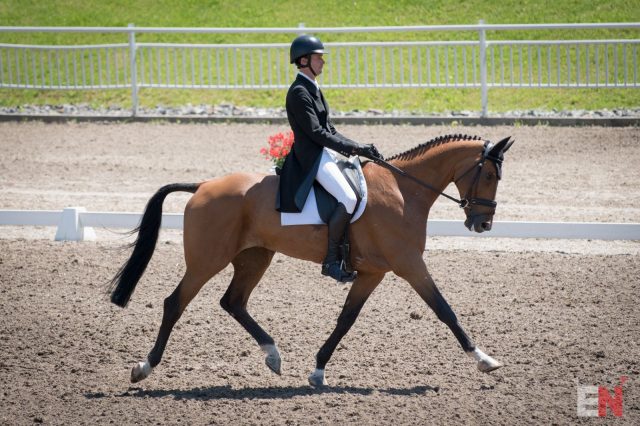 Matt Flynn and Get Lucky. Photo by Leslie Threlkeld.

Will is also sitting fifth in the CIC2* with the Conair Syndicate’s 12-year-old Anglo Arab Soupcon du Brunet (Zandor Z X Bikadine, Neouredine du Lirac). He’s coming back from an injury and Will said he was a bit more nervous in the ring, but a 30.2 is not far from the top.

We’re looking forward to a full day of cross country tomorrow starting with the CCI* at 8:30 a.m. The CCI3* will start at 11:15 a.m. followed by the CCI2* and ending the day with the CIC2*. A preview of the CCI3* course is coming soon. Stay tuned! 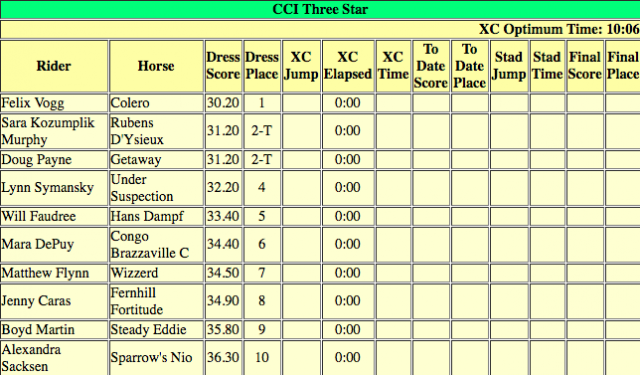 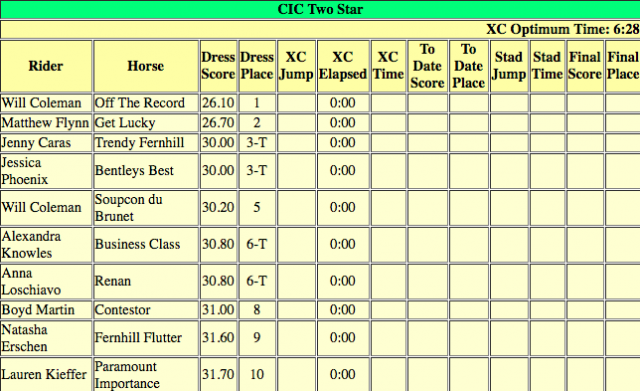