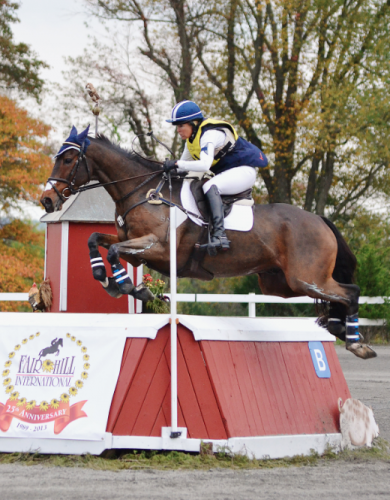 I like to attend the annual meeting every year because in spite of the cost and the time away from the farm, I feel that if you’re passionate about a sport — one you make a living in or want to improve — it’s really important for riders at all levels to attend. There were some great speakers; I’ve heard a highlight was Daniel Stewart, who I unfortunately missed, but I watched the video clips of his presentations on the USEA site. He has the motivational sports psychology part down and has really great exercises geared toward rider fitness. Every level of rider would benefit from learning more about his program. [Read EN’s recap of Daniel’s session here!]

The Active Athletes, under Phillip and Buck’s guidance, is the most effective group of upper-level riders I’ve been involved with since becoming involved. These are riders working hard to make our sport better and to make difference, and I’m proud to be part of it. One focus has been to improve transparency and communication about things like selection procedures so that they are understood by everyone involved with our sport. Another area we’ve looked at is ensuring that our cross-country courses are doing the right job to prepare our horses for the level.

I’m also proud to be co-chair of the Young Rider Committee, though am so sad that Tim Murray is stepping down as my co-chair due to obligations with the Rules Committee, which he’s now on. I’m very happy to have Diane Snow take his place. It was Diane who brought forward the idea of an Emerging Athlete Program; we encouraged her to put a sub-committee together and gather the support she needed, and now we have this important program to identify and bring along young talent. As always, Vicki Fine has a done great job with the Young Rider Mentorship Program, which pairs young riders who don’t make their area championship team with event officials in order to experience the administrative side of eventing.

Another highlight of the convention for me was David O’Connor’s keynote speech. His passion for the sport was obvious throughout his entire talk, and it’s exciting to have a coach that’s so good at communicating that. He’s done a great job developing the Under 25 and Developing Riders programs, and my hope is that more attention is paid to older riders as well. I think something that was really exciting was that David started his speech stating his belief that we’re all in this sport together; it is one sport that accommodates the goals of both lower- and upper-level riders, amateurs and professionals. I couldn’t agree more.

I practice the same things that everyone else who has event horses, no matter the level, works on every day. As a four-star rider, I try to perfect the last 10 percent, but we all make the same mistakes, have the same highs and lows, and experience the same thrills whether we’re going Novice or Advanced. It was just so great to hear David say that. We should embrace our sport as one.

I was really honored to win two awards at the Convention. The first was for Inmidair, who received the PRO Horse of the Year sponsored by the Segals and in honor of My Boy Bobby. I’m so thankful for Cassie and Carl Segal’s support of our sport, and I’m proud to call them my friends. The award recognizes the horse that is most successful at the CIC and CCI levels and is weighted more heavily toward CCI results.

I was so lucky to be the recipient of a brand new award that the Segals commissioned: a beautiful glass trophy with a 3D image of My Boy Bobby etched inside and Inmidair’s name engraved on the outside. JR is completely honored to win the award; of course, he thinks he’s won at least 10 awards, and his only regret was not being there in person to give a speech. I can’t thank enough my whole team of supporters who helped to get JR to this point and who have supported me through thick and thin, particularly my Mom and Dad.

I was (almost) completely surprised by the second award. I have to be honest that I was a bit suspect of my parents and Tom both wanting to go to the meeting and thought something might be up. My Dad is on the Event Owner’s Task Force but could have called in to their meeting. By the time Saturday morning rolled around, I was completely suspicious as anyone who knows my boyfriend, Tom, would know that the last place he would want to be would be the convention; he’s very supportive, but it’s not exactly his idea of a vacation. I was humbled to win the Ironmaster Trophy in honor of Neil Ayer, who was such an influential person in our sport. I know one recipient has been Amy Tryon, and it makes me so proud that it’s something I share with her.

Back home in Virginia, I’m trying to survive the snow without an indoor. I can’t wait to go to Aiken, and we’ll be there on the fifth. Happy holidays to everyone!