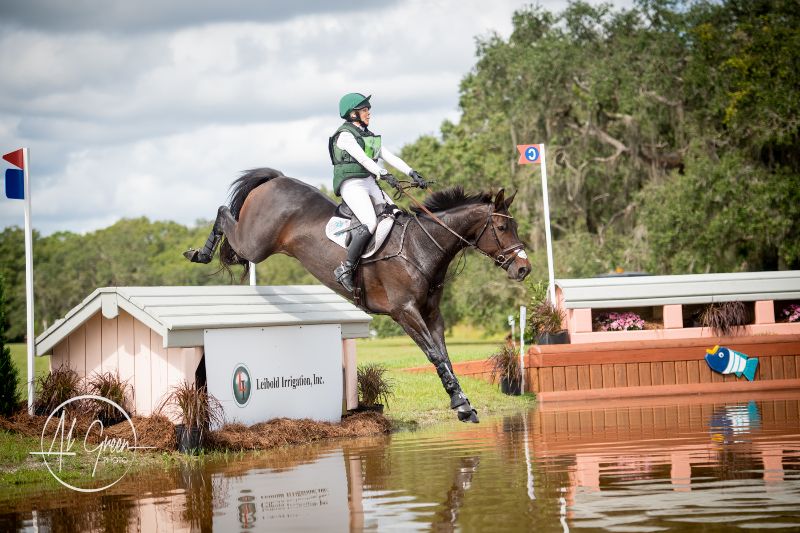 Florida-based Swedish rider Jennie Jarnstrom-Dennis galloped around clear and fastest of the day to take the lead in the inaugural CCI4*-S, sponsored by B&D Builders, at The Event at TerraNova. Jarnstrom-Dennis (SWE) and her Hanoverian mare Flower Girl (Futurist x Lucy/Romino) were fourth after dressage on 30.8. Not a single horse-and-rider combination made the optimum time; she added 10.8 time penalties to lead on 41.6.

Jarnstrom-Dennis said that Flower Girl competed at the CCI4*-L level at Jersey Fresh in May, but had an unlucky 20 penalties on cross country there, which prompted her to take the more conservative long route at the double corner combination late on today’s course. She knew that the mare had speed on her side and that she’s a good jumper, and the fastest round of the day put them in the lead regardless of taking the slow route.

She is also placed fourth in the Open Preliminary riding a Trakehner cross, Splash Dance (Stiletto x Sue’s Dancer xx). She said that it was nice to have a run on this horse before the four-star, to get a feel for the course. Both of her horses are U.S.-bred and she purchased them as youngsters from their breeders and developed them herself.

“I put the pedal to the metal on my first horse and was one of only two to make the time in that division,” she said. “That was awesome.”

“It’s a beautiful event,” she continued. “We came here for the test event and I’m like, goodness, what have they set up? It’s just an honor to be here; it looks like I imagined this place, it’s just never ending improvement.”

Jarnstrom-Dennis is riding for Meals on Wheels in the Charity competition. Her students, junior riders Taylor and Nicole, picked the charity for their barn to represent. 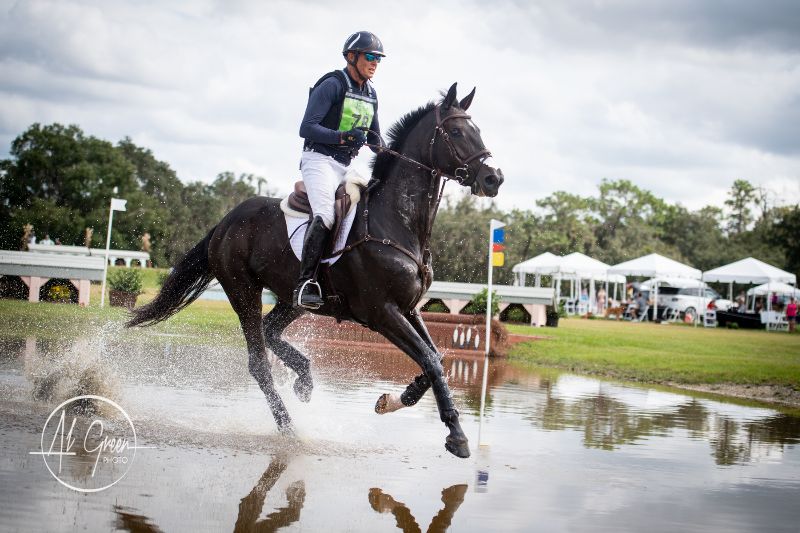 Leslie Law (GBR) said of his two horses, “They both felt great. They said ‘yes’ today; this is just their second time doing the four-star. The first horse I did opt to go the long way at the corner at the end; he had the experience to perhaps process it, and probably in hindsight he would have jumped it but I’m delighted with the way he went, full of confidence. Lady Chatterly went the straight route and went really well. It’s hopefully been a positive experience for both of them.”

In regards to tomorrow’s show jumping he said, “The Typically Fernhill horse gets his adrenaline up a bit so he can be an exciting, forward ride, but he’s a good jumper; the mare can be a little spookier, but they’re two good horses and you ride them according to what they are. They’re stepping up, they’ll have to get used to jumping a bigger track but they’re both very capable.” Law is based out of Ocala.

In the CCI3*-S, sponsored by SUNZ Insurance, Kozumplik-Murphy, who operates out of Overlook Farm in Berryville, Virginia, and Mardanza Farm in Micanopy, Florida, moved into the lead with Devil Munchkin, a KWPN gelding (Casiro 3 x Rhona/No Ski) who she co-owns with longtime friend and supporter Edith Rameika. The optimum time also proved out of reach in this division, and with 9.2 time faults she now leads on 40.6, followed by dressage leader Jon Holling riding Pioneer Archibald, who added 11.6 time faults and is now on a score of 41.2.

Kozumplik-Murphy said, “They’re two very different horses. I was actually planning on giving ‘Kermit’ a little more time; he’s a lovely horse, he’s a little faster at the gallop than Rubens so I can be a little chancey at the fences.” 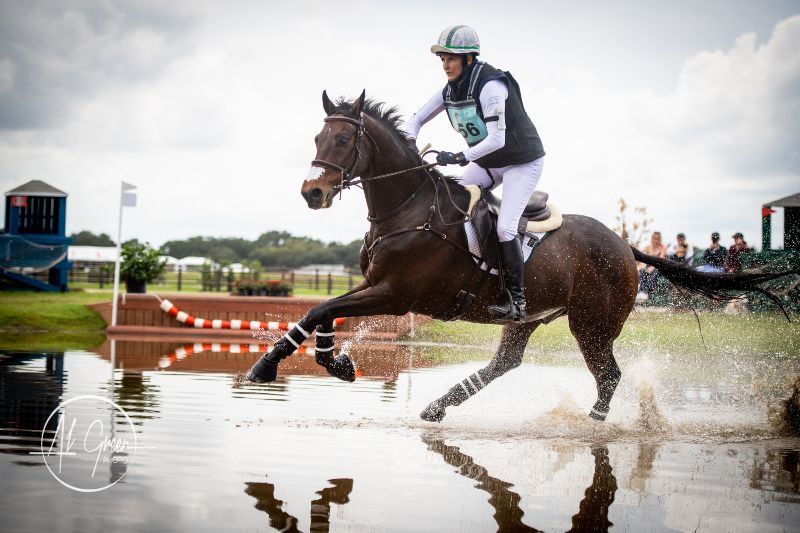 She said that she wasn’t really expecting her four-star horse to make the time, but she was pleased with his round regardless. “He’s an unbelievable jumper and we have a really good partnership but at the end of the day he just doesn’t have a lot of staying power,” she said. “I have to be as neat as I can when I ride him and perhaps I wasn’t quite as good as I could have been but I was actually delighted today, he’s such a cool horse, he answered every question.” 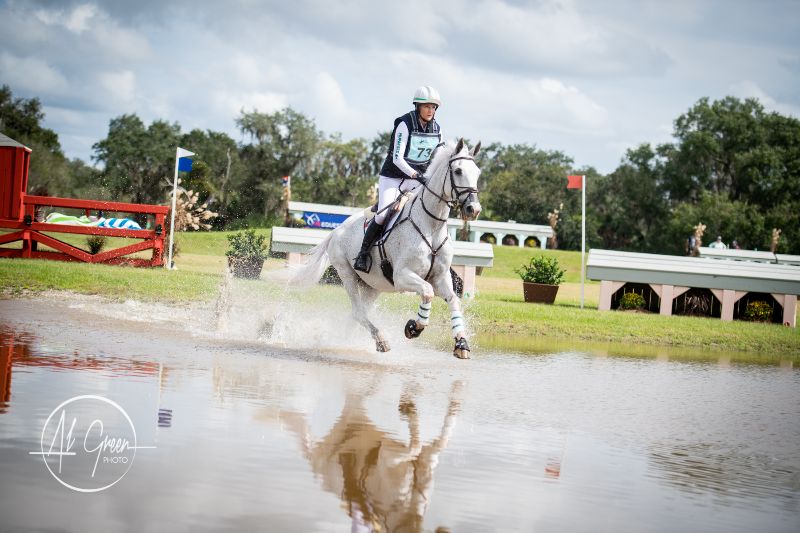 Every rider in the competition, from Beginner Novice to the four-star level, is on a team representing one of three non-profit organizations. Riders could select a team or those who didn’t have a preference were randomly paired. The non-profits include Southeastern Guide Dogs, Saratoga Manatee Association for Riding Therapy (SMART), and Meals on Wheels PLUS of Manatee. After points have been tallied, with the lowest penalty score winning the challenge, the first-place team will earn a guaranteed minimum of $10,000, second place $7500 and third place $5,000.

Jennie Jarnstrom-Dennis, as stated, is riding for Meals on Wheels. Both Kozumplik-Murphy and Law, as well as Holling, are representing Southeastern Guide Dogs.

At the conclusion of cross-country, SMART leads with 1812.2 cumulative points.

Sunday morning, a non-denominational worship service will be held at 7 a.m. The final horse inspection for all the FEI Divisions begins at 7:30 a.m. EDT. The event concludes with show jumping and the award presentations, beginning at 8:30 a.m. with the Starter division. The CCI3*-S begins at 11:45 a.m.and the CCI4*-S at 12:30 p.m.