I started writing this a few weeks ago and put it on the shelf, because to be honest, I didn’t have any cute pictures of George. You know, the important things! We’re in that stage where there are not a lot of milestones or updates, because, as you’ll read below, life is a bit boring right now. But look for us in a few weeks, because I might have entered our first Beginner Novice mini trial today

I used to think golf was boring. OK, I still think golf is fairly boring. But my husband loves it, so I’ve learned a thing or two about the game over the past 10 years. Regardless of your opinion on golf, you know who Tiger Woods is. And if you’re like me, for reasons you’ve never quite been able to put your finger on, he is always the one you cheer for. Tiger quite literally had it all at a very young age, and this past weekend, he had it all once again. In most sports, I don’t like the players that win all the time — I’m looking at you Tom Brady. So why did I sit on my bar stool, willing Tiger to win last Sunday afternoon, then watch with tears in my eyes as that last shot went down?

For those of you who don’t follow golf, I’ll skip the soap opera that was Tiger, I’m sure you know that part. But did you know that he last won the Masters in 2005? Or that he won his last Major in 2008? That he had multiple surgeries, a circus of a personal life, and enough setbacks to make a normal person quit? I have a hard time comprehending sticking with something that isn’t quite working out for three years, much less 11. But there he was, in 2019, accepting that green jacket. What Tiger Woods did, in my mind, was nothing short of extraordinary and is one of the greatest feats I’ve ever seen in sports. I doubt many of us can comprehend the baby steps he took to get from 2008 to 2019.

So it is with extra resolve, that I set out to take the baby steps with George this year. We’re about 30 rides in at this point, and for lack of a better word, we’re in the boring stage. We’ve knocked out the low hanging fruit. George steers now, George no longer tries to run away from my leg, George has learned to go out and work, even when his friends are in the barn, George has learned to stand at the mounting block.

However, there are so many things he doesn’t do yet. He pushes against my left leg for a minimum of 10 steps before taking a step away. He doesn’t bend well going either direction. He doesn’t have much of a canter transition. He still looks a lot like a race horse, even with months of let down time. He still gives me the “ears” a lot, the ears that say “Mom, I tolerate you and your crazy ideas up there, but I have absolutely no idea what you want.” 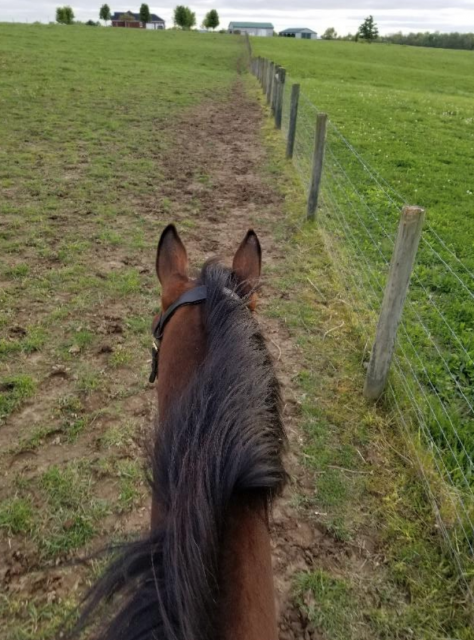 One of our many long walks … I love his ears! Photo by Jennifer Reisenbichler.

It can be so hard to be patient, to get truly excited when something that sucked really badly yesterday sucks just a little bit less today. Or when what didn’t suck so bad yesterday is suddenly 10 times worse today. We are so tempted to get on Facebook and get secretly disappointed when we see another trainer’s horse running a recognized event in April, or see one with a clean flying change at this stage of the game. We have to remember that our horse isn’t on Facebook and has no agenda other than eating grass and feeling safe with his or her human.

Our baby steps might come rapidly, or the tracks might look like a drunk leaving the bar at 4 a.m. Some days we’ll hop off our horse feeling like the world is ours, and other days, it’s all we can do to keep our temper in check and end the ride before we take 10 steps back. Our horses deserve for us to celebrate each and every baby step along the way. Even when we want to quit, even when we’re sick and tired of things not going right, even when we wish we had $10k to buy something civil and trained.

I’ve always said that I wanted to be a good rider, maybe even a great rider. I’ll admit that I’ve given up on my fair share of horses. And I’ve given up on myself a time or two along the way. Riding and training horses is rarely glamorous and it never goes exactly to plan. Even when we have a great day and everything goes right, there is sure to be one that knocks us on our rear right around the corner. But if Tiger Woods can go through 11 years of baby steps to make it back to the top, surely we owe it to our horses to embrace the process and the many tiny steps that come along with it. 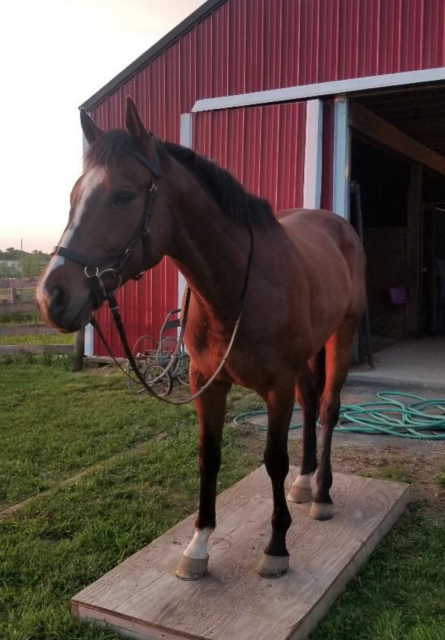 Is he a ranch horse after all? Time will tell! Photo by Jennifer Reisenbichler.

Like I said at the beginning, I wrote this two weeks ago. In that time, George saw the chiropractor and we’ve finally been able to put in a few solid weeks of riding, even if we are dodging the April showers. I don’t feel like we’ve made a ton of progress, but reading back on my (two weeks old) list of things “George doesn’t do yet” made me realize just how far we’ve come! He is 100% more willing to bend after being adjusted, and he is starting to trust and reach for the bit. He also had the “ah ha” moment regarding leg yielding and moving his shoulders. Plus he’s put in several solid jump schools.

Maybe most importantly, he loves my niece and nephew and is happy to stand all day in the cross ties while they learn to groom. I’ve never been one to keep a riding diary, but using this as the next best thing, I can say it’s been really beneficial so far! The baby steps really do add up fast if you pay attention. 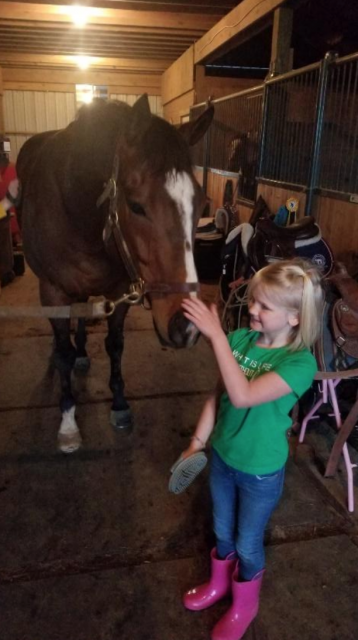