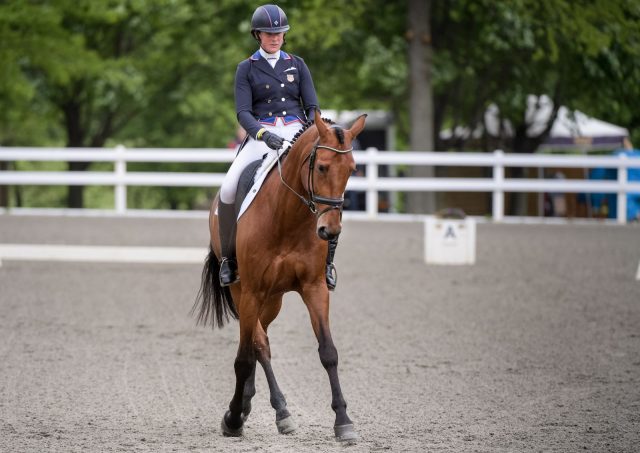 The first day of dressage kicked off under chilly, overcast conditions at the Jersey Fresh International Three-Day Event in Allentown, New Jersey. At the conclusion of the first phase for the CCI4*-S, Lauren Kieffer and D.A. Duras prevailed to top the leaderboard on 31.1.

D.A. Duras, an 11-year-old KWPN gelding (Numero Uno X Medoc, by Quattro) owned by Jacqueline Mars and Debbie Adams, last contested an international at Red Hills last year and has had time off ever since recovering from a minor injury. He quietly returned to competing in an Open Intermediate section at Ocala last month.

“We took a long time to bring him back, probably more than was necessary, but it worked in our favor because it gave him more time to mature. He’s been very workmanlike,” Lauren said. “He was great in the ring today. It was cold and windy and blustery, but he stayed rideable, and it was a test where I could really push on him through it.”

Lauren is taking it one event at a time with D.A. Duras and is tentatively aiming him for the CCI4*-L at Bromont next month. With that in mind, she is looking to give him a solid prep run over Capt. Mark Phillips’ track on Saturday.

“The course is pretty technical, and there are a lot of fences. The short-format course has 29 numbered fences, and the long format has 30 fences and a lot less time to do. it. Mark has done a great job; the footing is good,” Lauren said. “He’s a rideable horse and likes to be quick anyways. We won’t put the hammer down since it’s his second run back, but we won’t be going slow either.” 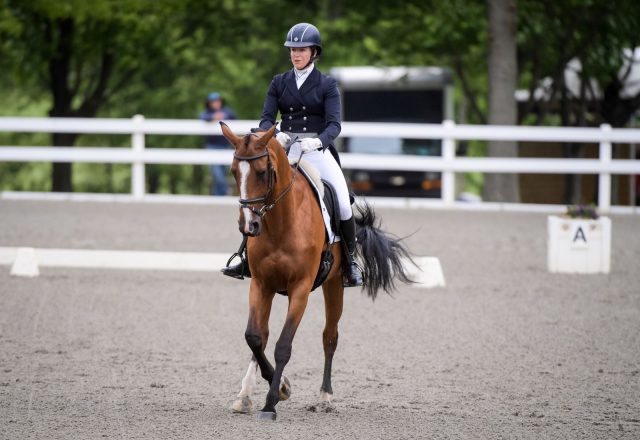 Allie Knowles and Princess B. Photo by Alison Green Photography.

Allie Knowles sits second in the CCI4*-S with Nancy Elberty’s homebred Princess B, a 14-year-old Dutch Warmblood mare (Calvados X Rheabria Z, by Rex Z), on a score of 32.7 — a 2.4-mark improvement on their debut at the level at Chattahoochee Hills last month.

Boyd Martin sits third on 33.0 with his homebred Ray Price, a 10-year-old Thoroughbred/Dutch gelding (Raise A Stanza X Fair Fiona, by Salute) owned by the Ray Price W Syndicate. “Ray” was originally entered to make his CCI5*-L debut at the Land Rover Kentucky Three Day Event last month, but Boyd opted to aim for the CCI4*-L at Bromont instead. 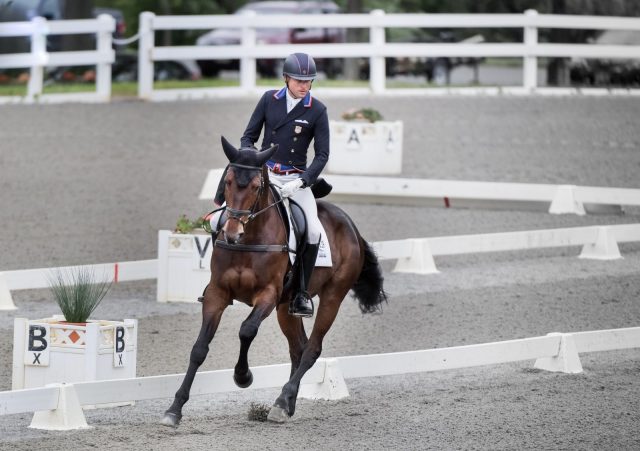 “He’s been at the level for a year now. He’s a sensitive horse and has taken a little bit longer to develop than some of my others. He can get a little bit nervous and on edge in the ring,” Boyd said. “Today was a good day. He took a deep breath and relaxed in an arena that can cause a lot of horses to be tense. If the ground is good, I’ll open him up and give him a good spin around on Saturday.”

Will Coleman sits fourth on 33.5 with The Off The Record Syndicate’s Off The Record, with Allie Knowles also sitting fifth on 34.4 with Katherine O’Brien’s Morswood. Both horses are entered to compete in the Tattersalls CCI4*-L in Ireland later this month. 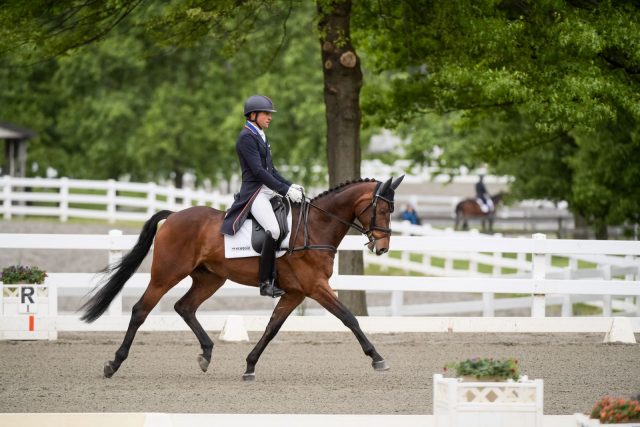 Looking to the CCI3*-S, Boyd Martin and his newest ride Luke 140 lead the 56-strong field after the first day of dressage, scoring 25.5 in the horse’s first international on U.S. soil. There are still 10 more horses to see in this division tomorrow morning.

“Luke,” an 8-year-old Holsteiner (Landos X Omega VI, by Limbus) owned by The Luke 140 Syndicate, was produced by Sweden’s Malin Petersen with strong results in Europe before being imported to the U.S. in February. He finished second in the Varsseveld CCI3*-L in the Netherlands last year on a final score of 38.5.

“I found Luke right at the top of Germany up near Denmark in January in the freezing cold,” Boyd said. “I’m very grateful I’ve had support and borrowed the money to syndicate him. At the moment, the horse has exceeded my expectations. We’ve only done two events since he arrived — one Training and one Prelim — and this is his first FEI competition with me. He’s a little horse under 16 hands, but he has a proper engine and a brilliant gallop, and he’s a good mover.”

As for his thoughts on Capt. Mark Phillips’ course, Boyd said, “It’s not overly big, which is important for this parcel of property since it’s such a twisty, turning course at this venue. It’s technical, with a lot of narrows and corners. It will take some efficient riding to get the time.”

With that in mind and considering it’s his first international with Luke, Boyd said his plan will be a strategically steady run with the future in mind. “We’re still developing a partnership, so it’s my intention to take it slow and steady on cross country and pick up some time penalties,” Boyd said.

“The plan is to keep him in short formats for most of the year, and perhaps move him up to Advanced horse trials before aiming for a long format towards the end of the year at Fair Hill. My aim is to produce him the right way for the future, and he is joining an exciting group of horses I have with potential to compete at a future Olympics or World Equestrian Games.” 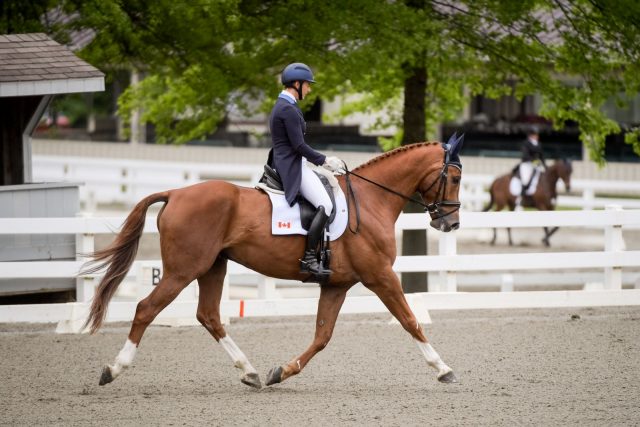 Looking to the rest of the CCI3*-S leaderboard, Colleen Loach and Peter Barry’s Vermont, a 7-year-old Hanoverian gelding (Van Helloing X Hauptstutbuch Hollywood, by Heraldik xx), scored 27.6 to sit in second for Canada. These two are coming off a win in the Fair Hill CCI2*-S last month, where they finished on their dressage score of 28.3.

Alexa Gartenberg and her own Louis M, a 14-year-old Rheinlander gelding (Lissabon X Angelique M, by Abanos), round out the top three on 28.4. King Louis, as EquiRatings has dubbed him thanks to his prowess in dressage, is no stranger to Jersey Fresh, having won the CCI3*-L in 2017 with his previous jockey, Cornelia Dorr. 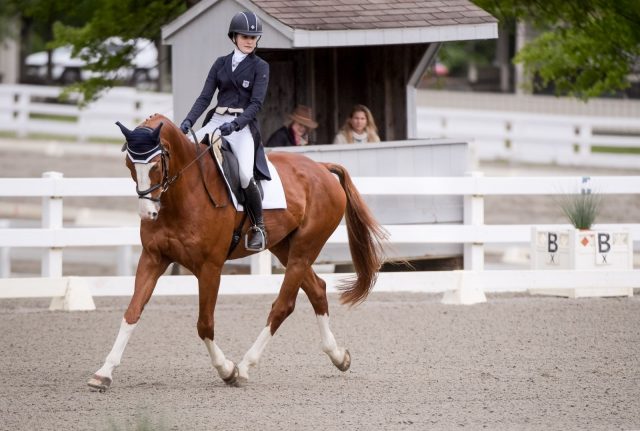 Clayton Fredericks and his own FE Coldplay sit fourth in the CCI3*-S on 29.8 — the only other score in the 20s all day across both divisions. With just 5% of today’s competitors going sub-30 in cold, windy, spooky conditions, tomorrow’s warmer forecast should prove a welcome change.

There is no live stream from Jersey Fresh, but The Horsepesterer, better known as David Frechette, will be uploading videos to his YouTube Channel. Many thanks to Alison Green, official event photographer, for providing EN with beautiful photos from the last two days. Shelby Allen and yours truly arrive on the grounds tomorrow. See you then! Go Eventing.