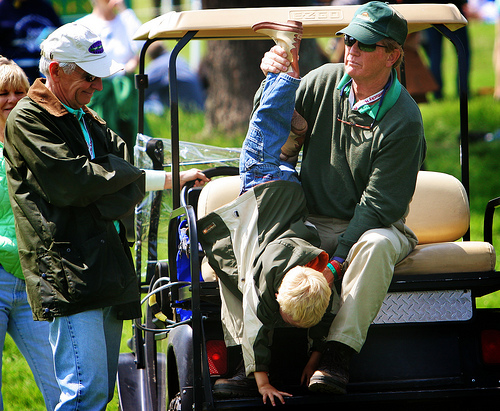 Good morning EN, I hope you are enjoying your final pre-holidaze weekend and taking advantage of your final hours to squeeze in an extra ride before your in-laws arrive. For those of you still wrapping up school, may the force and lots of EN karma be with you. If you need an uplifting voice this will help.

Big news from the USEF: the iconic Jimmy Wofford has been honored with this year’s Lifetime Achievement Award. I don’t think I need to underscore how well-deserved this is; as the press release states, “He has…become one of the most respected trainers in the sport and there are few riders competing today who have not been influenced by Wofford.” I think this is a fitting summary, because if I tried to write one myself this post would take me several hours to complete. Congratulations Jimmy. [USEF]

Congrats also go out to Young Adult Lucy Gordon and Adult Amateur Erica Seas who have been awarded the 2012 Worth the Trust Scholarships from the USEA. The funds will help fund further educational training. Read their winning essays here. [USEA]

Steven Spielburg talks about why he made War Horse, and about working with a four-legged star. [Horsetalk]

Dressage queen Isabell Werth rode in a golden helmet at the 2011 CDI-W in Frankfurt. Thumbs up for Isabel. [Eurodressage]

As Visionaire already mentioned, Marilyn Little-Meredith has been given the ride on Clair De Lune SE and the Chronicle has reported on the new partnership. Marilyn is quoted as saying, “What an asset to U.S. breeders to have a stallion such as this both standing on U.S. soil and also competing here, so they have the opportunity to both watch him develop and also call him truly ‘made in America’–bred, born and developed.” This will be an exciting partnership. Go Marilyn. [COTH]

The Chronicle has also reported the death of rider Amy Kynaston after a fall at an Illinois horse show on Dec. 4. John mentioned this during the convention and EN sends sincere condolences to her family. [COTH]

Best of blogs: Francis Whittington is doing a clinic at Longwood Farm.

Blast from the past: Rick Wallace posted his promo that was made in in 1992 in support of his bid for the United States Eventing Team. Make sure you watch at 1:38, where he vaults onto his horse in the vet box. How many eventers would let you do that today??

Have a great Saturday, go eventing.