Joan Davis of Flatlandsfoto sent us this fun story of rescued event horse Palmerston North, “Smartie.” Smartie was saved from a bad situation, and has returned to his true love of jumping and eventing. Many thanks to Joan for sharing, and thank you for reading. All photos used with permission. 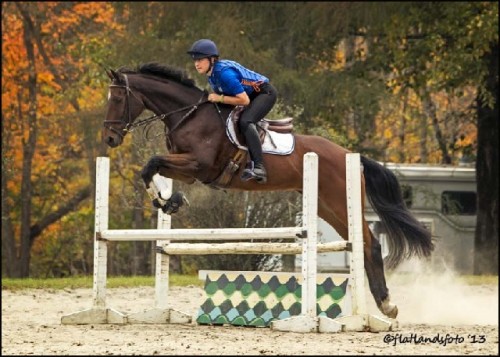 In August of 2013, my farrier told me about a good horse in a rough situation. This is something he has done, several times a year for the past 20 years. My response is always the same – we don’t need any more horses! My husband Tom and I have an eventing barn in Area 1 where he trains horses and teaches riders to event. I work as a photographer at many of the USEA events. On average we have 12 horses on our payroll, a number of which our students can take out eventing. I have no idea what made me listen this time as the last thing we needed was another mouth to feed (and feet to shoe) but I couldn’t be happier that I did!

Tom contacted the horse’s owner and was told that he was a 13 yr old NZL TB who had been purchased through a New Jersey Hunter/Jumper barn. Her life had changed and she no longer had time to ride. He was being well cared for but was in a barn with no turn out which is never a good thing for a horse bred to gallop. In addition, it appears it had been several years since he had had any kind of regular exercise. She did mention that she was told he had done some eventing in Canada with a previous owner. This was on a Friday as we were packing to leave for an event on Saturday morning. The following Monday morning we hitched up the trailer and picked him up sight unseen.

Now while my farrier is a western guy, he was a long time race track farrier and knows a quality TB when he sees one. I shouldn’t have been surprised by what a lovely horse this was… However he was going to be a bit of a rehab project. I don’t think I’ve ever seen a horse weave with the zest he did, but after 48 hours and some turn out he settled in quite nicely.

His previous owner didn’t know his eventing name but his halter said “Palmerston North.” For kicks I checked the USEA database and found a horse by that name that I had photographed in 2009. After consulting my photos, there was no doubt that it was him. Going back into the archived USEA records, it has Palmerston North as being imported in 2006. He was competed by Kyle Carter in his second event in this country and then ridden by Will Coleman his next couple events. He finished 3rd in the P division at Millbrook with Will in 2007. After that he competed with a young rider through the CCI* level, never incurring any XC jump penalties in this country. After that it is a mystery.

We started him back under saddle slowly as he had no strength or muscle tone. He wanted to be a bit naughty at first but went straight to work when given a job to do. He looked like a kid on Christmas morning for his first jump school. No matter what fence/scary box/liverpool he was pointed at he said YAY JUMPING! He was even more excited (but very ride-able) for his first XC school here at the farm. He finished over the “big ditch,” which had a skinny roll top on the landing side set up to school a half coffin question. He walked up to the ditch and popped it, looking to the skinny on the landing side as if to say “This too?”

Come October we thought it might be fun to enter him in a schooling event to see how he handled being on the road. Like everything else, he was a star. We stopped at Denny Emerson’s farm for a lesson the day before the event and he was thrilled to show his stuff – skinnies – slices – ditches – banks – water – no problem! We didn’t do much with him but everything he was asked, he did perfectly. The day of the event he was a bit of a wild man in the dressage warm up but kept it together in the ring (stay in the white box stay in the white box stay in the white box). You could see he was in his element on XC and SJ was just a walk in the park.

Who knows what 2014 will bring for Smartie but my guess is that you will see him out and about in Area 1 galloping XC with a big grin on his face!