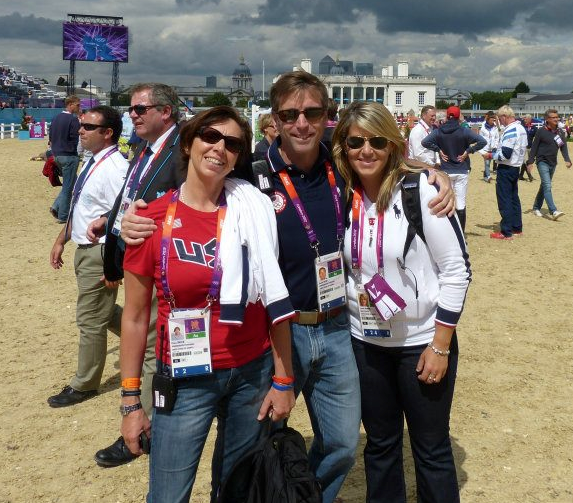 The USEF has been upfront about the fact that sweeping changes would accompany David O’Connor’s appointment as International Technical Advisor and coach for the U.S. eventing team. Joanie Morris became part of the U.S. eventing revolution when the organization named her the new Managing Director of Eventing. Joanie, who previously served as High Performance Communications Director for five years, takes the reins from former Managing Director Sara Ike. “I’ve been involved with the USEF for a long time, so when the opportunity arose to serve as Managing Director of Eventing, it seemed like an interesting opportunity to me,” Joanie said. “A lot is changing with David coming in and I’m fortunate enough to be a part of those changes.”

While Joanie previously served in a communications role with the USEF, she said her duties prepared her to step into her new position. “Working for communications was great because I learned so much about all these different sports,” Joanie said. “I had only focused on eventing for so much of my life, so it was very valuable to see how other disciplines are managed.” Joanie also said that working in communications exposed her to many different aspects of the USEF. “I had a connection with many parts of the organization, including working with Jim Wolf (USEF Executive Director of Sports Programs) and the High Performance staff. I was able to learn a lot about the governance and rules that weren’t directly related to my position, but certainly impacted my job here.”

As part of her previous role at the USEF, Joanie also served as the event director for the Adequan FEI North American Junior/Young Rider Championships, presented by Gotham North, from 2009 to 2012. “I gained a wealth of FEI and sport knowledge throughout that process, in addition to logistical and technical experience,” Joanie said. She also traveled to two Olympics and two Pan Am Games to provide event coverage for the USEF, experiences she believes will serve her well in this new role. “There’s no job outside of your job description when you travel to major events like that,” Joanie said. “You see more and do more than what you might expect.”

Joanie has seen and done a lot during her career, working for Phillip Dutton and traveling to the 2004 Olympics and 2003 Pan Ams with Will Faudree. While she initially thought she would end up in a professional riding and training career, she’s grateful for the opportunities the USEF has provided for her. “The USEF came into my life when I didn’t really know what I wanted to do next,” Joanie said. “Like many people who go through Young Riders, when I got to my mid-20s I wondered how I could stay in this business if I wasn’t going to compete at the top level. Being able to contribute, in any small part, to the Olympic movement is incredible.”

So what’s next for Joanie? Currently, she’s just trying to get settled into her new office and a totally different area of the USEF building. The changeover process is still in the works, so she’s trying to get organized at this point. Joanie will be working very closely with David in her new role, whom she said she’s fortunate enough to have known for a very long time. “The best thing about working in this sport is the people you get to meet along the way,” Joanie said. “I think we’re at an incredible advantage in that David is also USEF President, so he has a big understanding of how the USEF works;  his knowledge of the structure of the organization is second to none. My role will be to support the committees, as well as David, as the USEF develops these programs and implements them.”

Many of the new ideas and programs will be discussed at the USEA Annual Meeting on Dec. 5-9 in Colorado Springs, Colo., which Joanie said will be her first major undertaking as Managing Director. “David will be elaborating greatly on the information that went out through the Open Rider Forum at Galway and Fair Hill,” Joanie said. “He will be talking about plans for under-18 riders up to top riders in our sport, and how there’s a spot for everybody in his new program. I will be working to administrate those changes and we will hit the ground running in 2013 with training sessions.”

The future of U.S. eventing is on everyone’s minds, even more so for those at the USEF who will actually usher the sport into a new era. “Change doesn’t happen overnight,” Joanie said. “U.S. eventing had such a tremendous run for many decades, and obviously at this Olympics it didn’t go the way we hoped. But everyone is ready — from the committees and the staff to the coaches and the riders. They’re ready to take the foundation of so many medals that were won under Mark Phillips — and the programs before his — and really move it forward to the next step and return to the podium.”

As Managing Director, Joanie will provide overall administration for the sport of eventing, overseeing the High Performance program and facilitating training sessions and team trips, as well as traveling to competitions. Undoubtedly, she will play a critical role as the U.S. eventing team looks to evolve into a world powerhouse once more. “I’m looking forward to supporting our athletes and getting them back to the top of the game, whether that’s in the world rankings, top finishes at four-stars or top placings at the Nations Cup. I love this sport and I feel really passionate about. I’m looking forward to being a part of the future.”