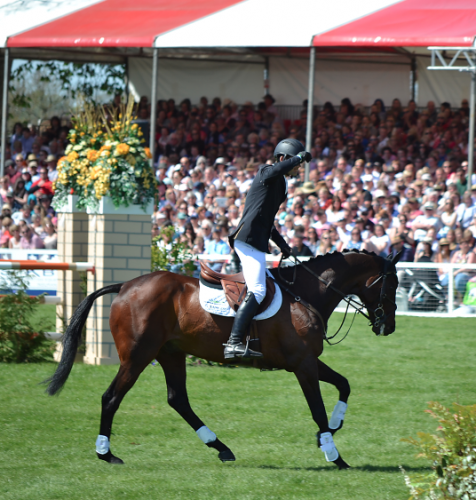 It was a conclusion no one expected at Badminton. Michael Jung and Sam jumped a beautiful show jumping round with just one fence to go, and Radio Badminton had already declared him the winner. But then the last rail fell in a shocking moment, making Jock Paget and Clifton Promise the winners of this year’s Mitsubishi Motors Badminton Horse Trials by 0.3 penalties in their debut at this event. Jock and Clifton Promise had never jumped a clear show jumping round at a three-day event until today, according to Badminton Radio (Note: they jumped clean at WEG 2010), and they picked an incredible time to step up to the plate, blocking the reigning Olympic, World, and European Champion Michael Jung from claiming a victory that seemed in the bag.

To make the story line even more exciting, this is Jock’s first CCI4* win, and he becomes the newest rider to win Badminton on a first attempt, the most recent being Mark Todd in 1980. Jock and Clifton Promise quietly stalked the leaders all weekend, sitting in fourth place after dressage and moving up to second place after cross country on the merits of a double clear trip. And he went double clear again today in the show jumping to clinch the win on a day when double clear trips were hard to come by. We saw 14 double clears out of 63 show jumping rounds on a day where every rail mattered, with just one pole down pushing riders far down the leader board.

William Fox-Pitt, who came into show jumping in third place, also dropped a rail with Parklane Hawk, pushing him into fifth place overall. Andrew Nicholson, on the other hand — William’s Grand Slam rival for the weekend — jumped a beautiful clear round with Nereo to finish in third place. The entire crowd rode that round with Andrew, and the atmosphere grew more and more tense with each fence. Sandra Auffarth also jumped a stunning clear round with Opgun Louvo, which moved her up to fourth place overall. She has a lovely partnership with this horse and rode superbly. That rounds out the top five in an order we certainly didn’t expect to see.

The first jump on course ended up being the bogey fence. Situated right in front of the VIP tent where hoards of people were seated, it became very distracting for the horses and caught out many riders, including Tiana Coudray. Tiana and Finn seemed rattled after that and dropped another rail later in the course to fall to 17th place. William smartly trotted by the first fence to show Parklane Hawk the crowd before starting his round, although he ultimately pulled a rail at the third element of the triple combination. The final fence on course also fell multiple times, with Michael and Sam being the most notorious pair to pull it.

Clark Montgomery and Universe and Rebecca Howard and Riddle Master claimed two of those 14 double-clear show jumping rounds, which moved them up to 27th and 12th place, respectively. Today was not Colleen Rutledge’s best show jumping day, as she and Luke had a number of rails down. But I still say to hell with the rails, as Colleen still accomplished her goal of completing five of the world’s six CCI4* events — something no one else in history has accomplished on the same horse. I hope Colleen and all of our North American pairs are proud of their performances here on a big international stage this weekend. And now we need to find a way to ship Colleen and Luke to Australia for Adelaide!

The riders are receiving their awards now, and Jock Paget, Michael Jung and Andrew Nicholson will attend the press conference immediately after to talk about their rides. I’ll be bringing you a full report on that after it concludes, as well as much more analysis from Badminton. We’ll make sure you get the photo hookup shortly. What an incredible finish to Badminton! Go eventing. 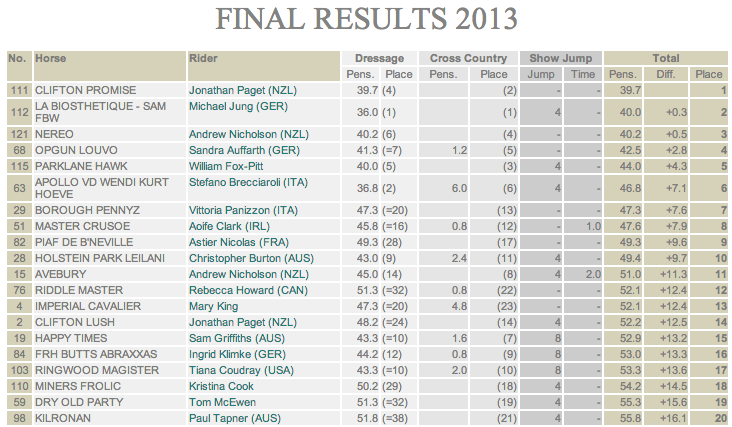