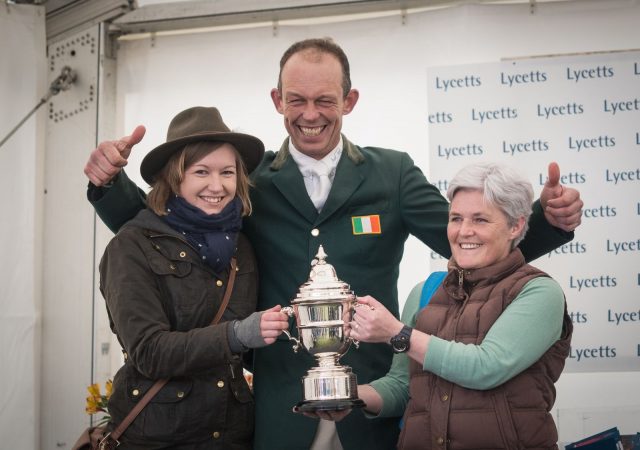 Jonty Evans and two of Cooley Rorkes Drift’s many thousands of supporters after his win at Belton. Photo by Tilly Berendt.

“Jonty’s family would like to express their thanks to the wonderful staff at the hospital and for all the best wishes and kind messages of support that have poured in over the past days. The family appreciate that people do wish to understand the nature of Jonty’s head injury, and we can confirm that Jonty has not yet recovered consciousness after his fall.

“Although no longer under heavy sedation, further tests in the past few days have shown that it is a significant brain injury and it may take Jonty many months to recover. The Beaumont Hospital medical team continue to emphasise that every case has to be treated individually and people’s recovery rates vary case by case.”

Jonty’s family requested once again that the public do not call the hospital for information, as the heavy influx of calls interferes with the hospital’s day-to-day operations. Further updates will be issued through Horse Sport Ireland when there are changes to his condition.

The EN team continues to send our best wishes for a speedy healing for Jonty.