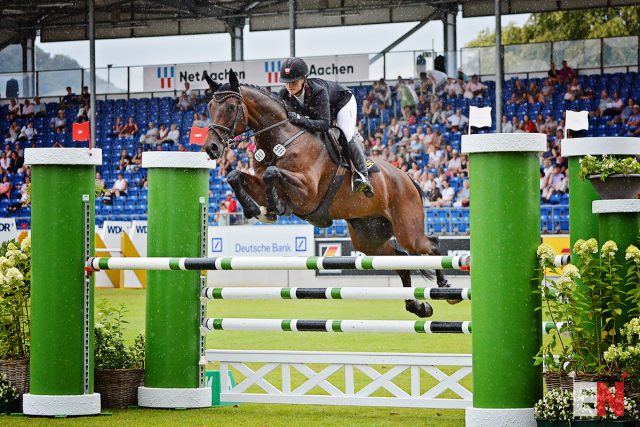 Julia Krajewski is completely crushing the competition at CHIO Aachen, delivering clear show jumping rounds with both her mounts to hold the lead with Chipmunk FRH on 19.7 and move up to second place with Samourai du Thot on 22.5.

Both horses have had incredibly strong spring seasons and are coming off respective wins. Chipmunk FRH, a 10-year-old Hanoverian (Contendro I X Havanna, by Heraldik I) owned by Dr. Hilmer Meyer-Kulenkampff, set a CCI3* record finishing score at Bramham when he won on his dressage score of 19.4. “Chip” also won the Marbach CIC3* in May. 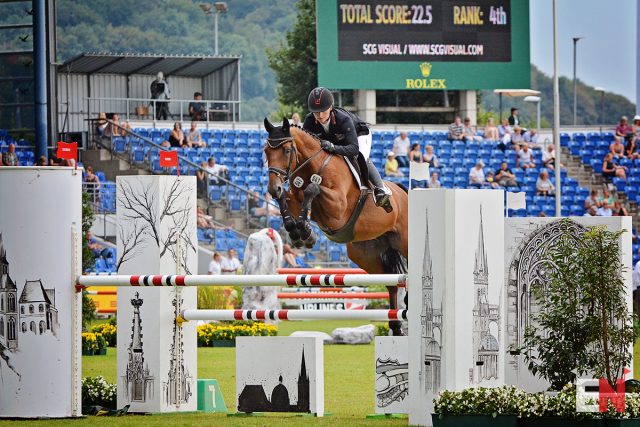 Today’s clear show jumping rounds are notable for both horses, though for different reasons. Samourai du Thot has had only two poles down in his last 20 international runs and is now on a streak of six consecutive clears. Chipmunk FRH had only jumped two clear rounds out of eight in the lead-up to Bramham, and it seems safe to say we are seeing a new form line emerging for this horse in show jumping following back-to-back clears over tough tracks. 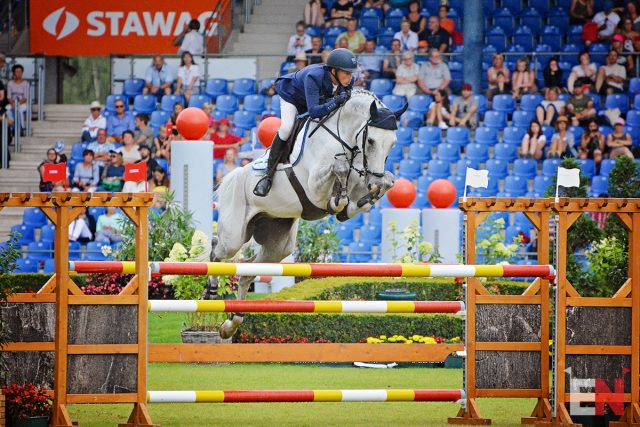 Tim Lips and Bayro, a 12-year-old KWPN (Casantos X Vanya, by Corland), are on the comeback trail following Luhmühlen, where a missed flag on cross country cost them a shot at the win in the CCI4*. The reigning Dutch National Champions delivered today, with a fifth consecutive clear show jumping round at international level moving them up from fifth after dressage to sit in third place on 23.3. 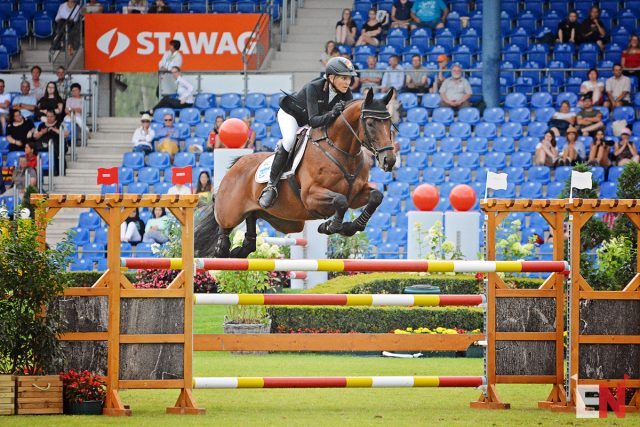 Reigning Aachen winners Ingrid Klimke and SAP Hale Bob OLD, a 14-year-old Oldenburg (Helikon xx X Goldige, by Noble Champion), sat second after dressage but had one rail down to drop to fourth place on 26.1. Despite the pole, “Bobby” has never finished lower than third at this venue, and his score is still boosting Germany to the top of the team standings. 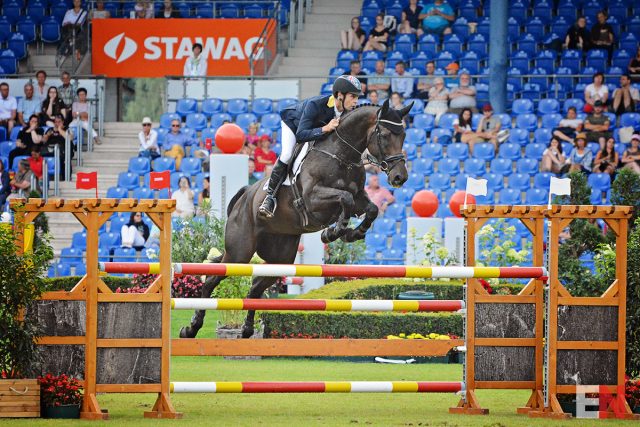 Two-time Aachen winner Chris Burton jumped a stylish clear for the Australian team with Claire Poole’s Quality Purdey, a 12-year-old Oldenburg (Quality X Lara, by Leonid), to move up from ninth to fifth on 26.7. This mare also has a win on her record this season, having topped the leaderboard in the Saumur CCI3* to secure her World Equestrian Games qualifier.

We saw a 27% clear show jumping rate today, with 11 of 41 pairs jumping clear rounds over Frank Rothenberger’s course. Dropped poles proved expensive across the board, and especially for the U.S. team. 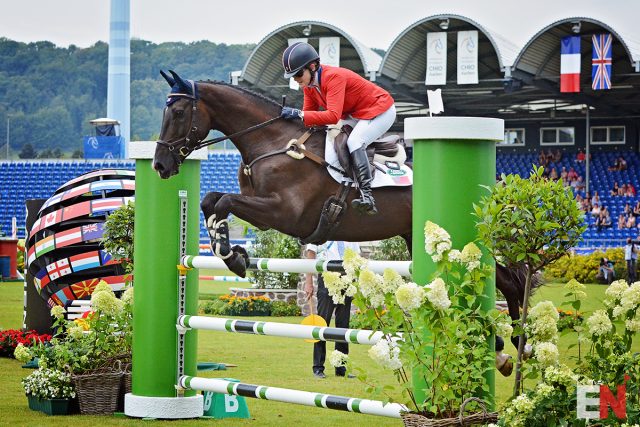 Kim Severson and Cooley Cross Border, an 11-year-old Irish Sport Horse (Diamond Roller X Whos Diaz, by Osilvis) owned by the Cross Syndicate, sat seventh after dressage but added 12 total penalties in show jumping to drop to 22nd on 37.5. After knocking a rail at the second fence, a miscommunication at the third fence resulted in a refusal and ultimately 4 additional time penalties. “Crossy” is still the highest placed U.S. horse following show jumping. 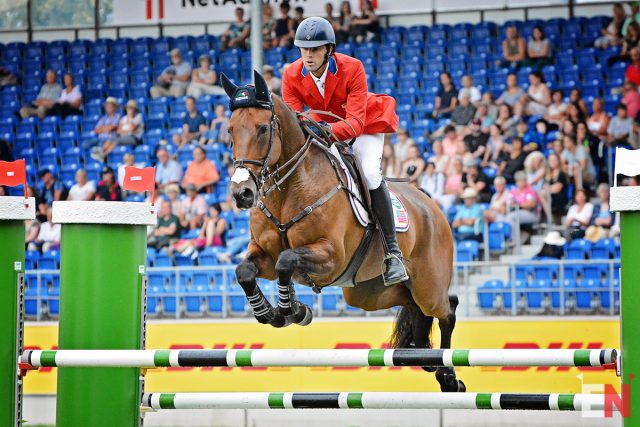 Will Coleman and OBOS O’Reilly added the fewest penalties for the team in show jumping, with one rail down at fence 6 still boosting them up 13 places on the leaderboard. “Oboe”, a 15-year-old Irish Sport Horse (OBOS Quality X Omard Clover Queen, by Clover Hill) owned by the Four Star Eventing Group, moved from 38th up to 25th on 38.2. 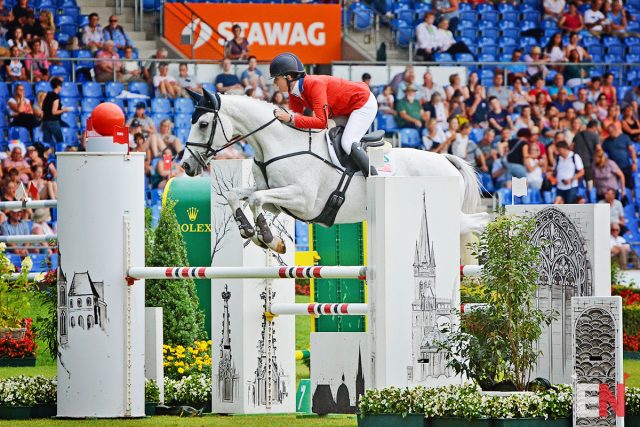 After delivering one of their best dressage tests to date this morning, Lauren Kieffer and Jacqueline Mars’ Landmark’s Monte Carlo, a 12-year-old Irish/Thoroughbred cross (Formula One X Glamour), knocked two rails at fences 5B and 6 to slip from 26th to 28th on 39.2.

Buck Davidson and Carlevo, an 11-year-old Holsteiner (Caresino X Ramatuelle, by Levernois) owned by Carlevo LLC, sat 19th after dressage and added two rails at the second fence and third element of the triple combination to drop to 33rd on 42.0. 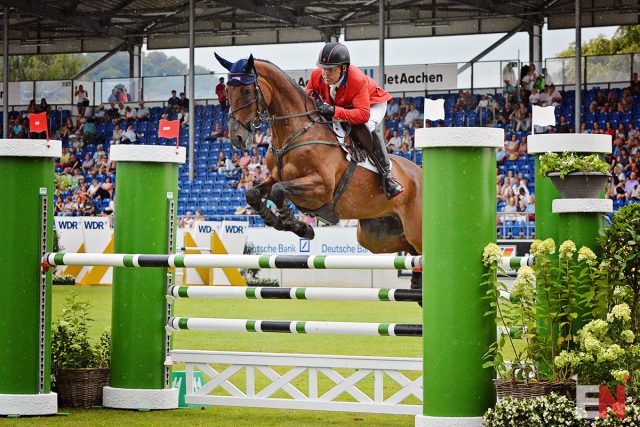 Germany still leads the team competition after show jumping on a score of 79.4. France moved up to second on 90.9 with all four of their team riders delivering impressive clear rounds. New Zealand slipped to third on 92.5. Click here to view team standings after show jumping.

The old adage says “there’s nowhere to go but up.” With the U.S. sitting in seventh place out of seven teams tonight, that is certainly true in respect to tomorrow’s cross country.

Rüdiger Schwarz’s course is notoriously tough, technical and twisting. Click here to view the course map. Five pairs made the time last year, but we have seen runnings of the CICO3* at Aachen in which no one beat the clock.

Here’s what our U.S. team had to say about the course:

Will Coleman: “It comes at you really thick and fast, and you have to be at it the whole time. They are fair questions, but it’s the intensity of it and the tight turns. For 7 minutes it’s going to be hectic and chaotic. You want to try to make it as smooth as possible and get your horse in a good rhythm and keep it the whole way.”

Buck Davidson: “To jump around it fast will be a challenge. (Carlevo) doesn’t love things over his head, like keyholes. At the first water where you jump in and then go under the bridge, I’ll have to ride him a bit there. I think he’s grown since Kentucky, so I feel good about tomorrow.”

Lauren Kieffer: “The course always kind of feels like a 7-minute CCI4*. You come here expecting that. I certainly have a bit of a beef with Aachen after the last two years. It’s nice that I’ve seen it two times so I know what to expect. We’ve definitely practiced everything that will be out there. Now we have to execute it.”

Kim Severson: “There is plenty to do. Number 4 is right up in your face. I need to get aggressive there and then stay aggressive with him and not leave any doors open.”

A lack of rain and severe heat throughout much of Europe over the past six weeks has resulted in dry conditions here in Germany, but the Aachen grounds crew absolutely deserve a medal for the meticulous care they have given to the ground this week. We couldn’t ask for better going given the circumstances.

You can watch cross country live on ClipMyHorse.TV at 10 a.m./4 a.m. EST. Click here to view the starting order. We have 38 pairs set to start tomorrow, as Tina Cook withdrew Billy The Red after show jumping, as did Peter Flarup with Frankie.

Keep checking back for more photos from this afternoon’s show jumping, which was pelted with periodic patches of rain. Keep it locked on EN for all things Aachen. Go Eventing.