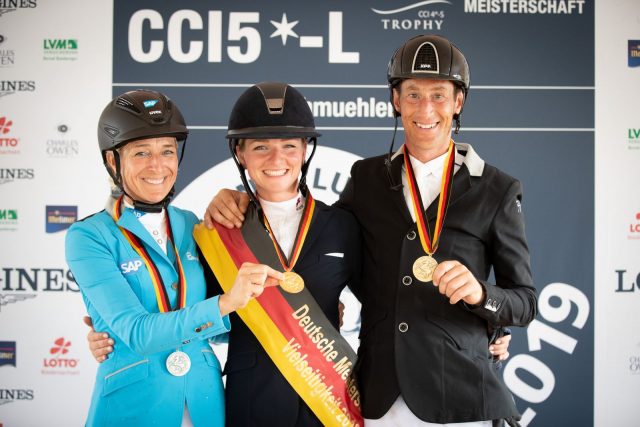 Julia Krajewski and Samourai du Thot successfully defended the German National Championship title at Luhmühlen, jumping a flawless clear show jumping round under pressure to secure the wire-to-wire win and take the CCI4*-S Meßmer Trophy on their dressage score of 24.7.

“Sam,” the DOKR’s 13-year-old Selle Francais gelding (Milor Landais x Melitos du Thot, by Flipper d’Elle), has a jaw-dropping record at Luhmühlen. In seven appearances at the venue, he has never finished outside of the top five at any level, and won the CCI5*-L in 2017.

“Sam thinks Luhmühlen is totally cool,” Julia said. “He always stands like a monument in the prize-giving ceremony, and I don’t know any horse I would rather ride into a show jumping course with, if my lead was only 0.1 points. The pressure was certainly on, especially since I saw from the entrance that Asha was jumping extremely well. I’m really happy — it’s just fun when things go so well.”

Asha, an 8-year-old Brandenburg mare (Askari 173 X Hera, by Heraldik xx) Ingrid owns with Dr. Andres Lauber, had two rails down in her CCI4*-S debut at Houghton Hall but jumped out of her skin at Luhmühlen to put the pressure on Julia.

“It’s so much fun to compete against Julia. We had a full showground today — but when Julia and I rode it was completely quiet! Asha jumped so well and was completely relaxed. She’s amazing. I’m very proud of our second place today.”

“He touched three or four poles, but luckily they all stayed put,” Dirk said. “I am super happy. We wanted to perform well here, and we did.”

Yoshi Oiwa and Bart L JRA, a 13-year-old KWPN gelding (United X Parisma, by Gribaldi) owned by the Japan Equestrian Federation, rose up from sixth place after cross country with a clear show jumping round to finish fourth on 31.3.

Andrew Hoy and Vassily de Lassos, a 10-year-old Anglo-Arab (Jaguar Mail X Illusion Purdue, by Jalienny) he owns with Paula and David Evans, were one of the four pairs to finish on their dressage score, moving up from 17th after the first phase to finish fifth on 31.8.

Michael Jung and Highlighter, an 8-year-old BE/SIES gelding (Caretino 2 X Traumerin, by Landgraf I) owned by the Jung Family and Anette Schmid, sat in third place after cross country but dropped two rails to fall to sixth place on 36.3.

Click here to view final scores, and click here to catch up on all of EN’s Luhmühlen coverage. Go Eventing.