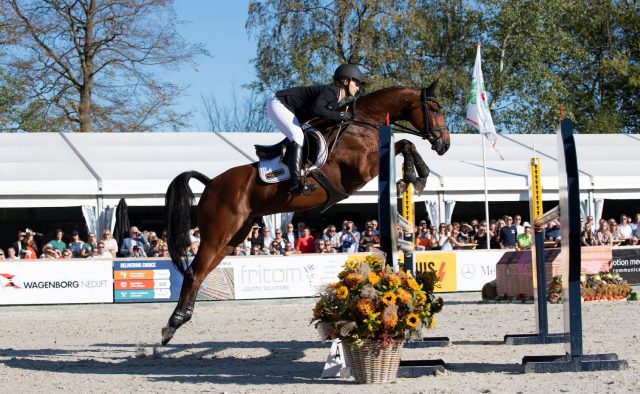 It all came down to the final round today at the Military Boekelo CCIO3* in Enschede, Netherlands. Germany’s Julia Krajewski, second after cross country with Samourai du Thot, said she intended to jump clear and put the pressure on overnight Dutch leader Tim Lips and Bayro, and she did just that.

Sadly, Bayro couldn’t afford a rail and ultimately lowered two, dropping them to third place overall and handing the win over to Julia and the 12-year-old Selle Francais (Milor Landais x Melitos du Thot, by Flipper d’Elle), who finished on their dressage score of 22.8.

Laura Collett and London 52, for Great Britain, left all the rails up and finished second on 24.7 in the 9-year-old Holsteiner’s (Landos X Vernante, by Quinar) debut at the level. Tim, for the Netherlands, and Bayro, a 12-year-old KWPN (Casantos X Vanya, by Corland) finished close behind on 27.2.

Niklas Bschorer, of Germany, and Tom Tom Go 3 show jumped clear, moving up four places to finish fourth on 29.8. Japan’s Kazuma Tomoto and Brookpark Vikenti‘s double clear round moved them up from 11th to fifth on a final score of 30.7. 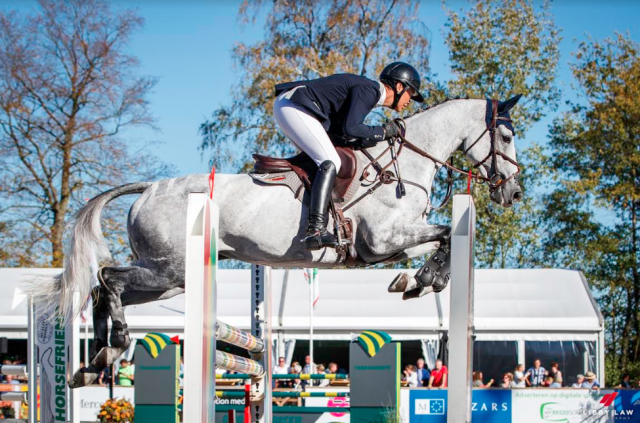 America’s own Tamie Smith and Judy McSwain’s Fleeceworks Royal jumped an impeccable clear round, adding a single time penalty for a final score of 34.6 and a top 10 finish. Their final phase performance moved them up from 16th to ninth.

“She has turned into a very rideable and dependable partner,” Tamie said of “Rory,” a 9-year-old Holsteiner mare (Riverman X Marisol, by Corofino I). “Now I have to just do my job right and she will do hers 110 percent and I’m absolutely thrilled with her. I couldn’t have asked her to be better. She didn’t touch a thing. She is such a professional!

“I feel so grateful to Judy, Rory’s owner, and my team that has helped me get here. I called Judy and Heather (Morris) the second I was finished to scream with excitement! Then I called Dave, my husband, who told me he woke up at 3 a.m. to watch the show jumping because he knew it started then. Poor guy was tortured for a few hours before I went but he told me that he was happy and it was worth the wait.” 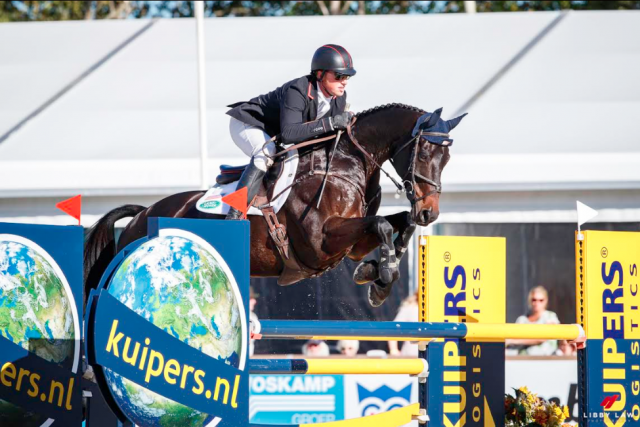 Doug Payne and Getaway, an 11-year-old Oldenburg gelding (Contendro X Ladula, by Lady’s King) owned by Lisa Wall, had an uncharacteristic four fences down in show jumping. A final score of 59.2 finished them in 40th place.

“To say today was frustrating is an understatement. Flynn and I did not have the round expected,” Doug said. “With so many great aspects this weekend, the future is bright. Following a well-deserved vacation we will be back to work. Huge thanks to Lisa and Bob Wall for their continued support as well as the USET Foundation for the opportunity. Flynn now heads home and we head to Le Lion in France with Quantum Leap.”

In the FEI Eventing Nations Cup, Germany won the team competition at Boekelo, which served as the Series Final. However, when the results over the entire season were tallied, Great Britain came away with the win with 570 series points. France was second with 540 points, followed by Germany with 420 points.

Thanks for following along with our coverage of Boekelo. We’re heading next to the USEF CCI3* and CCI2* Championships and USEA Young Eventing Horse East Coast Championships coming up at Fair Hill International next week. Keep it locked right here on EN. Go Eventing.