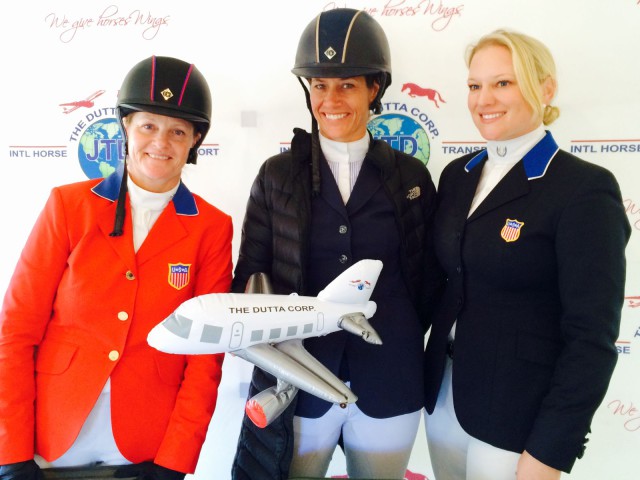 It’s been a decade since Julie Richards has enjoyed being in the international spotlight, and she burst back onto the scene in a big way yesterday, winning the Dutta Corp Fair Hill International CCI2* with Urlanmore Beauty thanks to jumping a double clear show jumping round.

Julie said the horse, an 11-year-old Irish Sport Horse gelding owned by Asa Cooper and previously campaigned as a Young Rider horse by Sarah Kamensky, jumped his heart out. “The horse is so generous; it’s just a really super animal that way,” Julie said. “I knew he would try. He touched one or two, and that always gives you heart palpitations, but sometimes it goes your way.”

In the last 10 years since winning a team bronze medal at the 2004 Athens Olympic Games with Jacob Two Two, Julie has developed a thriving training and sales business in her hometown in Georgia, as well as focused on raising her two children, Genevieve, 11, and Adam, 9.

A return to High Performance?

“I ride so much better now than I did,” Julie said. “I have to thank my business and clients for that. I have to talk about it and teach it and think about it every day, and then look at these horses and decide what they’ll be best at. It’s so fun; it’s so much more fun than when I was trying to get two or three horses to the top level. … Every day is a journey, and you put all the pieces of the puzzle together.”

But that doesn’t mean she’s ruling out making a return to the upper levels. “I love High Performance, and it’s what I did before I had all my children and during my children, so, absolutely, I would love to go into the top level again on my own time and with the horses I believe in, not just on any horse, because I have two very small children who depend on me. Everyone is cautious about what they do with their life. I don’t feel like I have to go and do it again unless it works out.”

So could it work out with Urlanmore Beauty? Julie said she feels like “Ricky” is a horse she “could jump a mountain on,” and now it will be up to the Cooper family as to what’s next for the horse. “This is a good thing for the horse to do for his eduction, so we’ll see if he wants to go the next step,” Julie said, adding she thinks a season at Advanced would be good for him.

The horse had a runout at his first CIC2* at Virginia Horse Trials in May and and then had two runouts before ultimately retiring in his second attempt at the level at Plantation Field Horse Trials last month. But he stepped up in a big way at Fair Hill, adding no jumping penalties to his dressage score of 43.6.

“I have taken my time with him a lot, and therefore he has very few holes,” Kim said. “I rode him very, very poorly at Plantation. He’s the only horse I have that’s huge with a big stride, and I was either completely right or completely wrong at each jump. I went to add in the water, and he just stopped like he was saying, ‘Do you know what you want to do here?’”

Then when she came to a gate and “kinda checked out,” she said Cross didn’t even realize he was supposed to jump it, and she decided to retire. “I have spent the last few weeks jumping and galloping oxers in the field and getting my eye back,” Kim said. “He’s such a good boy as long as you tell him what to do.”

Marilyn Little and RF Quarterman quietly stalked the leaders in the CCI2* all weekend, sitting in 13th after dressage, moving up to sixth after cross country and going double clear in show jumping to ultimately finish third on a score of 46.6 in the horse’s first CCI2 — and first season of eventing, for that matter.

A 6-year-old Oldenburg gelding owned by Raylyn Farms, Marilyn found “Fiddy” in East Germany last year as a green 5-year-old show jumping prospect. He spent the winter learning the jumper ropes at the Winter Equestrian Festival, and Marilyn took him to Ocala after the show to turn him out for a vacation.

“I thought it would be nice for him to hack out and jump some cross country jumps, and when he did, he just got it,” Marilyn said. “He jumped everything in the field at Jacqueline Mars’ Meredyth South and understood looking for the flags.”

So she decided to put him in an Open Preliminary division at Carolina International in March just to see how he handled it. He picked up just two time penalties on cross country to finish in second place on 30.3.

“He was the one who made the decision,” Marilyn said, adding “just because you buy a horse for one thing doesn’t mean you should close the doors to what might be the right road for them. If it’s what’s right for the horse, it’s what makes the journey the most fun in the end.”