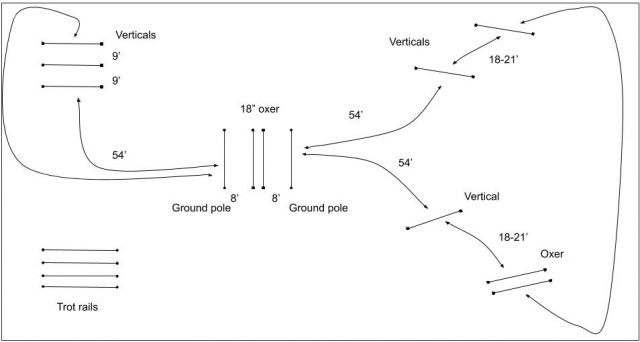 EN’s sister site Jumper Nation has teamed up with top, respected riders who we love for both their horsemanship and their creativity with exercises they use at home. Each week, they’ll be bringing us a new grid or exercise to try at home. You’ll be primed and ready for the show ring when we are able to get out there again! This week’s exercise comes from Doug Payne. Want even more? Click here.

This exercise consists of:

Doug Payne explains: “This exercise is all about the angles and footwork.  It can be either mentally challenging and physically easy, or mentally easy and physically challenging – that way, you won’t get into trouble.  You can do the exercise in parts and put it together as you go.  I have the oxer set up in my ring every day and like to do a figure 8 over it or a circle, then move on to other parts of the exercise.  You can also start with even just the trot rails, then move on and do the trot rails to the bounces.

“When setting up the angled jumps, use less angle with young horses.  Also, if you’re using placing rails and the oxer is very small, you may need to roll them in to 7′ instead of 8′.  You can even bring all of these jumps down to be completely rails on the ground.”

The beauty of this exercise is that when the horses, land, they have something to do.  They learn that it is to their advantage to land in a good shape, go straight, and listen to the rider.  They also quickly learn that they need to be aware of their feet.  This exercise won’t prevent the horse from making mistakes; it encourages him to be careful and to focus.  The horses learn that the rider is there to help them out, but if they run through the rider or aren’t listening, there is a price to pay (an uncomfortable jump, a rail, etc).  The overarching goal is for the horse to focus without losing confidence (hence why the jumps should be kept on the lower side). 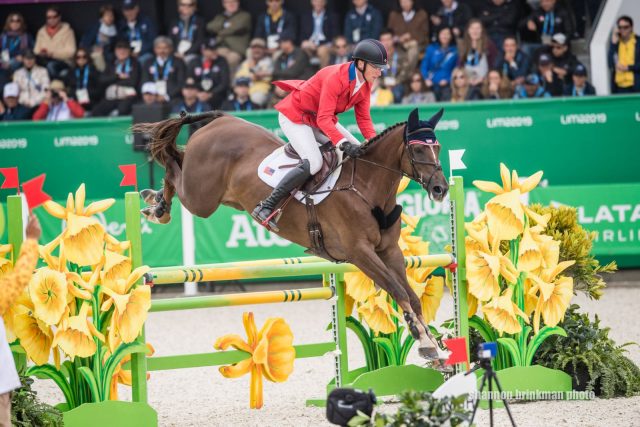 Doug Payne is a 5* event and Team USA PanAm gold medalist.  He also competes in Grand Prix show jumping and has won numerous Grand Prix classes most recently at HITS Ocala.  Doug additionally is an FEI dressage and USDF silver rider.  He is a USEF judge, author of The Riding Horse Repair Manual, and clinician.  He is also a mechanical engineer and a pilot.  DP Equestrian is based in North Carolina in the summer and South Carolina in the winter.  To learn more about Doug Payne and DP Equestrian, click here and be sure to “like” and follow Doug on Facebook and Instagram.