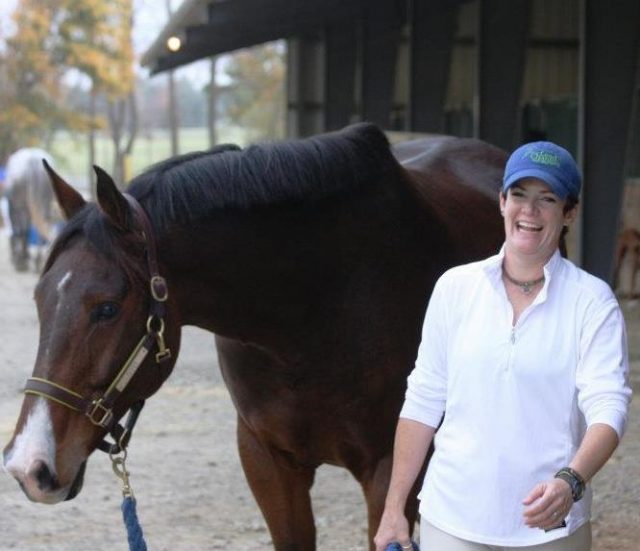 I look normal, right? I mean, as normal as any horse-crazed eventer can be… Well, it’s been anything BUT a normal summer. Or really a normal past few months. In fact, I’m starting to doubt the actual existence of that word.  Webster defines normal as “the usual, typical, average state or condition.” Hmmm… Maybe my “normal” is everyone else’s crazy or stressful or dramatic. Melodramatic really, almost like I’m living in a reality show NOT of my choosing. Sigh. But I digress.

It’s been a summer of learning how to just keep swimming, to persevere, to roll with the punches and simply not quit. Not just in my riding, but in life in general. Let me preface this by saying that my husband and I both work in the service industry. He’s a hairdresser, and I’m a server/bartender at a high-volume restaurant, both of which bring with them their own amount of drama. It’s just the nature of the industries we work in. I usually find my peace and my recharge at the barn. My stalwart, tried and true, best friend of a gelding has been with me for 13 years (he’s 17 now) and I literally trust him with my life. We have one of those partnerships that can easily be taken for granted. Syd is truly my heart horse.

Enter Mother Nature. This past spring in Area V (where I live) has been a mess of rain, wetness and storms. (Ironically, we’re in the throes of hurricane Barry as I write this.) At least two events in Area V were canceled with others continuing in the deluge. My home state of Arkansas had one of the wettest  seasons on record, and my hometown of Little Rock had hundred-year floods and federal disasters. Ride time became a premium. Mud and rain rot a staple. And don’t even get me started on the mosquitos! My happy place was hard to find right when I needed it the most.

Back when the rain was really getting started, the rental house my family was living in became its own disaster area, and we decided it was time to find a new place to live. Rental property in Little Rock pretty much falls into two categories, undesirable or too expensive. Factor in the fact that we have three Great Pyrenees dogs and a second grader that needs a good school and well, it’s been tough to find a place to live. In an effort to save money and keep looking on our own terms, my husband and I decided that this would be the summer of endless camping. We parked our camper on my brother-in-law’s property, and moved in. As with any life-altering decision, there have been pros and there have been cons. The pros: it’s like living in a tiny house, so I don’t have a lot to clean (!), and we are saving money. The cons: it’s like living in a tiny house with three humans and three human-sized dogs. And have I mentioned that I’m a bit OCD about clutter and cleanliness? Um. Yeah, do the math. It’s been months of really needing my ride time, but not getting much of it. 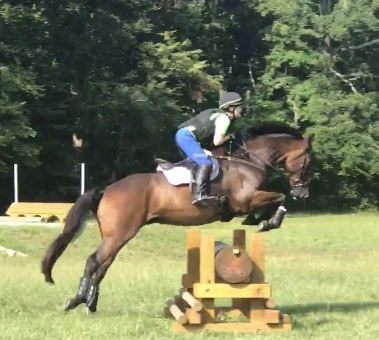 In spite of all the craziness, somehow my “endlessly stuck at Beginner Novice” self found the hutzpah to pick itself up by the boot straps and really get down to business with the jumping. I am very blessed to board at a private farm that has an awesome arena and even more awesome cross country schooling. When it wasn’t too wet, Syd and I actually started successfully schooling some big stuff (Training level, which is big to me; Syd’s  ready to hit Land Rover.) and really making progress in our quest to end our run at BN (totally all my issue, not his!) A switch within me finally got flipped, and the whole eventing world changed colors.

Then the theory of convergence took over, and it happened. I was schooling cross country with a friend when Syd refused a small, very friendly roll top that we’d jumped with no issues in the past. What the heck?! It took me three tries to get him over a jump he could have walked over! My adult amateur mind immediately defaulted to its “happy” place and began to overanalyze. Is he sore? Does he need to be shod? Is he overdue for hock injections? Did I send him “refuse” vibes? Is it a full moon? Did I not hold my face right? What?!

I decided to give him the day off and try jumping in the arena when I rode again. At first, he was fine and then it happened again. He refused. This time just a normal, not scary stadium fence. Syd has refused probably less than 15 times in all the time he’s been jumping. It just isn’t like him. At all. In fact, when I told my trainer her response was, “WHAT?!” This time I was in tears. The dam broke, and it was as if all the frustrations of the past few months came flooding out at that moment. And in that moment, I had two choices: give up or get it done. The Beginner Novice me wanted to call it a day, get in my truck and continue the cry fest. The schooling Training level me said, “Find a way to get him over the fence and then figure out why this is happening.”

Eventers are a persistent, hard-headed, wonderful, get it done group of folks. I am very proud to be one. That day, I lowered the fence and jumped it. Then I raised it a tad and jumped it again. THEN I quit for the day.

As it turns out, Syd was a little foot sore from all the wetness and had a bit of thrush. After some time off and new shoes, he’s fine. And so am I.

I’m still camping, but I’m still swimming (no pun intended.) And after a little mental schooling for me on the power of persistence, I will continue to swim my way to my first Novice this fall.