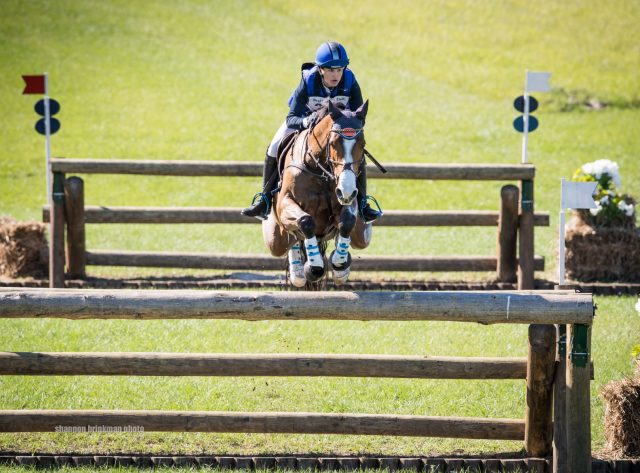 Katherine Coleman could have run Monte Classico in his first CCI3* at Boekelo in The Netherlands last month, but she chose to postpone his debut at the level until the Ocala Jockey Club International Three-Day Event so she could run him on home soil. The decision paid off on cross country day today, with a clear round and 4.8 time penalties rocketing them to the top of the leaderboard.

Katherine has produced “Monte,” a 9-year-old German Sport Horse gelding (Monte Bellini X W-Sally, by Saami xx) she owns, from a 6-year-old after he was originally sourced through Bettina Hoy in Germany. No pairs caught the optimum time of 10 minutes on Clayton Fredericks’s CCI3* course, but Monte’s round was one of the fastest.

“He answered all the questions. He was really good through those angled brushes. I thought they walked quite hard — especially in comparison to the rest of the course — but he was just on it everywhere. After those two corners (at fence 13) it was like he was flagging a bit, but he really picked up coming back up the hill. He got his second wind and then was really good the rest of the way,” Katherine said.

“I want to start getting my horses out and seen on U.S. soil because I feel like I’m abroad so much that they don’t really get seen,” she said. “I think it’s key for him — especially this year to be competing in the U.S.”

A Louisiana native, Katherine is based in England for six months of the year and in Ocala for the winter season. With all attention now turning to the 2019 Pan American Games, where the U.S. must secure qualification for the 2020 Tokyo Olympics, Katherine — like her fellow team riders — are firmly focused on next season.

If we are looking to the future, then Monte Classico absolutely has to be a horse firmly in the conversation. He has impressed across the board as he’s moved through the levels, and definitely turned heads when he finished 15th in the Blenheim CIC3* 8- and 9-year-olds class in September.

“He’s really grown up this year. I think he’s a really serious horse on an international level — under any competition. He was second going into cross country at Blenheim 8- and 9-year-olds behind that lovely horse of Laura Collett’s (the winner, London 52) and I just had, again, some time around that course — but really answering all the questions and super to all the fences. I do have that in mind — that I’m producing this horse for that future.”

Katherine said her fingers are crossed for show jumping tomorrow, as she will not have a rail in hand over Lauren Kieffer and Jacqueline Mars’s Paramount Importance. Lauren and “Louie,” an 11-year-old Holsteiner (Pasco X Gesche II, by Louis), delivered the fastest time in the division, coming home with 4.0 time penalties to move up to second place on 37.1.

Joe Meyer and Johnny Royale are in the hunt for a chunk of the $5,000 in prize money allotted to the top placing Thoroughbreds in the division thanks to a speedy clear round around Clayton Fredericks’s course. The 10-year-old New Zealand Thoroughbred (His Royal Highness X Chivaney, by Tights) skipped around with 5.6 time penalties to sit in third place on 41.8.

Of the 11 combinations that started on the CCI3* course, seven completed clear without jumping penalties. Dressage leaders Kristen Bond and Enough Already had a gutting runout at the double brushes at fence 20B. Leslie Law and Voltaire de Tre and Jacob Fletcher and Atlantic Domino also came to grief at the brushes. 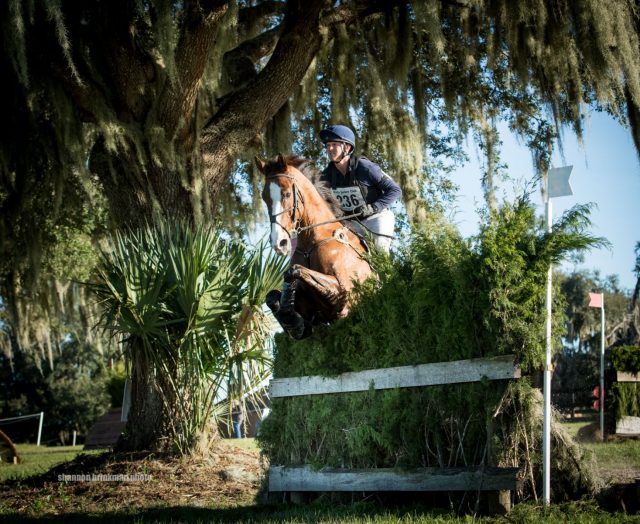 Looking to the CCI2*, Alex O’Neal could not afford a single time penalty with Fury H to hold his overnight lead after dressage, and he cruised around 28 seconds inside the time to hold first place on 29.5.

“Marvin,” an 8-year-old KWPN gelding owned by Sally Cox, was one of 22 horses in the CCI2* field to make the optimum time of 10 minutes, with his natural galloping stride easily eating up the ground. We had absolutely perfect going for cross country day today thanks to the diligent effort of the grounds crew. Coupled with the fact that Clayton designed a a flowing, open track that really invited horses to settle into a cruising rhythm right out of the start box, the CCI2* track rode beautifully.

“I think the first couple minutes you had to come out and ride really positive and forward because there were some big tables, and by the time you got to the first water you wanted to be moving, so I think everyone came out really positive,” Alex said.

“He’s a total beast, and that’s something I’ve had to get used to because I’m used to pushing horses along the whole way. But (with him) once I get out and jump five fences, I just kind of stay there. He’s such a big horse that you just have to trust that rhythm, take your time in the combinations and know that he’s going to keep traveling. He ends up being really efficient.”

Doug Payne and Starr Witness, a 7-year-old KWPN mare Doug owns with Catherine Winter and Laurie McRee, also caught the optimum time with a classy clear round to remain in second place on 29.6 in the horse’s debut at the level.

Gabrielle Ruane and her own Lismakeera Brewski, a 9-year-old Irish Sport Horse gelding, cruised around 16 seconds inside the time to move up to third place on 29.9.

You can catch up with ALL the action in the CCI3* and CCI2* in EN’s cross country live updates, AND you can rewatch all the cross country action from the CCI3*, CCI2* and CCI* on EQTV Network’s Facebook page.

Looking to the CCI*, the top of the leaderboard remained unchanged. Tamie Smith and Ruth Bley’s Danito easily caught the optimum time of 8 minutes, 52 seconds, coming home 21 seconds inside to remain on their dressage score of 22.6.

“I went out of the box and I felt like I was loping, and I didn’t have to pull on the reins. It was a long track but also feels like old-school eventing. It was gallopy and open and the footing was fantastic. This venue is just unbelievable. I can’t say enough about it.” 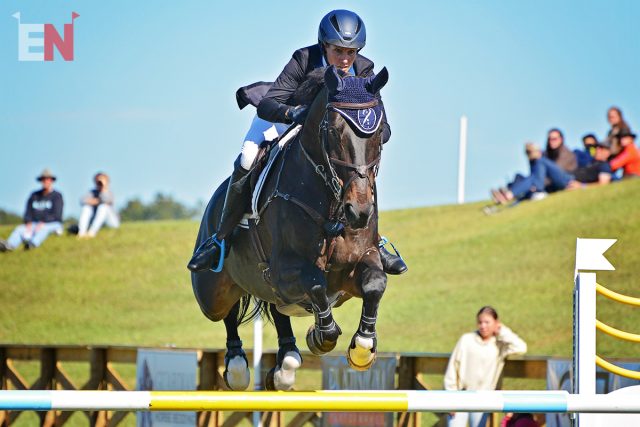 Liz Halliday-Sharp also held her lead today in the CIC3* division with Deborah Halliday’s Fernhill By Night, who jumped a super clear show jumping round over Chris Barnard’s course to keep first place on 27.2. She also led after the first two phases last year and is on a mission to seal the deal on the win this year as we look ahead to tomorrow’s cross country.

“He’s had a really great season and he’s on the best form he’s ever been on this year,” Liz said. “He’s capable of doing everything out there. There are a few difficult questions, and they require serious, accurate riding, so I need to go out and attack it.”

Felix Vogg and Jürgen Vogg’s Colero jumped a clear round to move up to second place in the CIC3* on 30.8. Liz Halliday-Sharp also has a second ride in the top three in The Deniro Syndicate’s Deniro Z, who delivered a super clear to move up to third on 31.9.