From John: A few weeks ago I sent Katie an email passing on a reader’s email request that she write one of her funny fake interviews with a special target…me.  My only requirement was that she should have a lot of fun at my expense.  As always, Katie did a brilliant job with this interview despite the fact that I have never had the pleasure to meet Katie in person, although apparently she saw me running about at the WEGs from afar.  Thanks for writing this Katie and thank you for reading.
—- 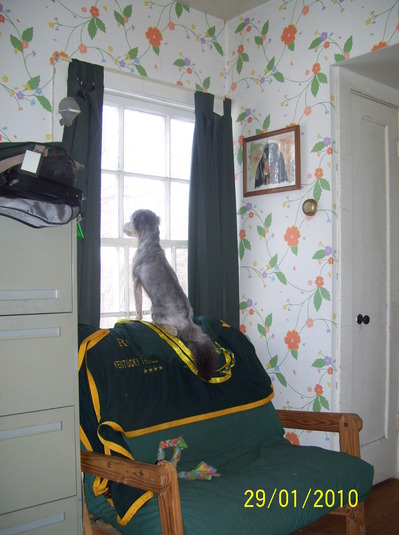 We eventers traditionally get excited about “flavors of the month,” (or “fads” as my drunken Aunt Lulu used to call them). A famous eventer wins a big competition using a Schmertz-Meirkenlinker bridle. Sure enough, within a month, Schmertz-Meirkenlinker bridles are seen at every level of competition all around the country. It would seem that everyone hopes to find a one stop shopping solution to whatever problems arise while trying to put together three passable phases of competition.

The latest fad creating a stir in the eventing world is CrossCountryChaos, a quasi humorous web/news/blog type site that popped up about a year ago, and much like The Daily Show’s relationship with traditional news shows, it has slowly evolved into being  the ultimate word in all things eventing – at the moment anyway or at least until the next fad comes along!. The emergence of this site and its subsequent spin offs, YukYukPony and DownTheRoadCountry, came to my attention when someone closely tied to the more conservative end of the sport referred to them as “idiotic piles of journalistic crap.” With such an introduction, and having a strong penchant for both idiocy and piles of journalistic crap, I immediately decided I would like the sites and bookmarked them for a daily read. I liked them a lot. Along the way, I also became increasingly intrigued with “Dug,” the individual behind it all. I decided that an interview would thus be in order. The problem with my plan was that Dug cloaks himself in a sort of weird anonymity that makes a positive ID somewhat challenging. However, being a stubborn Scorpion, and having survived interviews with Brittiffuffy, Gretel and Lance, three “typical” riders in hunters, dressage and eventing respectively, I motored on with probably more determination than sense.

The Dug stalking venue I chose was a large eastern event, Nifty Meadows CIC One and Two Star and Horse Trials at Advanced through Preliminary. As is my wont, I had done some preliminary research on such reliable (?) sites as wikipedia and facebook and discovered that Dug had experienced a successful young rider career not too long ago and currently competes an Intermediate horse, “Kilimanjaro XXIII.” (I wonder what may have become of Kilimanjaro I through XXII?) Referring to the accepted rider list for NM, I didn’t see Dug’s name so I reasoned that he’d be there in 100% blogger mode. The people I talked to who had had dealings with him, described him as smart, fun, passionate about his sport, and generally very UP-standing so I felt optimistic about the success of my day.

(An aside note – any reader who is a clever movie buff may be able to predict what track this interview might take from a couple of thinly disguised hints above. Read on MacDuff.)

It was a gorgeous fall day at Nifty Meadows when armed with my trusty old tape recorder and notebook, I arrived to start my stalking. I hadn’t a clue how I’d find Dug, but decided to play a little game with myself and not ask for help unless totally stymied. (This by the way is a technique I’ve perfected “BGPS,” Before G.P.S., when I’d find myself lost, an all too frequent occurrence.) I had only a vague idea of what Dug might look like – and the general description I’d received could have basically fit 75% of the male population on the grounds of the event – young, tall and skinny. Was he nerdy or jock? Preppy perhaps? Maybe Goth which would add a whole new dimension! I was damned if I was going to ask for help.

I was watching a Two Star dressage test ridden by a “not-so-famous” rider when I was distracted by a mysterious clattering from somewhere behind me. Turning around, I realized that I had found what must be the elusive Dug – or rather he was about to literally stumble into me. He was quite a sight to behold. Young, tall and skinny. That much was true – but this only told a quarter of the story. The apparition before me was clad in well worn jeans, a polo with the name of an event emblazoned on it, and a vest advertising a second event.  Crumpled wads of paper were stuffed into the pockets of his jeans. He had on ratty Reeboks and socks that upon closer glance turned out to be two different colors – one white and one tan. The ensemble was topped off by a faded baseball cap sporting yet another event’s logo jammed down crookedly on his head, a Bluetooth headset, and shades. Maybe this was a part of his anonymity gig? What made the whole look remarkable was the incredible amount of electronic gear he was toting around. A state of the art MacBook, three holstered IPhones, two cameras slung around his neck, and a backpack from which I thought I could see protruding the corner of an IPad. This guy was a walking Apple gizmo store! He was also yakking into his bluetooth while trying to operate a video camera that was running while pointing straight down to his feet. (I recall that he said on one posting that he was a less than adequate videographer. I could see why!)

After watching him field at least four calls and two e mails and snap a half dozen pictures within a 90 second time span, I took advantage of a seeming break in the action and approached this whirling dervish with my standard “unintelligible name and credentials” introductory preface.

D – (somewhat breathlessly) “Yeah, that’s me. How did you know me? I try to keep a really low profile.”

Me – (deciding to ignore his question and opting to take advantage of the brief window of opportunity). “I’ve become quite a fan of your various sites and tweets and would be interested in talking with you about your work which seems to have gathered an impressive fan base in a very short time. Would you agree to an interview? How did all this start?”

D – “Great. I’m happy to be interviewed. I love talking about my websites. After my young rider days, I began playing around with the idea of a website about my favorite sport, eventing. I enjoy writing, and I’m pretty tech savvy so it seemed to be a natural fit to combine all these interests. Oh gosh, scores just came up and Karen posted a 30 on a young horse. I have to tweet the live score update. Excuse me for a sec.” (time out while this was achieved in quick time on one of his many mobile devices.)

Me – “You have three websites. How do you keep up with them all?”

Me – (starting to get a queasy feeling about how all this is going) “Sure, whatever. It’s interesting watching you work. With all this, how do you manage to fit in riding time?”

D –  “I don’t get much sleep – but hey, it’s all in a day’s work. I love horses and love being a rider. I’m hoping to compete Killy next week. We’ll see how …. Oh look, that’s Boyd on his new horse in the far arena. I interview Boyd a lot for CCC. He’s great. Last time we talked, he – er – what was your question?”

Me – (starting to look for a graceful way to end this fiasco which is not really going anywhere and is also making me very tired) “Where do you get your material? Do you have a regular group of contributors, and how do you find them?”

D – “My material? I don’t know. I guess I’m just naturally nosey. People like to tell me things. Like I said, I’m focused and a good …… SQUIRREL ….. I’m focused and …..  oh, a text just came in that I have to answer right away. Please excuse me. It’ll only take a minute, and then I’ll tell you about the writers who contribute to my sites. As I said, I’m a really good at multi-tasking. Isn’t that what you asked me?”

Me – (resisting the urge to stuff one of his mobile gizmos down his throat) “Look, I can tell that this is a pretty busy time for you. Would you have about five minutes to sit down in a quiet spot and chat about where you foresee yourself going with your sites? Maybe later on today?”

D –  “Sure. That would be fine. I think I’d like that. I’m really excited about my websites. So many people seem to like them, and I’ve even gotten some sponsorship. It is primarily a site for and about riders, but we publish a lot about other aspects of the sport too as well as a ton of humorous stuff. I’m going to walk the courses now so I can live blog on cross country day. You could come a long with – or I can call you when I’m through. Maybe that would be best. Which would you prefer? I could post a poll on the site and let the readers decide.”

D – “Hahaha. That’s funny. Maybe you could write something for CCC?”

I wandered off in mid sentence, but I don’t think he noticed because at the same time, one of his mobile phones rang while another text-chirped, and he had to do some serious gizmo juggling to deal with them. I was feeling both overwhelmed and exhausted by the energy and pure passion I’d been in the presence of and decided to head for some peace and quiet. What I most needed was a dark, stimulus free environment where I could try to make some sense of it all. Maybe a padded cell? There is little doubt that Dug has made a positive impact on the eventing population and on me, but at the rate he’s going, I wonder if he has the energy to keep up with what he’s undertaken. I hope so! He is indeed multi-faceted with I suspect a sensitive side in there somewhere, and that makes him interesting. I hope I get my interview later on.

Perhaps switching to decaf would help smooth out his day to day operation?
—-

*Note: this video might help clarify a couple of the movie references