Kim Keppick, who worked for Karen O’Connor for 10 years, had a special bond with Biko, as she competed him through Preliminary in the early days of his career. Many thanks to Kim for sending in this touching tribute. (Editor’s Note: Kim apologizes for both her throwback hairstyle and lack of helmet. EN recommends wearing helmets at all times when mounted!) 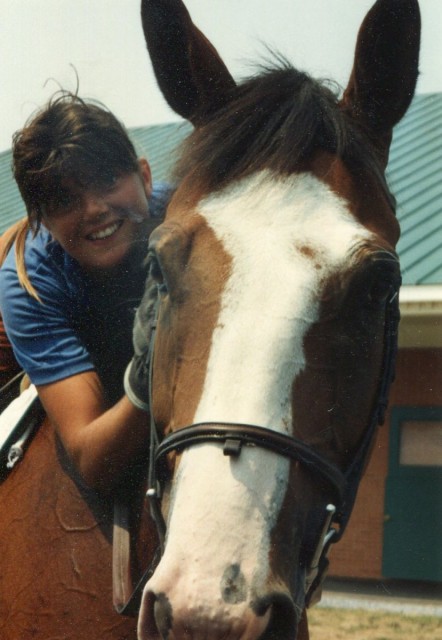 Snapshot of Kim and Biko in 1991. Photo courtesy of Kim Keppick.

What a wonderful horse Biko was. I can’t thank Karen enough for the opportunity to ride/train and compete him through the Preliminary level. Karen Lende (now O’Connor) was wonderful to work for, and what a fantastic education I received during the 10 years I was with her.

As Karen has said, it took Biko a while to trust his American life and the people around him. But William Micklem knew Biko had Olympic potential, and he was right. I may be incorrect, but I don’t think Biko EVER fell or caused a rider to fall (other than bucking them off early in his life!), either in training or all the competitions he did in his lifetime.

While we are sad he is gone, he had a wonderful life and a happy retirement and made it to 30 years old!  It is a tribute to Karen for doing such a fantastic job with Biko in competition, management and his retirement.

Biko was truly bug eyed when he arrived at Jimmy Wofford’s barn where Karen was training at the time. He did not care that he was in a stall once occupied by former stars Carawich and Castlewellen. My job was to start him like a complete baby, not because he knew nothing but because he felt so insecure in his new surroundings. It was difficult even to put a blanket on him at first. So I took my time and was allowed all I wanted by Karen. I did earn his trust, and he never bucked me off. 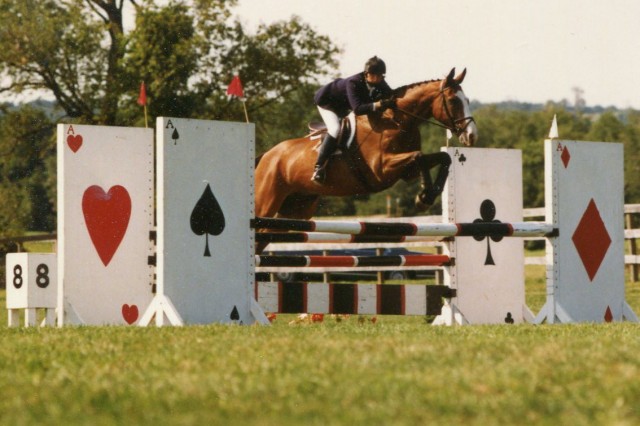 Loading him on the gooseneck trailer was not an easy task. I did not know about the tap-tap method from John Lyons that I use now. Nevertheless, I got it done, and for a long time, I was the only one that could load him. So much so that when Karen decided to ship her young horses to England, she asked me to come to New York with him to make sure we could load him safely on the plane. I had worked with him for four years, and he was a solid Preliminary horse and ready to move up. The loading went smoothly.

Once Biko did trust you, he was a treat to work with. Very easy to jump, never spooky, careful but not in excess for an event horse; he was a simple point and jump. When Karen left for England with her older horses, she moved Biko and other the young ones to Longbranch. I would play in the fields where they had cut hay, making a “course” out of the hay bales. I always searched for natural ditches, natural water, etc. It was not official cross-country schooling, just simple fun — the way I played with ponies and horses in Ireland before coming here.

I loved Biko, and he knew it. If I did not win a competition on him, it was due to my lack of skills. He had so much talent, was so willing and a joy to ride.

It was wonderful to see him go on with such huge success with Karen here and abroad. I have not forgotten that he earned the title of USCTA Horse of the Century. I hope you haven’t either.