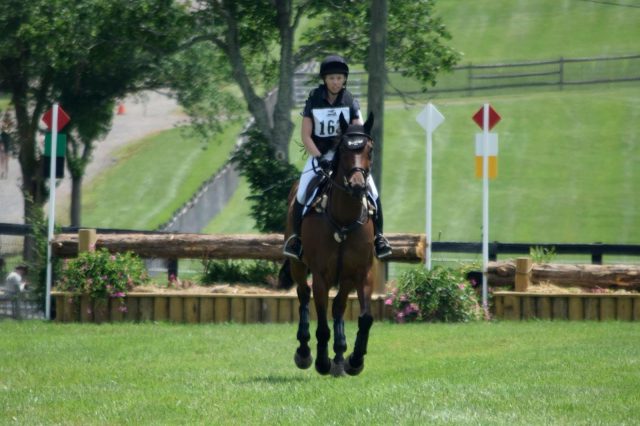 Some of you may remember me from last year when I wrote about the wonderful season I had despite losing my mom in January of 2017. Unfortunately the event season of 2018 would not be as beneficial to me or go as well as I hoped. Back in April I was so pumped for the start of the season; I won my first Thoroughbred Incentive Program (TIP) award at NJ Region Pony Club schooling show. This to me was a large accomplishment had been aiming at that for a long time with Quatrain. A few weeks later we go to Plantation Field, where we held on to third place until I decide retire at the first cross country fence.

A few weeks later I would learn that my heart horse and teammate of the last five years would now be facing the starting stages of navicular. A few weeks off and couple thousand dollars later, he be allowed to return to work. We aimed toward Essex Horse Trials for the second event back of the year. Everything was good and fine until I let myself and my mount down on fence nine on cross country.

A few weeks later I headed to a jumper show to sharpen up on my show jumping skills. At the point I would begun to see the confident rider I was last season was no longer in me. I would head out to an cross country school before Riga Meadows Horse Trials. It was there that my issues creeped in on me again: retirement second fence in show jumping. So back to jumper land I went and each round got so much better. I was pleased that Quatrain and I finished seventh out of 20 in one of our classes.

Then, boom, Quatrain was lame again one day. The vet came out and determined road hacking for conditioning at a walk wasn’t the smartest strategy, and that Quatrain (“Poe”) would benefit from some heel pads. The vet reminded me that when dealing with navicular it’s best to provide them with the best footing.

Most recently I’ve made one of the toughest decisions: to stop eventing Poe and move him to dressage and show jumping. I know Poe loves his cross country. He’s always been the horse that if I was on he was right there with me ready to tackle the challenge. As the decision didn’t come easy to me and part of me wanted to say keep eventing him. I know in order to keep him going it would mean a career change.

Even though we were just beep bopping around Beginner Novice, I knew had to do right thing by Poe. A few weeks ago someone said to me your record with him is one hot mess. I just smiled. That person doesn’t know the chronic Lyme I’ve faced with this horse or the suspensory injury that resurfaced three years after owing him. Along with the EPM that was very scary.

Some have said, wow, that took a lot of courage. I said wonder why?! We should always be putting the animal first. Yes, I wish I could qualify for the American Eventing Championship next summer at Kentucky. I know that won’t happen. I know being a young amateur working a full-time job and two part-time jobs, we sometimes have to do what is not easy. What I have accomplished, I couldn’t have done without the amazing village that stands behind me! I know that one day I’ll make my return to the event world.